Shell gave its outlook for the LNG market during a media briefing yesterday. Afterwards, a number of news reports emerged saying that Shell predicted no oversupply in the LNG market.

Shell gave its outlook for the LNG market during a media briefing yesterday. Afterwards, a number of news reports emerged saying that Shell predicted no oversupply in the LNG market.

I nearly choked on my coffee.  What are they talking about?

Well, we listened to Shell’s comments again.  It seems like the company said something more nuanced.

“In 2016, we didn’t see an oversupply… for the rest of the decade we expect strong supply growth but also strong demand growth and to the extent that there’s an imbalance between the two, we believe Europe can easily absorb those volumes,” Shell gas marketing and trading executive Steve Hill said.

So is the LNG market oversupplied?  Perhaps it depends on the definition of oversupply.

It is true that all LNG produced in 2016 found a home.  But that is true every year because of the way expensive liquefaction projects are financed and because regasification capacity is underutilised. Even if the LNG price is below the breakeven price, it is still better to claw back some of the investment than to shut down the export facility.  And because liquefaction facilities are so expensive to build — or were built so many years ago that the project has been paid off, or makes all its money from associated condensates anyway — they are never shut down because of low LNG prices.

It is true that new importers have emerged over the last few years — including Egypt, Pakistan and Jordan — which have absorbed some of the new production — or kept it away from Europe, if you will.

But Shell also said that the credit ratings of some new importers are lower than for previous buyers, which is a sign of producers’ willingness to accept more risk to find LNG customers.

It is also true that in Europe, regasification capacity is underutilised so there is more than enough import capacity to absorb any uncommitted LNG production.

So is the LNG market oversupplied?  Perhaps we should take note of the price difference between the Argus northeast Asia (ANEA) LNG price and the UK NBP gas price (see graph).  ANEA is usually the premium market for gas.  The UK is a buyer of last resort, so it has capacity to buy but only at the domestic gas hub price. 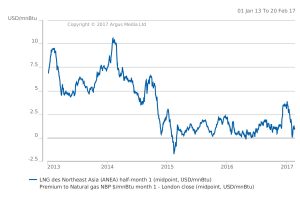 So does this point to oversupply?

Well, if the only market that northeast Asia has to compete with is the market of last resort, and you then consider that producers are having to sell to buyers with lower credit ratings, and we haven’t even mentioned that buyers are dictating contract terms — shorter contract periods, increased gas indexation — then we can certainly say that LNG producers are working hard to ensure that there is as little oversupply as possible.