A substantial drop in Russian exports later this month will not give any support to European prompt prices, but will complicate data comparisons. Flows will fall when Nord Stream halts on 17-30 July, but Gazprom’s sales will not slow.

Gazprom has enough capacity to raise flows though Ukraine and withdraw from its European storage to maintain sales.

The firm uses its storage to ensure it can meet customer nominations and fulfil its long-term contract obligations during pipeline maintenance, rather than for trading storage spreads.

This results in supply at the hub remaining unchanged as other firms receive the same amount of gas from Gazprom whether Nord Stream is on or off.

Gazprom’s sales have remained similar during the month of Nord Stream maintenance — August in 2016 and September in 2017 — to other parts of the third quarter in recent years. But Russian exports have dropped as more has been supplied from storage. 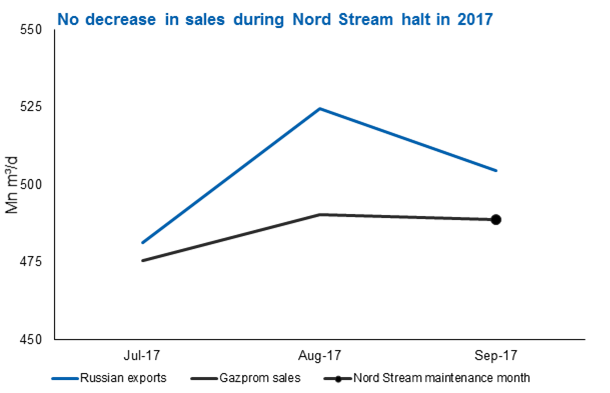 And there has been little change in TTF or Gaspool prompt prices during Nord Stream maintenance in previous years.

Prompt prices fell steadily through August 2015, with the pipeline halting in the middle of the month. 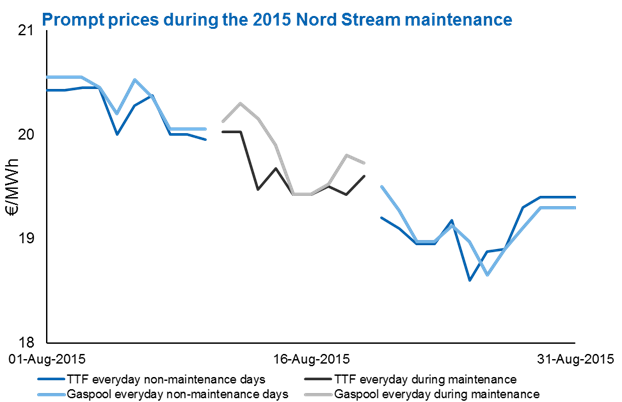 And there was a similar trend in August 2016, with the pipeline off slightly earlier in the month that year. 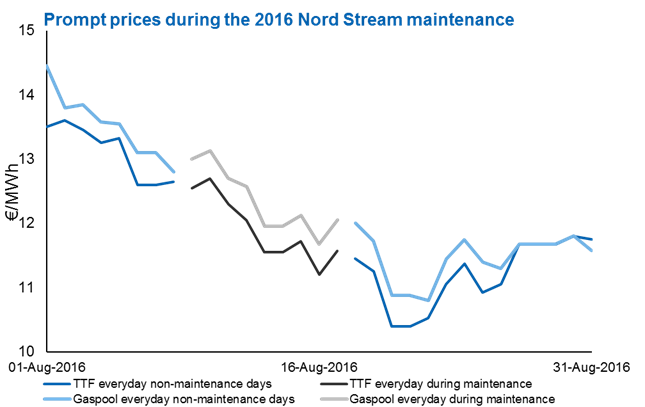 There would be a clear bump in prompt prices if the halt of a large piece of infrastructure was reducing supply.

Last year’s Nord Stream shutdown appears to provide some evidence of a rise in TTF and Gaspool everyday prices, which increased after it halted and fell when it restarted.

But this was driven by other factors, such as cool weather boosting heating demand. And TTF everyday prices were highest on 19 September, when a planned halt of Langeled curbed Norwegian exports to northwest Europe. 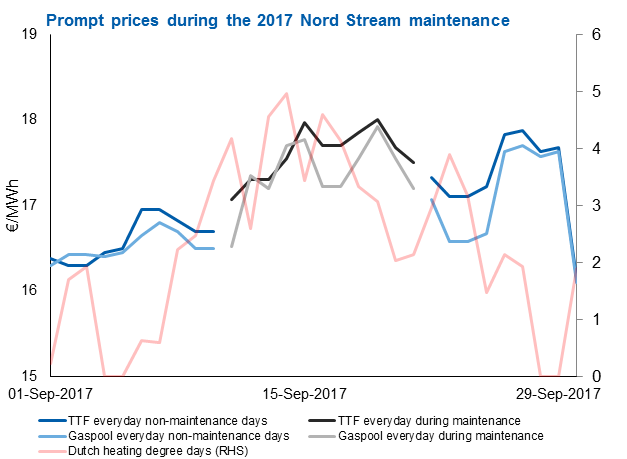 But Gazprom withdrawing from its storage capacity will result in a slower aggregate European stockbuild, despite other firms maintaining quick injections.

This will result in inventories appearing to be further below 2017 levels for the next couple of months, before catching up in September when the aggregate European stockbuild slowed during last year’s Nord Stream halt.

The key stock comparison for the third quarter will be inventories held by firms other than Gazprom as this will affect demand for supply at the hub. Gazprom can simply deliver more from Russia to itself in Europe to replenish its inventories when Nord Stream restarts.

But separating Gazprom’s stocks from aggregate European inventories is difficult. And the decrease in the aggregate stockbuild while Nord Stream is off could make injection demand later in the third quarter seem larger than it is if inventories lag behind previous years.