Riyadh may have decided the strategy of pursuing price, rather than market share, which served it well in the past, is now just too big a stretch.

High oil prices are what best ensured Aramco revenues over the last 15 years, but if elevated prices are now completely out of reach, why not reclaim sales surrendered to political rivals and market competitors instead?

Stating the obvious, the Saudi exchequer has fared best in recent years when crude prices have exceeded $95. While there is a notional linear relationship between crude exports and total revenues, the correlation is weak, so today’s Saudi policy of “laissez faire revisited” seems highly unlikely to swell the Kingdom’s budget.

That said, the last three years of supply management have seen anaemic revenues at prices struggling to exceed $60 paired with Saudi crude exports generally constrained at or below 7 mb/d. This is not an appetising combination either, and the prospect, even before coronavirus hit, that Riyadh and its GCC colleagues might have to swallow more of the same for another three years-plus must have tested resolve in the corridors of power. 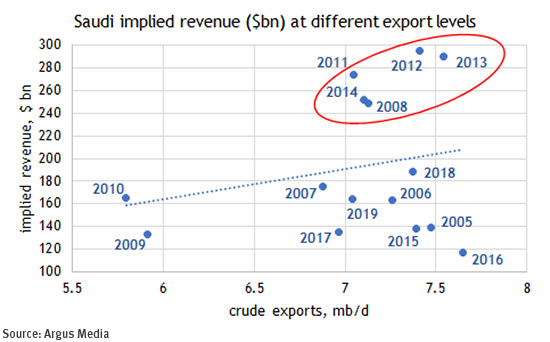 Nonetheless, the situation was deemed tolerable just so long as there was an illusion of burden-sharing (via Opec+, even if supply “management” was achieved more by involuntary outages than concerted action), and while prospects for a modest 2020 uptick in macro-economic and oil demand growth persisted.

Throw in the clear evidence that US shale sector consolidation was underway, and the framework was set for the (albeit temporary) production accord achieved last December in Vienna.

Fast-forward ten weeks and simmering impatience with output indiscipline boiled over on Riyadh’s side when the Russians said “niet” to deepening and extending production cuts beyond March and through end-2020.

Russian companies retain significant upstream investment plans, repeatedly pushed back during the Opec+ phase, and Rosneft and others are believed this time to have pushed back vigorously against either deeper or longer cuts.

Nor can Russia’s ever-shifting geopolitical goals towards the US, Saudi Arabia, Iran and the broader Middle East be overlooked in bringing us to where we are today.

With oil demand (at least temporarily) in free-fall due to coronavirus, and therefore market discipline unlikely to generate much bang for the buck, the alternative of chasing market share once more, as in 2015/2016, may have seemed the only remaining game in town.

Just as SARS is a poor predictor of the eventual outcome of COVID-19, so 2015/2016 is not necessarily the perfect game book for evaluating likely Saudi production policy moving ahead through 2020.

Notwithstanding, during the market share experiment last time, the maximum upward swing in Saudi exports was about 1.5 mb/d (from 7 mb/d to 8.5mb/d), and those higher export levels were generally short-lived.

Financial pain for producers saw the market share policy jettisoned before 2017. It’s possible however the Saudis may show greater resolve this time around because a) they now understand better the underlying resilience of shale, and b) they feel a greater sense of futility towards supply management (not least as Libyan, Venezuelan or Iranian barrels could partially return to the market).

There is talk now of April 2020 Saudi supply temporarily reaching 12.3 mb/d (partly from higher wellhead output, partly from storage) and of production capacity ultimately being raised to 13 mb/d.

If Riyadh has indeed decided to raise the stakes that far, few would doubt their resolve or technical ability to expand capacity, and potentially use it (not least if they also wish to dispel an impression the newly-floated Aramco is wholly subservient to Ministry production diktat). However, it will take time for such elevated supply levels to become sustainable.

Opec itself (never mind Opec+) now seems to be on life-support. If the Saudis see no other option than to strike out on their own, they may have to accept 2020 revenue streams much closer to the bottom right corner than the upper right of the chart above.

Even sustained 8.5 mb/d exports at $35 would strain planned budget and dividend aspirations. 2011-2014 might come to seem like a distant, golden age in comparison.

Podcast - Opec and US shale: the latest coronavirus casualties | Episode 3

Oil prices have posted their biggest drop in almost three decades towards $30/bl on expectations that an Opec-induced supply surge will exacerbate a global surplus, as demand growth collapses beyond Asia with the spread of the coronavirus to most major economies.

From the Economist's Chair

Nailing jelly to the wall…continuously: Uncertain times call for exceptional measures. That’s what confronts Opec+ producers as they meet on 5 and 6 March in Vienna.