Bunker price competition between the west Mediterranean and northwest Europe has heated up this year as large ports fight to protect market share owing to slow demand for marine fuels.

In response to this more competitive market — and as Argus receives an ever-increasing number of deals each day — Argus has launched new volume-weighted averages for both regions this month to capture increased liquidity and produce a single index, based on those trades, at each of the two most significant bunkering hubs in Europe.

The spread between the main grade of marine fuel sold at Amsterdam-Rotterdam-Antwerp (ARA) and Gibraltar-Algeciras-Ceuta (west Med) has narrowed further recently, having closed significantly in the past year and a half.

At the start of January 2020, when the new 0.5pc global sulphur cap in marine fuel came into force, 0.5pc sulphur fuel oil (VLSFO) was $115/t more expensive at west Med than ARA, but by the end of the year the premium at west Med had fallen to around $20/t. This month it has fallen below $10/t. 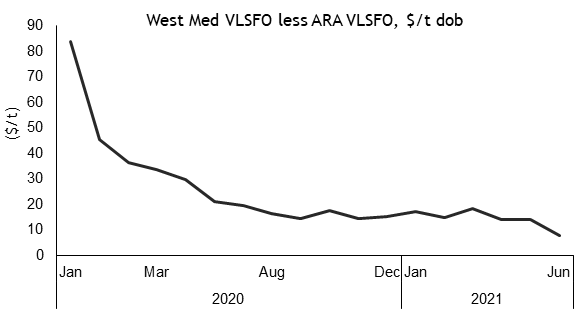 The west Med premium was particularly high in early 2020 as a result of VLSFO supply problems in the region at the time that the 0.5pc sulphur cap was introduced. But the subsequent easing of these difficulties kicked off the narrowing of west Med’s premium to ARA.

VLSFO is now the main grade sold at European ports, and it is for this grade — as well as marine gasoil (MGO) with 0.1pc sulphur — that Argus has introduced the new indexes at both locations. The bunker market often prices deals — spot and contract-based — on regional basket prices, such as on an ARA basis.

Larger ports have fared better than smaller rivals during the pandemic globally, as shown by the world’s two largest bunker destinations, Singapore and Rotterdam, increasing sales in pandemic-hit 2020 compared with a year earlier.

Continued low demand for marine fuel in Europe thanks to the effects of Covid-19 has helped shift volume towards the ARA bunkering hub.

This has continued into this year, with bigger ports such as Rotterdam boasting more security of supply, more suppliers and cheaper prices.

But the bigger picture of weak demand for marine fuels has forced rival ports such as Gibraltar in the Mediterranean to try and win back business by lowering prices as much as possible.

Supply of marine fuel is also ample in the west Med. Refiners have been selling VLSFO cargoes at lower prices to move product during a period of limited demand, including those which produce and sell their own product.
This has forced fellow suppliers in Gibraltar to reduce their prices to compete. Premiums have been weak or non-existent as a result.

Argus launched new index prices for VLSFO and MGO in ARA and the west Med on 7 June. We have received a steadily increasing number of deals over the past few months from market participants in both bunkering hubs, allowing us to better assess the liquidity in these bunker markets and rapidly understand the changing price dynamic between the west Med and ARA.

VLSFO deals reported to Argus have been over 30,000 t/month in the west Med so far this year — with the exception of April — and the monthly volume has twice exceeded 50,000t. 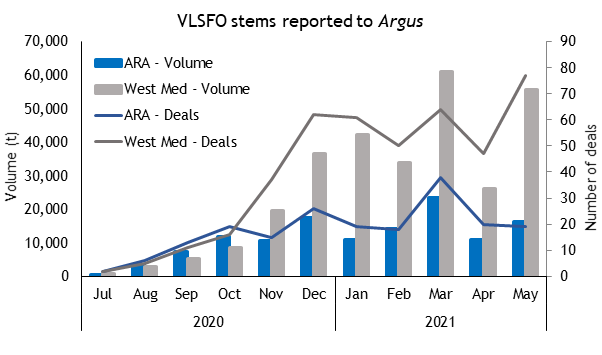 Taking March’s figure of just over 60,000t, and total Gibraltar sales of perhaps 330,000 t/month based on the port’s 2020 estimated sales of 4mn t, Argus can capture around a fifth of the market daily.

ARA’s spot market accounts for less than half of VLSFO prices, and hence deals reported to Argus are at a lower rate. But Argus has still regularly received several VLSFO deals a day in ARA, enough to accurately assess the spot market.

Decarbonisation in the bunker market

With the International Maritime Organization's (IMO) 2020 sulphur regulation changes now in the rear-view mirror, IMO 2030 represents the next major milestone in the bunker market. There are different ways that the market will meet these targets and the stricter ones ou...

Discussing the future of bunker fuels with car carrier UECC

As new car sales continue to struggle as a result of the COVID-19 pandemic, what has been the impact on car carrier UECC?

Low carbon fuels and state of the bunker industry

Tune in to learn about the progress of the IMO 2020 cap and the impact of Covid-19 from Adrian Tolson, Director, BLUE Insight, and IBIA board member