Global base oil prices have mostly extended their fall in response to persistent oversupply in most key markets like Europe and Asia-Pacific. Prices have continued to fall even as feedstock prices have surged. Base oil values relative to crude and diesel have slumped in response. But the drop in prices and margins has been from unusually high levels. Even at current, lower levels, these base oil values remained higher than usual.

Group I bright stock prices have fallen sharply in all the key markets. Prices have dropped in response to growing surplus supplies. Even after their correction, prices remained much higher than usual. Buyers have responded by holding back in anticipation of a further drop in prices. The move has exacerbated the rise in surplus supplies and slowdown in demand.

Indonesia had been a key source of additional bright stock supplies in Asia-Pacific in the first half of this year. The extra volumes had helped to cover for unusually tight availability in the region during this period. Indonesia’s exports of Group I base oils rose to more than 115,000t in the year to June 2021, up from 67,000t during the previous 12 months. A large portion of this volume was bright stock.

Its Group I base oil exports then fell back to less than 4,000t in July and August combined, as buyers increasingly held back in the face of rising regional supplies and lower prices. Other sources like Thailand faced a similar slowdown in demand.

Regional buyers have continued to hesitate on expectations that prices had further to fall even after their recent drop. The premium of fob Asia bright stock over fob Asia SN 500 prices has narrowed to less than $350/t following the drop in outright prices from around $450/t as recently as late August. But the premium remained well above average levels of $100/t in 2020. 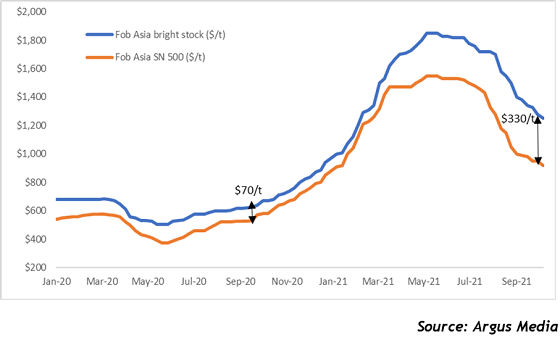 Outright Group I base oil prices in Europe have also fallen sharply in response to a rise in surplus supplies, combined with weaker demand. The trend has slashed the premium of Group I prices over feedstock and competing fuel prices. The sustained surge in crude prices, and even faster rise in diesel prices, has added to the pressure on Group I values.

The premium of fob Europe Group I SN 500 over diesel has fallen by more than $700/t in less than four months to its lowest level since January.

The fall in base oil premiums and persistent supply surplus have prompted a growing number of refiners to consider adjusting run rates in response.

But the SN 500 premium to diesel remained well above average levels of $30/t in 2019 and $170/t in 2020. The premium of bright stock prices over diesel has also remained much higher than typical levels. These still firm premiums have curbed any immediate moves by these refiners to adjust their production. 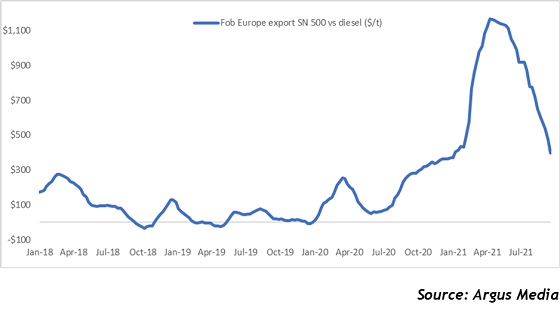 Prices have held firm even after the completion of a heavy and protracted round of Group III plant maintenance in Europe and Asia-Pacific. The maintenance began late last year and extended through to July. US imports of premium-grade base oils from sources like South Korea and the Mideast Gulf have risen steadily in recent months as production recovered.

Prices have held at elevated levels because supplies of most grades have remained tight and demand firm, even as output has recovered. The price strength points to increasingly tight structural fundamentals for Group III base oils. 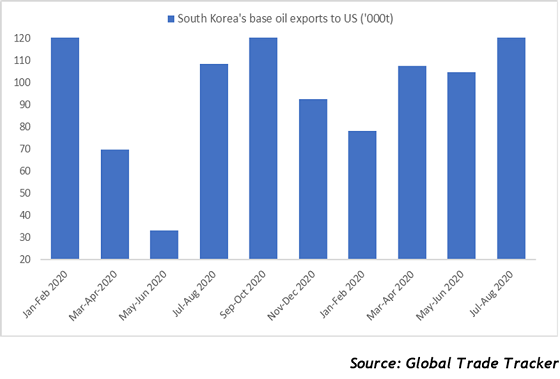 Global Group I base oil prices were mostly lower as supply improved and demand slowed. Prices have fallen sharply in the fob Baltic market especially. Prices have held firm in the US market. Prices for Group II and especially Group III base oils have also held firm beca...