Tanker scrapping has soared this year on depressed freight rates and elevated scrap prices, but will that trend continue? Argus spoke with Tamara Apostolou, the head of research for shipbroker Intermodal, about the many factors that could affect scrapping and the crude tanker market in the next year.


In the first eight months of 2021, shipowners sent 83 tankers for demolition amid depressed freight rates and elevated scrap prices. While Argus data shows tanker scrapping in August was down to 11 compared with 14 and 13 in July and June, respectively, the scrapping rate this year remains higher than the previous two years. In 2020, the monthly average was three tanker demolitions per month and in 2019, the monthly average was four.

Apostolou talked about whether ship demolition will continue to increase in 2022 and other factors at play in the crude tanker market.

Crude tanker demand has been lagging and rates have been at depressed levels – what are some indicators you are looking for that would signal the start of a recovery in the market?

Inventories have dropped globally below the five-year average range for this time of year, refinery maintenance is largely behind us, and China is possibly coming back to the market with some crude oil purchases for the fourth quarter. In addition to that, the fact that Opec+ has decided to extend the deal of 400,000 b/d production through October at least is somewhat relieving for the market.

In August this increase did not translate into an increase in exports because crude oil barrels were absorbed in domestic power generation, but in the coming months exports are likely to increase in tandem with increased crude oil production.

Overall, the fourth quarter looks like it has the potential for an inflection point because refinery utilization will increase, particularly for winter amid heating oil/diesel re-stocking. Gasoline inventories have also drawn down sufficiently in the west. Hurricane Ida in the US Gulf has been supportive to that end, with US inventories drawing down sharply as refineries have been idled.

You mentioned China, a top crude consumer. What other crude tanker routes or destinations do you think might become more- or less-common in the next year?

I believe that China will want to take advantage of the more competitive Middle Eastern grades at this point. A preliminary indicator is the fact that the Brent-Dubai spread has spiked again and that will likely continue to widen as Opec+ releases barrels. It is possible that China and Asia overall will absorb more Middle Eastern barrels, while the Atlantic will absorb more, lighter crudes from West Africa, the Mediterranean and the US.

On this note, Guyana emerging as a crude export origin is positive for absorbing Suezmax supply with India as a potential major destination of these extra barrels in the coming years, but for the time being the US Gulf coast continues to be the main source of demand for Suezmax tankers. Until Guyana ramps up production further than the current 120,000 b/d and the US crude oil supply and exports gain pace, it is likely that over the next months crude tankers in the Atlantic will lag in the recovery compared to the Middle East. 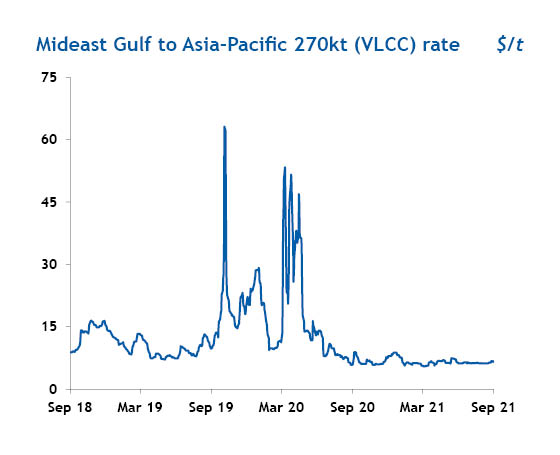 What are your expectations for tanker demolitions for the next year and as scrap prices start to lower?

Back in the first quarter of 2021 we were discussing that the release of floating storage would be key to whether the scrapping rate would increase or not, even though we were seeing preliminary indicators that scrap prices would continue to inflate, which they did over the next quarters to more than decade-high levels. We do have increased scrapping rates and I believe that year to date we are already above the two previous years of scrapping, combined, but still below the record high 2018 scrapping levels.

There are still VLCCs in floating storage, around 70 VLCCs, of which 20 to 25 are older than 20 years of age. If it was not for these vessels being tied to floating storage, scrapping would have already been higher given the elevated scrap prices, but it was also a matter of expectations about the market. Given that the previous year was a cashflow buffer for owners they did not opt for taking these vessels to scrap because they had the cash flow buffer of the previous year. Also, vintage units fetched a premium value-wise in the SnP market versus being scrapped. Once floating storage is released further by the end of the year, scrapping rates will likely increase.

Do you think scrapping could be higher next year?

It’s not a straightforward answer, it’s multifactorial. It will still depend on market conditions. It could be higher given the fact that owners also have to prepare for the new regulations for CO2 emissions reduction. We might see increased scrapping regardless of market conditions during 2022, as the Carbon Intensity Indicator (CII) requirements take place from 2023 onwards.
The delayed factor from 2021 might also play out in increased scrapping in that the floating storage will be released, and floating storage should have been released already because the crude oil curve is in backwardation. Backwardation doesn't justify the fact that you have around 8pc of the VLCC fleet being tied up still in floating storage; that also has to do with China, Venezuelan and Iranian barrels that are floating off Asian ports waiting to be released.

How do you see the shipping industry adapting to various greenhouse gas emissions (GHG) regulations coming into effect?

There are several steps in meeting the GHG emissions. The intermediate step that was recently adopted by the MEPC 76 (Marine Environment Protection Committee) was an 11pc decline of CO2 emissions intensity by 2026 compared to 2019 levels, and that would be an intermediate step to be reviewed for whether it has been achieved or not in 2026 and then to take additional steps — possibly stricter — for the 2030 CO2 emissions per transport work reduction target of 40pc compared to 2008 levels. Then there is the 50pc GHG emissions reduction target by 2050 compared to 2008.

Owners will be taking steps and I believe they are already doing it. There are several options: short term, medium term, long term. One that is being discussed extensively for the short term is the engine power limitation option so that vessels’ speeds are contained and fuel consumption and emissions are too as a result.

Looking at the dry bulk market, in particular, high freight rates have incentivized an increase in speeds. And if we are indeed entering a commodity supercycle, at least for dry bulk, or an extended upward cycle for the next two years, the optimal speed that maximizes the time charter equivalent, at least for dry bulk, is likely to be higher than what the engine power limitation indicates. That is not the case for tankers at this point because low earnings have not incentivized an increase in speeds. But if the market recovers, they might also be incentivized to increase speeds in the next year.
Other medium- and long-term measures that shipowners are already looking into adopting include energy-efficient technologies (e.g. gated rudders, rotors), conversions of engines to burn LNG/ammonia, the use of biofuels etc.

How will ballast water treatment system requirements continue to affect the tanker market?

I think the way the adoption develops fleet-wide, vessels with ballast water treatment will become a benchmark. So far these vessels have been enjoying a premium, value-wise. Tankers with ballast water treatment will be the new benchmark so the premium we now see in values will be incorporated into the benchmark value which will be higher. I believe this is a process that will be finalized in the next year or two, value-wise, ahead of the September 2024 compliance date that IMO has set. Obviously, in the meantime, lackluster tanker earnings are hindering the ballast water treatment installation which will have to accelerate in the next two years and might be another factor for increased scrapping activity given that 7.5pc of the tankers fleet is older than 20 years of age.

What are you seeing on the new building front?

We have been seeing the paradox of having a lackluster market and increased contracting rates (year-to-date crude tankers ordered are double the same period last year) and one of the reasons is that the fleet has to be renewed with energy-efficient vessels. We are seeing particularly dual-fueled tanker orders gaining pace, on VLCCs in particular. Therefore, we also saw newbuilding prices increasing substantially along with the steel price inflationary pressures despite depressed market conditions.

In terms of the percentage of orderbook in the tanker fleet, we haven't seen a dramatic rise, so we're still close to record low levels. It's not at record low levels, but close, we're at very low levels at approximately 8pc of the fleet. The increasing contracting trend might continue, especially if the market recovers and given the new regulations that the fleet needs to be upgraded to energy-efficient technologies.

For the time being, this increase in new orders — it’s not expected to be a negative for fleet growth. The way the order book stands, the next two years are projected to experience declining tanker fleet growth at least in 2022. In 2024 we will certainly see fleet growth increasing if this pace of contracting continues.

Some tanker companies said they expect a better tanker market later this year, some analysts believe it will happen in 2022. What are your expectations on a recovery timeline and why?

I believe 2022 is more likely to see a meaningful market improvement for crude tankers with crude oil supply growth expected to be higher than demand (depending of course on the pace that Opec will release production), but the fourth quarter of this year is likely to already see a gradual recovery. Seasonality during the fourth quarter is at its peak for the tanker market and all the conditions are there for seasonality to work into recovery, as refineries utilization increases and crude oil inventories are low.

As a last comment, despite depressed market conditions for tankers, we have seen asset values rising since the beginning of the year with older vessels values rising at a faster pace. Other than the inflationary pressures on steel prices that have been largely responsible for this trend, expectations for a market recovery later in the year have translated into a countercyclical investment in the sector, with the potential for further value upside if a market recovery indeed takes place by the end of the year.