The impact on tanker rates was both instant and spectacular, with record-high bunker fuel prices adding to the problems for shipowners to deal with in the weeks after the conflict began.

And the effect on global crude and products trade flows took longer to arrive but is now becoming noticeable. Here we illustrate the effect in five graphs.

1. The Weight of Freight for Russian crudes skyrocketed

Unsurprisingly, Russian-loading rates were most affected by the conflict. Uncertainty about what sanctions the EU, the UK and the US might place upon Russian crude, or Russian-linked companies, led shipowners to demand sharp premiums to load from Baltic and Black Sea Russian ports. Some shippers preferred to avoid Russian loadings altogether.

The result was a significant increase in the Weight of Freight — the freight cost as a percentage of the delivered price — for Russian crudes compared with non-Russian barrels. 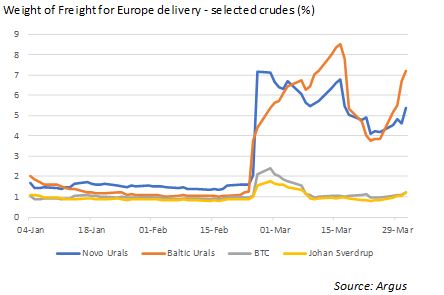 The premium for Russian loadings has been volatile, with freight rates regularly moving by more than WS50 in a single trading session. Rates decreased from their initial high point as more willing shipowners positioned vessels to load in Russia. But rates in the Baltic, where ice restrictions were an added complication in March, have picked back up in the past week, which means a two-tier market is still very much in evidence.

The true impact for Black Sea shippers is even greater, as insurance companies are requesting an additional war risk premium for vessels sailing to the area, the costs of which can be significant and are additional to the reported freight rates from the region. Demurrage rates also spiked, reaching a post-conflict peak of well over $100,000/d in March, which would amplify the cost of any delays. 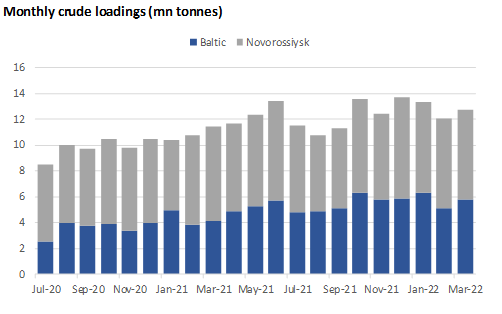 Up to now, there has been no significant slowdown in loadings of crude (mainly Russian Urals and majority-Kazakh CPC Blend) from the Baltic region, or from terminals in and around Novorossiysk.

A short halt in loadings from the CPC terminal, followed by an ongoing capacity reduction with two of three single-point moorings currently undergoing repairs for storm damage, has been the largest disruption to supplies from the two regions.

3. But trade flows have started to shift

European buyers have been wary of Russian crude since the conflict began, with several announcing that they would no longer buy Russian supplies on a spot basis. This wariness appears to have extended to CPC Blend, despite its majority-Kazakh origin, suggesting that European buyers were cautious about any oil loading at Russian ports, such as the CPC terminal at Novorossiysk.

This resulted in heavy discounts for Urals and CPC crude to the Atlantic basin benchmark North Sea Dated. These discounts helped to offset unfavourable arbitrage economics for other North Sea Dated-linked crudes heading east of the Suez Canal and encouraged more Asia-Pacific and Indian buyers to purchase supplies. The average distance travelled by crude exports from the Black Sea picked up sharply in March as a result. 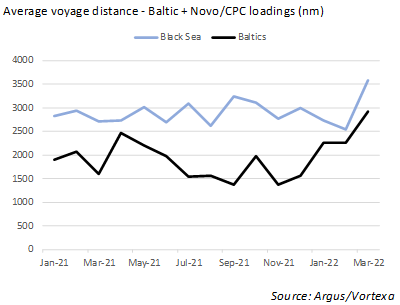 The average distance of Baltic loadings also increased, although in this case the cause was increasing focus on the Mediterranean market as regional demand has dried up. Baltic sellers have seen a dramatic collapse in demand for Urals crude from staple local customers, with Finland’s Neste, Sweden’s Preem and Poland’s PKN Orlen all announcing their intention to step back from purchases of Russian crude over the past few weeks.

Longer voyages support tanker demand, for Suezmaxes in the case of Black Sea-Asia voyages and for Aframaxes on Baltic-Mediterranean trips. Rates for both vessel classes in and around Europe have firmed in the past week.

4. Europe is changing its crude diet

One expected consequence of European wariness about Russian crudes is that it will have to look further afield for its import requirements.

Up to now, loading data does not reflect any increase in the distances that crude is travelling towards Europe: 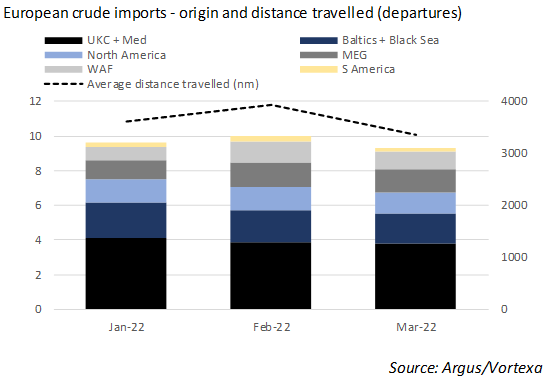 But evidence from the freight market is that such a shift is coming. Demand for Americas-Europe crude shipments, currently for April loading, is extremely high, which is already beginning to show in freight rates on that route. Aframaxes are the main vessel used for transatlantic trade, and the US Gulf coast-Europe Aframax rate crossed $40/t for the first time since spring 2020 on 31 March. High rates are also drawing tonnage away from other regions, with 11 Aframaxes in ballast westwards across the Atlantic at the time of writing on 1 April.

Strong demand has also knocked on to other vessel classes. At least five Suezmaxes and a very large crude carrier were booked for transatlantic voyages out of the US Gulf coast and Latin America on 30 March alone. This has tightened Atlantic vessel availability, which in conjunction with high bunker prices is making it less attractive for owners of large tankers to undertake the long ballast leg to the Atlantic from east Asia, unless they have a guaranteed cargo upon arrival.

Up to this point, the EU has shown no appetite for full-scale sanctions against Russian crude. But many European companies have voluntarily decided against buying incremental supplies (so-called ‘self-sanctioning’). Argus Consulting estimates this spot trade at around 1.7mn b/d of waterborne exports.

There are several options to replace this volume, were it to be lost to the global market. The most obvious short term solution, the coordinated release of strategic global stocks, would likely have a negative impact on dirty tanker demand and rates if stocks are released close to demand centres.

But there are scenarios that could buoy tonne miles, such as an increase in Mideast Gulf supply, if it led to Europe buying more Mideast Gulf crude in place of Russian barrels and therefore importing over longer distances. So far there has been little sign of a big increase in production, with the Opec+ group deciding against upping its production much beyond its original schedule in May, and still no agreement in talks to end Iranian sanctions.

There is also the question of what the actual shortfall of Russian exports might be. Urals exports have continued apace up to now, and the loading programme for April at 2.3mn b/d would mean them flowing at their highest level since before Covid struck in 2020. Heavy discounts in excess of $30/bl make Urals crude highly attractive to non-European buyers. And, theoretically, a restructuring of crude trade flows – essentially making them less efficient with crude travelling longer distances – would support dirty tanker rates.

In a scenario where 1.7mn b/d of Baltic and Black Sea-loading crude were diverted away from Europe and towards Asia-Pacific, with the same amount of west African and Americas crude heading to Europe instead of Asia, the tonne mile impact would be significant. 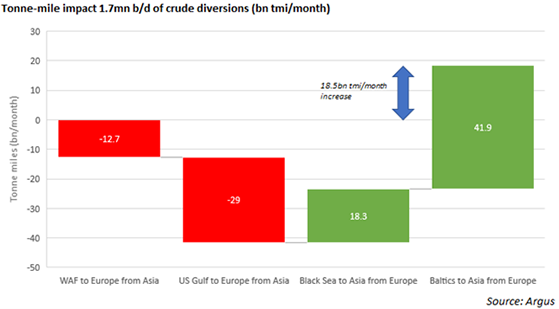 Based on 0.85mn b/d diverted from each origin. Singapore as Asia destination, Augusta/Rotterdam as Europe destinations. Cape of Good Hope routing for US Gulf Coast, West Africa and Baltics to Asia, Suez Canal routing for Black Sea to Asia

But even a gain of 18.5bn tonne miles/month would be insufficient even to bring total dirty tanker demand back to pre-Covid levels. Total global dirty tanker tonne miles averaged around 817bn/month in the first quarter, Vortexa data show, down from an average of over 900bn/month in the first quarter of 2020.
Volatility is likely in the coming months, with unusual pockets of demand such as the current state of affairs from the Americas and west Africa creating spikes in rates. A sharp rise in Suezmax rates in the Mediterranean on 4 April were an illustration of this. And rates for Russian loadings are also likely to remain at a premium, as long as concerns about security and sanctions dissuade shipowners from partaking in Russian business.
But overall any lift in tonne mile demand does not appear likely in isolation to wipe out the current situation of oversupply in the global market. This is even before considering the potential negative effect that a higher price environment may have on demand.

Weight of Freight: Can oil markets withstand the loss of ESPO crude?

Russian crude grades, including ESPO, are being avoided in the oil market. What impact will it have on crude flows as tanker rates in Asia hit 2-year highs?