Commodity markets presently hold a distinctly Janus-like countenance, with supply-driven tightness likely to become gradually offset by associated inflationary pressures affecting the world economy. ICE Brent remains comfortably supported above $110 per barrel after another Opec+ production rollover last week and signs that EU Foreign Ministers could shortly agree a package of measures designed to eradicate imports of Russian oil into the bloc by the end of 2022. Parallel proposals banning EU service providers and insurers from any business related to Russian oil, if enacted, could further re-enforce Argus Consulting’s existing forecast of a market increasingly short on Russian crude and products by end-2022.

Although commodity prices generally have eased after an immediate post-invasion spike, they nonetheless remain 20% to 50% stronger than pre-crisis levels. For as long as conflict in Ukraine continues to threaten Russia/Ukraine commodity export flows, and lockdowns in China persist in causing logjams for upwards of 20% of the world’s container vessel fleet, there is scant likelihood of supply pressures easing anytime soon.

Market rebalancing is therefore more likely to be driven by the demand-side, as price inflation chokes off industrial investment and eats into consumer spending that might otherwise have been buoyed by surplus savings accumulated during the pandemic. While recent oil market focus has understandably centred on EU sanctions proposals and the Opec+ production rollover, financial markets have been digesting a markedly more hawkish shift from Atlantic Basin central banks on the one hand, and the warning signs implied by imminent policy easing in China on the other. Meanwhile, April manufacturing and services PMI data showed a global economy that is continuing to slow alarmingly after its initial post-pandemic rebound.

Inflation expectations have ratcheted steadily higher over the last nine months, undermining the rationale for the loose monetary policies in place for more than a decade. Inflation-prone emerging market central banks have been tightening policy for months to control accumulating inflationary pressures. Unsurprisingly, some have struggled to achieve a balance between policy rectitude and sustaining post-pandemic recovery. Their job has been complicated by a long-anticipated monetary tightening from the US Federal Reserve, which last week added 50 basis points to lending rates for the first time in 20 years, with forecasters envisaging US policy rates in a 2.5% to 3% range during 2023. The erstwhile narrative on “transient” inflationary pressures seems now well and truly buried, and the USD index has moved steadily higher, reaching near 20-year highs. 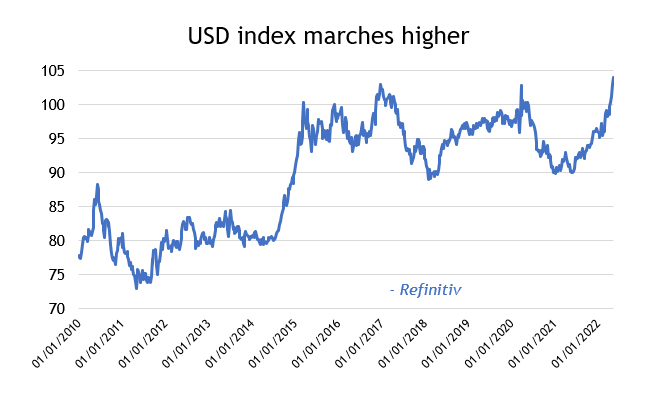 China’s government faces rather different issues and is preparing monetary and fiscal stimulus to prop up rapidly slowing activity. Here too, a recent 5% plunge in the value of the RMB vs. the USD is raising commodity import costs, meaning that overall import volumes in the short term may struggle to better the 8% y-o-y decline seen during January-to-April 2022. Beijing’s “dynamic zero-Covid” policy is now likely to run well into the second quarter, leading some forecasters to trim 2022 expectations for GDP growth down from a +5.5% government target and closer to +4%.

Until now continental European policy makers have been keen to cushion their economies on the basis that labour market conditions differ with those of their US and UK counterparts. That too has seen the euro weaken sharply against the US dollar, only exacerbating inflationary pressures for European commodity importers. However, as March producer price inflation for the Eurozone hit an eye-watering +37% year-on-year, so policy-maker statements have begun to lay the groundwork for the ECB to join its more hawkish Anglo-Saxon counterparts, with an initial 25bp rate hike now seen possible in July. As with other central banks, the ECB will walk a tightrope in attempts to tame price rises without pushing the European economy, already nearing a cyclical peak, back into recession.

On a global basis, as inflationary pressures build and US dollar import costs continue to rise, the solution to high commodity prices may indeed ultimately prove to be those high prices themselves.

The Russia-Ukraine crisis is above all a humanitarian tragedy but has also augmented commodity price inflation as the world comes to terms with actual and threatened supply disruptions. Markets, as always, will adjust via shifts in pricing and arbitrage. However, focus ...

From the Economist's Chair: Ukraine crisis to weigh on 2022 recovery

The outbreak of conflict in Ukraine last week saw a short-lived surge in commodity prices, extensive sanctions imposed on Russia, and a flight towards safe havens. Although commodity markets eased on Friday (“buy the rumour, sell the fact”), and energy exports are prese...