Canada has become a leading supplier of heavy crude to the US Gulf coast, despite transport bottlenecks. The two most commonly traded Canadian heavy crude grades at the US Gulf coast, Western Canadian Select and Cold Lake, are similar in quality and typically trade within a 5¢/bl range of each other in the high-complexity refining centres of east Texas. Argus has responded to the industry’s growing need for a single price index by pooling trades for both grades to produce the Argus WCS Houston and Cushing price assessments.

Argus WCS Houston – The pipeline and terminal infrastructure in the Houston-Nederland-Beaumont area in Texas supports a price assessment that pools trades done at multiple terminals. This is because many pipeline tariffs allow for moving heavy Canadian crude to and from the major hubs at little or no cost. Accordingly, Argus pools spot trades for WCS and Cold Lake done at Enterprise’s ECHO, Sunoco’s (Energy Transfer Partners) Nederland and Phillips 66’s Beaumont terminals in a daily volume-weighted average to produce the Argus WCS Houston assessment.

It is also important to note that for months at a time, much of the WCS crude sold at the Gulf coast may be sold through term contracts. Since Argus assessments reflect only spot deals for delivery in the next month, the trade covered by these deals is not available to be included in the Argus WCS Houston assessment. That is why including the liquid spot trade of similar-quality Cold Lake at Houston-area terminals is so valuable to ensuring that the Argus WCS Houston assessment is based on robust physical spot trade every month.


WCS Hardisty – The WCS blended stream is created in tanks at Hardisty and actively traded there. Argus began assessing spot trade of WCS at Hardisty in 2006.

Another benefit of an actively traded and transparent price for WCS at Houston is that it allows Argus to give a daily snapshot of the arbitrage between western Canada, Cushing and Houston (see graph below). These price spreads effectively communicate the strength of crude demand at each location, and help buyers and sellers determine where and when to trade. 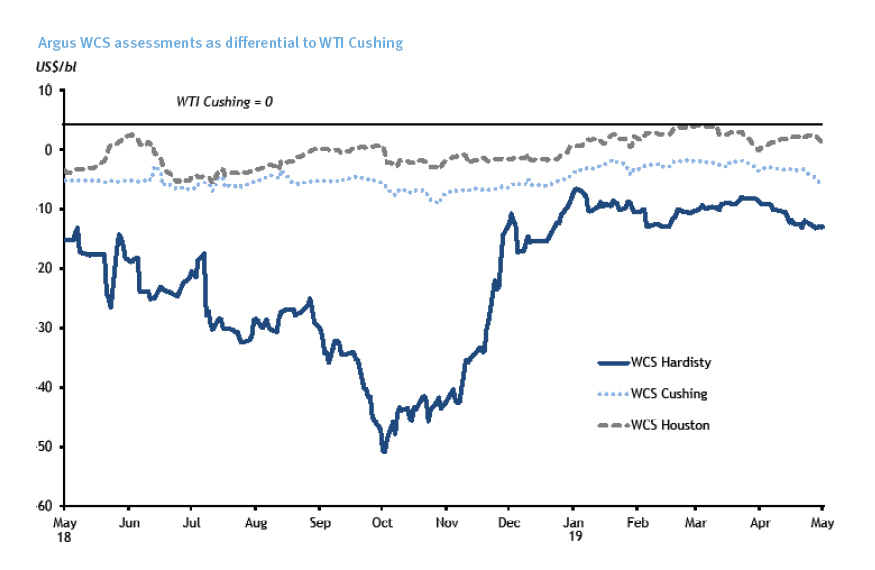 Anyone with exposure to heavy crude being shipped through or arriving at the US Gulf coast will find the Argus WCS price assessments beneficial. WCS Houston is also the only hedgeable heavy crude price in the US Gulf coast market, as Chicago-based exchange CME plans to launch a financial contract settled against the Argus WCS Houston physical assessment.

Our prices are used extensively by energy companies, governments, banks, regulators and other organisations as benchmarks for derivatives and as indexes in physical contracts. Learn how our price data and products can enable your business.
Find out more