China is buying less because of softer prices for granulated sulphur, as well as stricter environmental regulations on crushed-lump imports. Major sellers in Iran and Turkmenistan are struggling to export their crushed-lump cargoes because of lower pricing alongside trade sanctions on vessels loading from Iran.

Crushed lump trades will probably continue to dwindle from the global sulphur spot market if these obstacles remain.

Until 2019, Iran and Turkmenistan dominated the crushed lump spot supply market, with both countries exporting at least 77-89pc of all spot crushed lump cargoes in 2017-18, Argus data show

China remained the number one buyer. Argus data show China secured at least 60pc of all crushed lumps sold in 2018, at 321,000t.

The second largest buying market for crushed-lumps was north Africa, supported by demand from Moroccan fertilizer producer OCP, as well as from smaller buyers in Tunisia and Egypt.

But unlike China, OCP prefers to secure its crushed lump cargoes on a quarterly contract basis, rather than a spot basis, and predominantly secures them from suppliers in Saudi Arabia and Russia.

China’s environment ministry banned several ports from discharging crushed lumps in mid-2018 and placed restrictions on buyers processing it on an industrial scale. This was done to limit pollution from dust, caused by storing or processing sulphur in crushed lump form in large quantities.

Alongside this, the US re-imposed trade sanctions on Iran in November 2018, which caused — among other things — freight rates to increase for Iranian sulphur exports, as wary vessel owners applied premiums for chartering from Iran.

No spot sales of Iranian or Turkish loading crushed-lump sulphur have been confirmed so far in 2020. 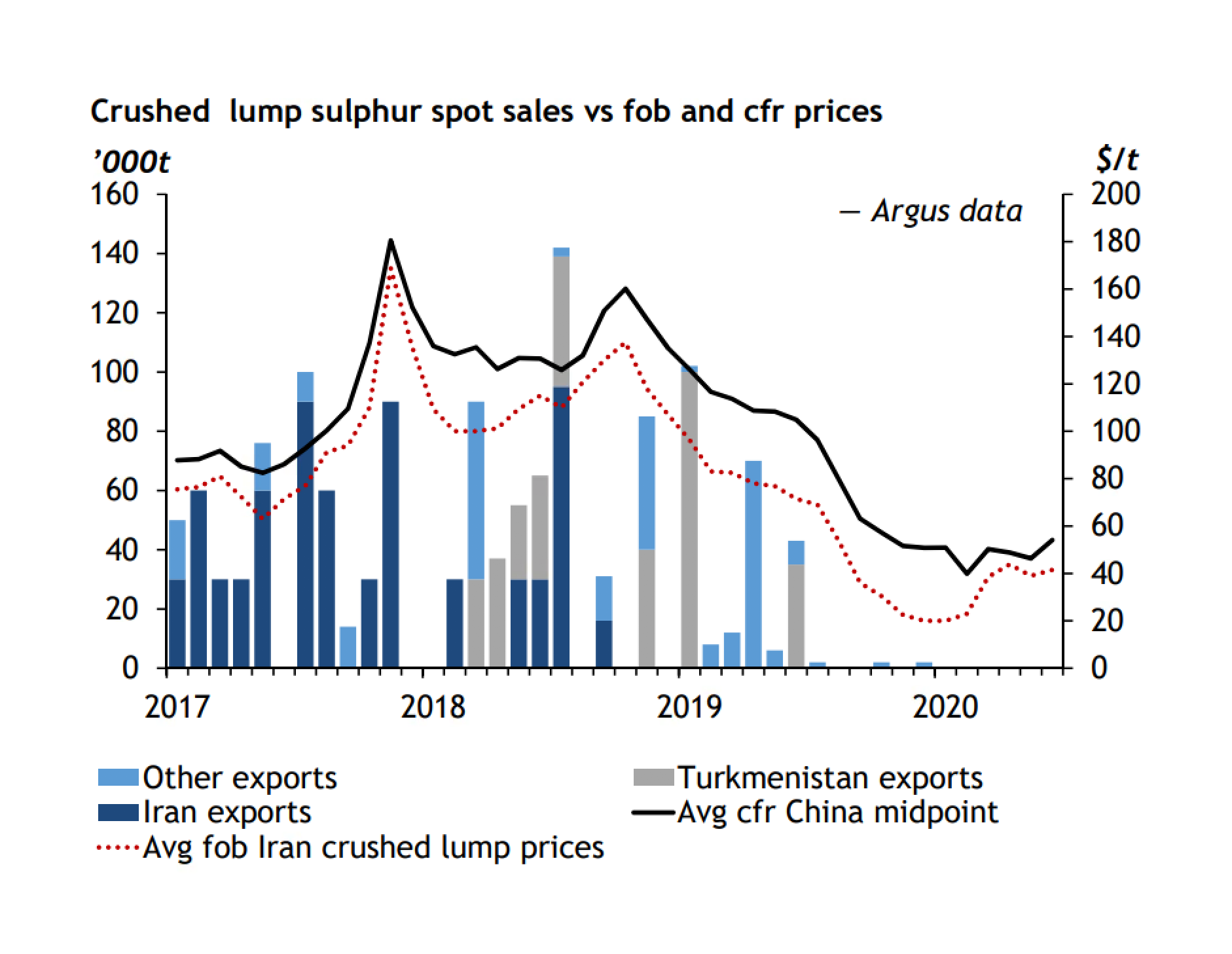 2020 crushed lump sulphur trade and beyond

And  Covid-19 is putting more pressure on freight rates  from Iran, as the pandemic further discourages vessel owners from chartering vessels loading from the country.

Some support for crushed lump trade will remain through Morocco’s OCP, but the company’s demand is largely being met by existing contract arrangements with Saudi Arabian and Russian crushed lump suppliers. And overall demand is falling steadily from the expansion of OCP’s Jorf phosphates hub, which only processes granulated sulphur.

This means Iran or Turkmen-origin spot cargoes are unlikely to re-enter the global market in significant quantities, particularly given pressures from prices, sanctions, and now the Covid-19 pandemic.