Firms have been grappling with how to price long-term contracts, at a time when spot values have diverged sharply from the indexation formulas presently in use (see graph). 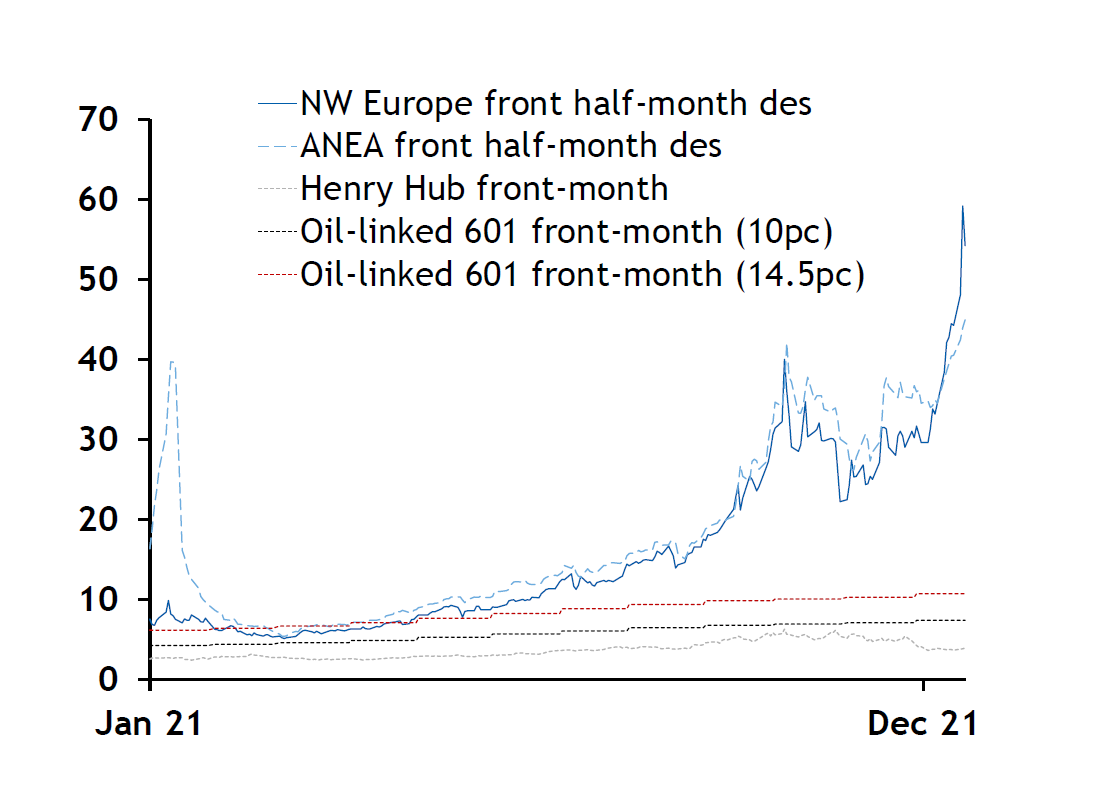 The case for a US-based global LNG price index — such as the Argus Gulf Coast (AGC) fob price — has become more compelling, given how the market has evolved. In 2020, the way the market reacted to Covid-19 highlighted the global balancing role that the US is playing. This year, with Australia and Qatar increasingly acting as ‘base-load’ suppliers for Asian markets and production problems keeping west African suppliers off the spot market, US flows and prices have acted as a barometer of the global balance.

Industry participants have long considered the emergence of new price indexes for US LNG and freight as necessary steps for the LNG market to achieve maturity, but previous attempts to develop a paper market based on these failed to gain traction. The renewed interest in long-term contracts, at a time when traditional formulas have proved obsolete, offers scope for a rethink.

Oil parity seen from above

Long-term LNG contracts have historically been priced against crude, with Brent-indexed formulas still accounting for the vast majority of term sales. Brent slopes used in long-term LNG contracts have typically ranged at 10-14.5pc — below the so-called ‘oil-parity’ level of 17.2pc that was previously considered a ceiling for LNG prices — based on the assumption that above that level, utilities would rather switch to burning fuel oil to generate electricity.

That ceiling has been repeatedly smashed, and the assumption called into question. In January 2021, LNG prices briefly spiked to over 70pc of Brent, before falling back below oil parity by mid-February. They then rose again above oil parity in June and have since remained consistently above that level, but there are few signs of a substantial demand response (see graph). 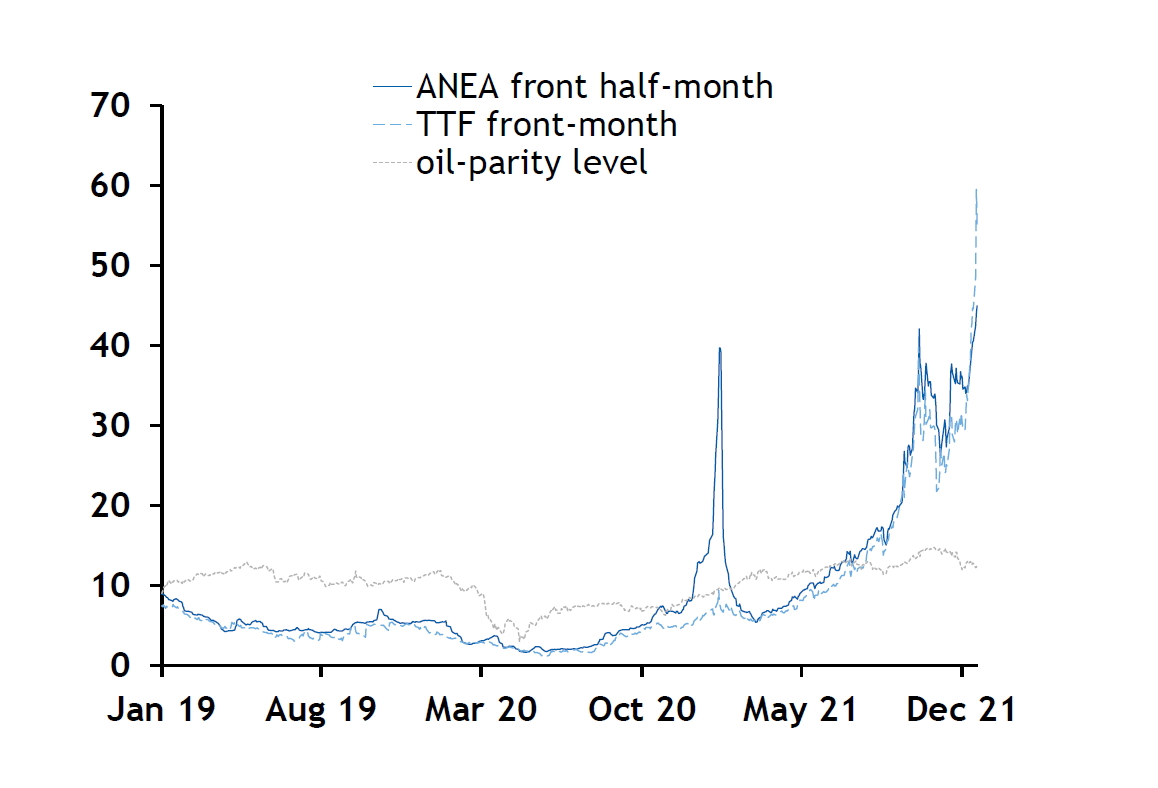 What Brent slope can firms agree on, then, if LNG has broken loose from oil? Environmental concerns would still justify a slope below oil parity, as this structurally favours less polluting fuels ahead of dirtier ones. But as the decarbonisation drive gathers pace, boosting demand for lower-carbon fuels, it is unclear whether gas still needs a price incentive against oil. The direct competitor is coal, rather than oil — but with no link between the two production cycles, it might be difficult to envisage a coal-linked price.

And as oil gradually disappears from residential heating and power generation, there is less competition between the two fuels, and less connection between the two prices — exacerbated by the lengthy price formation periods (up to nine months) that are traditionally used in indexation formulas.

The result is almost no relation between the price paid and market fundamentals, and no surprise that there has been an endless list of renegotiations — often ending in arbitration —in recent years. Now the table has turned, and oil-linked contracts are far lower-priced than spot values, producers that are missing out on huge opportunities in the spot market are heard defaulting on cargoes — as potential profits are much larger than penalties — or deferring contractual deliveries, threatening security of supply.

The rise and fall of Henry Hub

The US’ rise to the rank of the world’s largest LNG producer — nearly 90mn t/yr at present — has already changed the market, with its flexible contract terms and the first gas-to-gas indexation used at scale in LNG contracts.

And yet, Henry Hub-linked formulas are still based on a price that is largely disconnected from the global LNG market. Despite the sheer size of US liquefaction capacity, it still accounts for only a small proportion of the US gas market — the 9.67bn ft³/d of gas fed to liquefaction facilities in January-November equates to just under 10pc of dry gas production in the US’ 48 lower states, according to the US’ Energy Information Administration.

This leaves firms exposed to price risks. Most firms that had signed up for US offtake had been losing money for years, only securing profits if they were reselling those volumes under oil-linked deals. The costliest projects —such as the 15mn t/yr Corpus Christi facility in Texas — only started being profitable from the start of 2021, nearly two years after commissioning. (see graph) 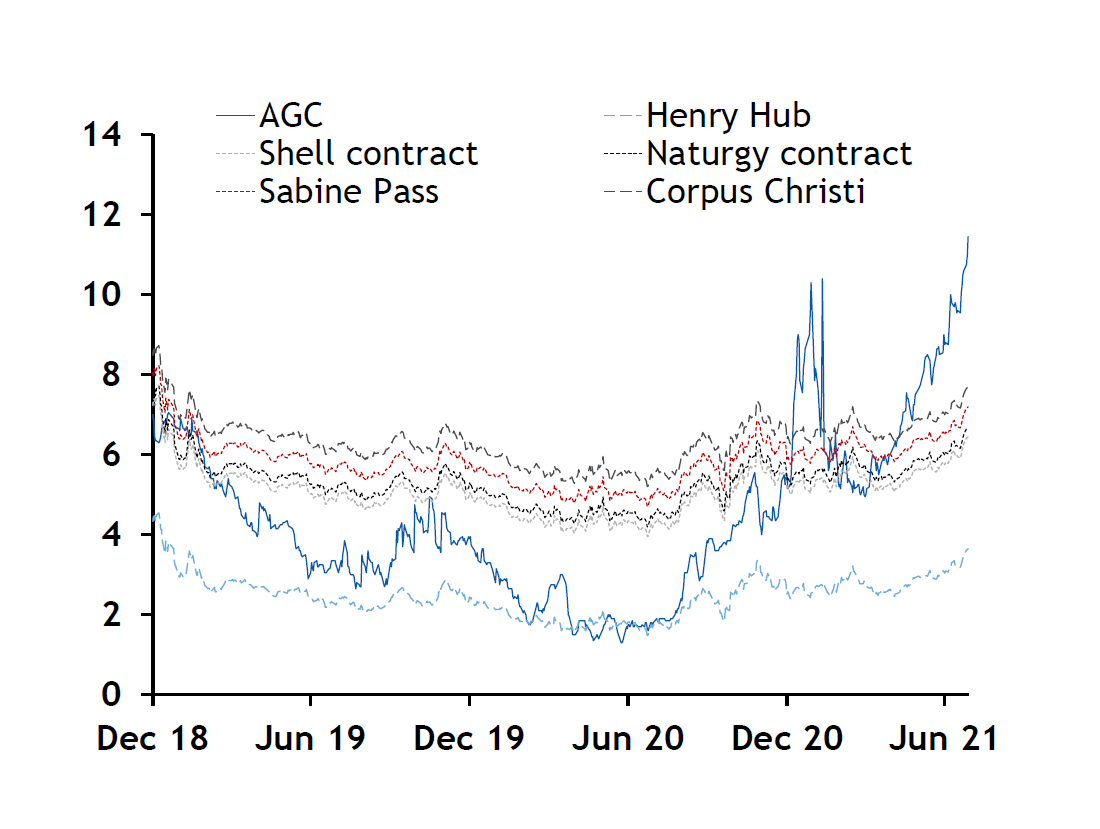 In search of a pure LNG index

In truth, the likes of Tellurian might themselves have little appetite to sign up for a fixed liquefaction fee, when the gap between spot prices and feedgas costs is perhaps 10 times wider. In its recent deals, the firm has instead opted for a mechanism that sets fob prices at a netback to either the Dutch TTF gas hub or the Platts Japan Korea Marker (JKM) index, which represents spot LNG prices for delivery to northeast Asia.

Both options have their flaws. The JKM is “performing a function” in the market, Shell executive vice-president Steve Hill said at a recent event, “but when you are looking at an index where 50pc of the cargoes are being brought by one trading house [and] 30pc by another trading house, […] it’s not obvious that that function is actually representing the price Asian importers should be buying at”. Hill’s comment echoed the concerns of many market participants, who have repeatedly flagged the large influence a handful of firms have on JKM price formation.

Regarding the TTF, Hill said it is “quite attractive at the moment”, but wondered whether there is “any reason why the Asian LNG industry indexes itself to European weather or Russian gas pipeline flows?”. The Dutch hub is more linked to LNG fundamentals than the Henry Hub is, but it reacts to a much wider range of variables that have little to do with LNG. European LNG prices have been linked to the TTF in recent years, but still swing — quite rapidly at times, as in recent weeks — from ample discounts to sizeable premiums and vice versa, as LNG fundamentals do not necessarily chime with purely European ones (see graph). 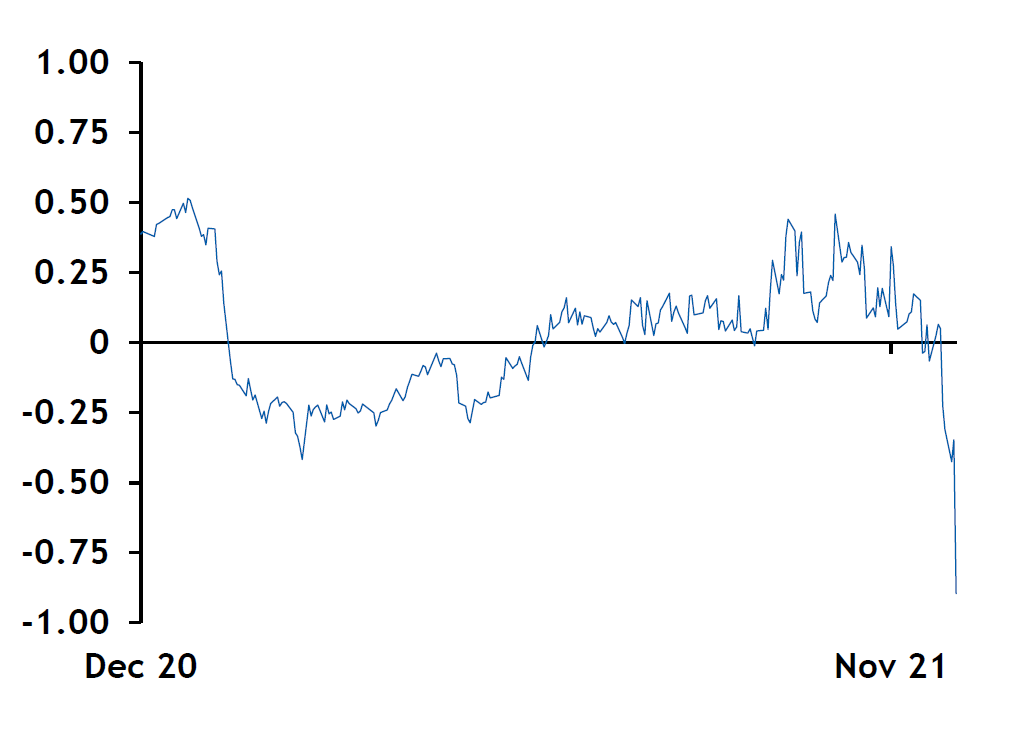 There is also the element of freight creating additional risk. Tonnage demand can swing sharply, depending on how far vessels need to travel to deliver cargoes, and frequent changes in the supply and demand balance between the Atlantic and Asia-Pacific basins have triggered stronger volatility in the LNG freight market in recent months. (see graph) 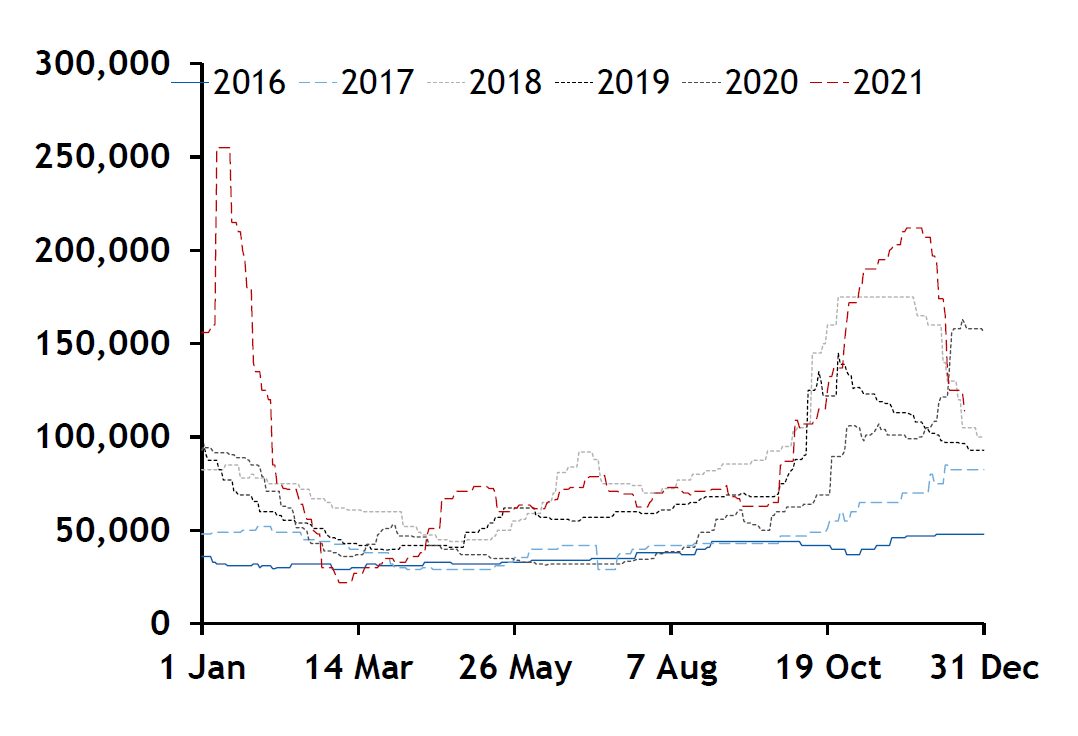 Tellurian’s attempt to combine very different hedging tools into a single mechanism is effectively a proxy for price indexes that already exist, but have so far failed to establish themselves as an accepted global LNG reference. It might be time to reconsider.

Reach out to us to find out more about our LNG market reporting and consulting services.

Market Talks: Natural gas reinjection in Brazil and the regulator setting eyes on the topic

Brazil harnesses only a little above half of its natural gas production, due to high rates of gas reinjection. The issue is controversial, divides producers and consumers, and became an attention point to oil and gas regulator ANP.