Europe's natural gas market is showing many parallels with the 2012-13 winter, and there are questions of where northwest Europe's flexibility would come from in a cold winter similar to that of a few years ago.

This blog on storage addresses the tight seasonal spreads analysed in the Argus European Natural Gas quarterly webinar in January. The live webinars — including recording and brief document — are usually only available to subscribers, but to complement this blog the January one is available here.

The cold spell forecast to hit Europe has sent prices for delivery over the rest of the winter soaring, especially with storage stocks in some countries heavily depleted.

Prompt prices spiking ahead of the “beast from the east” plunge in temperatures has provided an opportunity for capacity holders to cash in, particularly at UK mid-range sites that can respond quickly to volatility.

But forward storage spreads have tightened, despite prompt price volatility demonstrating the value of seasonal and short-term flexibility. The support for the summer 2018 market has been driven by expectations for strong injection demand once the heating season ends. 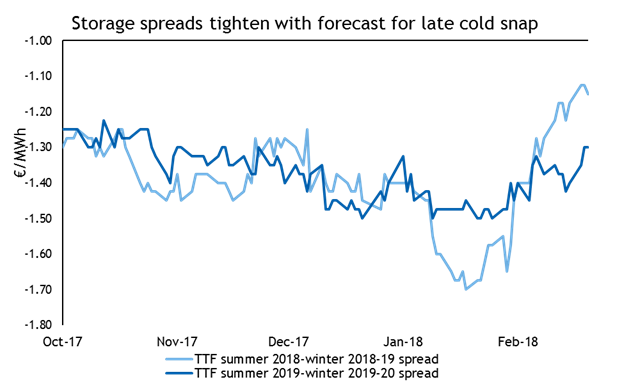 Storage in parts of northwest Europe is on track to come close to emptying for the first time since 2013, when there was also a late winter cold snap.

There are many parallels with the 2012-13 winter, in particular one of the support levels that could be hit if cold weather persists in late March and stocks are heavily depleted.

NBP and TTF prompt prices hit levels that encouraged LNG imports, while sendout at the UK’s Isle of Grain terminal ramped up in March 2013. The regasified LNG stocks were later replaced with an Algerian cargo. 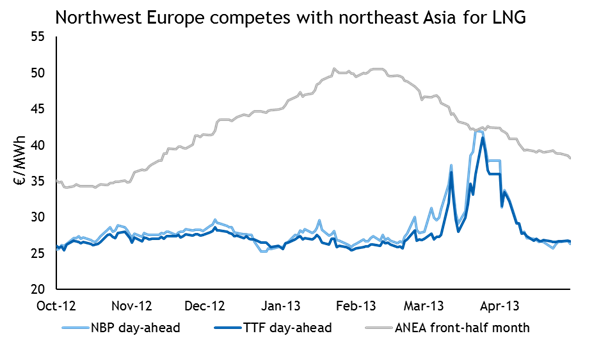 Northwest European prompt prices have remained far short of this potential price ceiling so far this winter. And northeast Asian LNG prices are much lower this winter than in early 2013 because of more global LNG supply and lower oil prices. 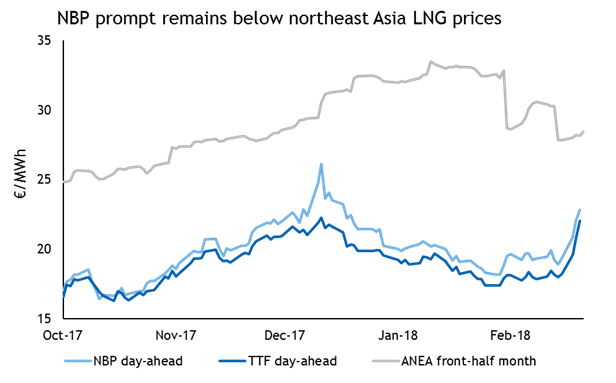 NBP prompt prices have risen to levels that could encourage burning coal ahead of gas for power generation for the second time this winter — a potential price ceiling identified in the webinar. 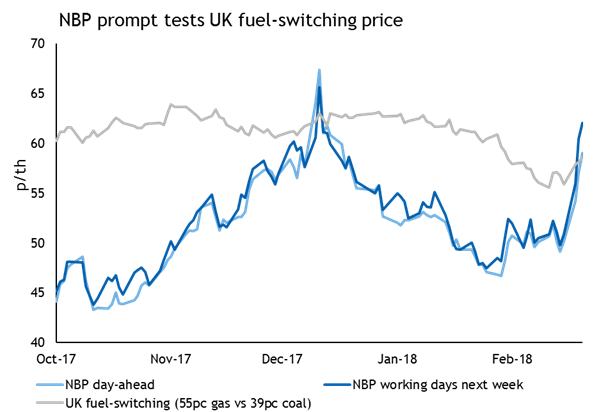 This flexibility was not available in March 2013 because NBP prompt prices were already at levels that were uncompetitive with coal.

Another similarity with the 2012-13 winter is that much of northwest Europe — and especially the UK — is going to have to rely on Germany’s storage capacity. French and Dutch sites could empty before the end of the winter if the stockdraw is high during the upcoming cold spell with inventories already well below average.

But combined French, German and Dutch stocks — excluding Norg, which is used to shape Groningen production — are higher than in 2013. 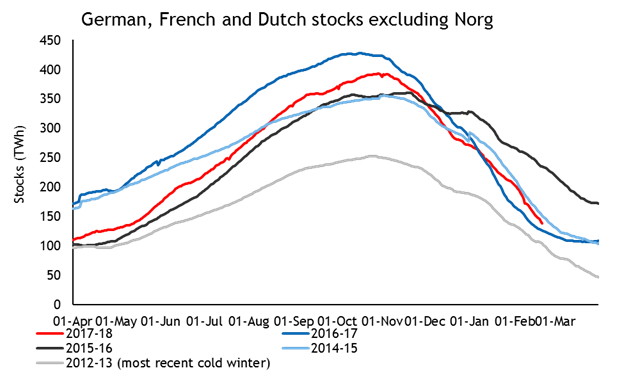 The higher stocks than in 2013 could help meet demand, although the expansion of capacity since then has contributed to the tight seasonal spreads for the upcoming storage years.

But inventories are much lower than in most recent years even after mild weather so far this winter, at least until the upcoming cold snap.

Europe has used seasonal storage more in recent winters than in did previously, despite storage spreads suggesting low intrinsic value. And withdrawals have been particularly high when adjusting for temperatures. 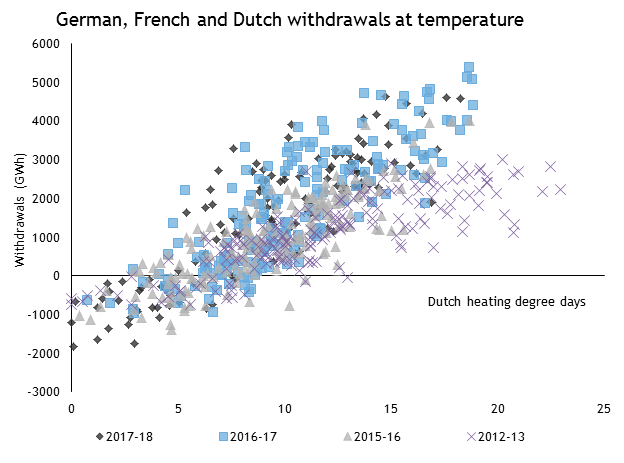 And this raises questions of where northwest Europe’s flexibility would come from in a cold winter similar to 2012-13, given that some countries are on track to empty sites with a mostly mild winter and one late cold snap.

Storage — and potentially LNG imports — would be even more crucial for meeting demand in this scenario. But this dependence on storage is not being priced in, and site operators are still struggling with the tight summer-winter spreads for the reasons explored in January’s webinar.