A resilent Chinese market and disruptions of polymer supply from several regions have unpredictably boosted prices in Asia in the third quarter of the year despite little signs of improved demand in other parts of Asia. The massive addition of new capacities in China and prolonged weak demand in other Asian countries raised concerns among market participants on the sustainability of the current polymer prices.

Polyethylene prices in China have risen to at least a year-high in the third quarter. New US sanctions imposed on an Iranian shipping line have delayed accessibility to Iran-origin high-density polyethylene (HDPE) and low-density polyethylene (LDPE) film supplies and led to gradual price increases of both grades since early July. Iran is a major polyethylene (PE) exporter to China and supplied 2.56mn t or 15pc of China’s PE imports in 2019. The prolonged issue caused supply shortages in China in the third quarter but increased PE imports from the US and Middle East helped to ease supply pressure. A shortage of ethylene-vinyl acetate (EVA) supply in late August encouraged EVA/LDPE swing plant owners to increase EVA production and further reduced supply of LDPE film. LDPE film prices rose by 45pc in five months to $1,175/t cfr China on 17 September – the highest level since May 2018.

Hurricane Laura, which hit the US Gulf coast in late August, caused production disruptions at several US polymer plants. LyondellBasell has declared force majeure on polypropylene (PP) production while Ineos has declared force majeure on both PE and PP given precautionary shutdowns ahead of the hurricane. Westlake Chemical, Chevron Phillips Chemical and Sasol later declared force majeures on PE on damage and power outages caused by the hurricane at their facilities. US production losses tightened global polymer supply through September. China’s imports of US-origin linear low-density polyethylene (LLDPE) and HDPE soared in June-August, likely encouraged by the exemptions of Chinese import tariffs on these grades associated with the US-China trade war that took effect in March. A wide US-China arbitrage in the second quarter on weak US PE demand during the Covid-19 lockdown has further encouraged trade flows. 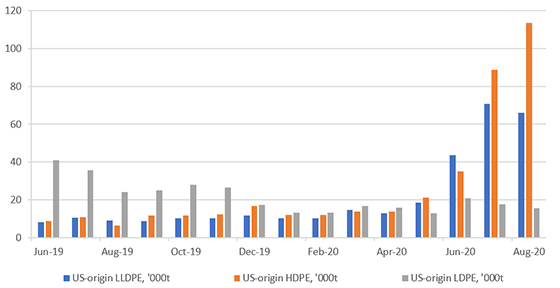 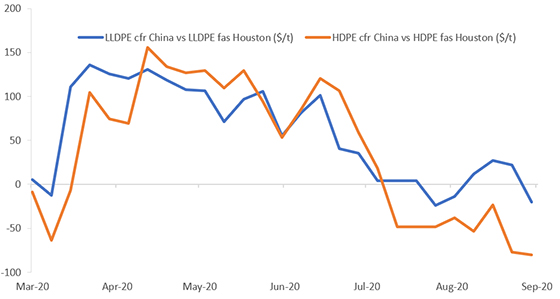 The reduced availability of US-origin PE supplies to Asia associated with Hurricane Laura has coincided with robust PE and PP demand in China. In early September, Chinese converters actively sought raw materials as they ramped up operations ahead of China’s National Day holiday in October. China’s PE prices rose by 5-10pc or $40-100/t within a week across all main grades in early September as buyers sought substitutes for delayed or cancelled US imports. Planned and unplanned plant outages across Asia further tightened polymer supply and boosted polymer prices in all other markets. In southeast Asia and India, fears of a second Covid-19 wave has led to stretched semi-lockdowns in most countries, suppressing the recovery in demand for finished plastic goods. Polymer prices in southeast and south Asia fell in mid-August because of weak demand but rebounded in early September when supply tightened. The completion of plant maintenance and start-ups of new plants in China grew expectations of price falls in the near term. Converters in Indonesia and India have sourced supplies as-needed and favored domestic supply because of competitive prices, shorter lead times, and protection against the risk of currency fluctuations. 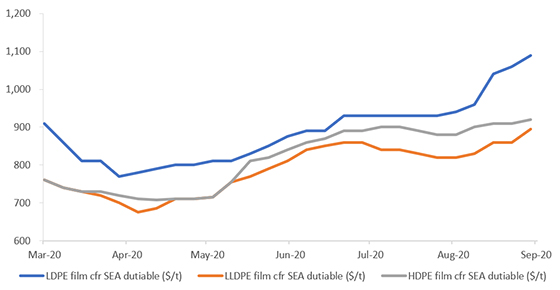 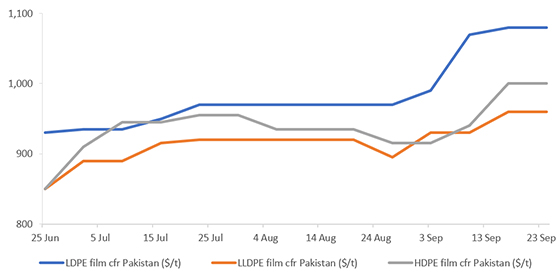 The gradual increase in feedstock propylene cost in northeast Asia has partially supported the Asian PP market, which has seen fewer supply disruptions from US. The PP-propylene price spread in northeast Asia averaged at $100/t in July-August but fell to an average of $60/t in September as propylene supply tightened. The unexpected shutdowns of two residual fluid catalytic cracking units in northeast Asia late in the third quarter have tightened propylene supply and drove its prices higher. South Korean propylene supply is expected to tighten further in October on heavy cracker maintenance. But local propylene production in China is expected to rise following the successful start-ups of Zhejiang Huahong’s 450,000 t/yr and Zhejiang Petrochemical’s 600,000 t/yr new propane dehydrogenation plants in August. 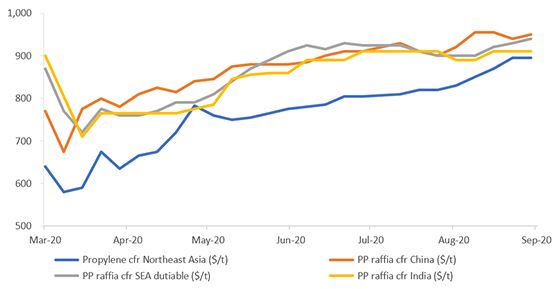 Production disruptions lasting over a month at several US polymer plants are likely to reduce availability of spot supply to Asia in the fourth quarter of this year. But supply in Asia is set to receive a boost as the massive addition of new capacities in China outweighs global supply disruptions. The expected rise in China’s local production is likely to limit any price increase in the short term.

Demand for PP in China is likely to remain strong and supported by continuous recovery in the country’s automotive sector. China’s car sales rose in August for a fourth straight month since May as stimulus measures and the easing of lockdown restrictions ignited a rebound in consumer demand. China’s manufacturing purchasing managers’ index increased in September with the indicators for export and import showing expansions for the first time this year, at 50.8 and 50.4 respectively.

Demand for finished plastic goods is expected to rise across Asia in the fourth quarter in view of the festive season and as restrictions to curb Covid-19 ease. Seasonal gift-giving and consumer spending ahead of the New Year could spur an increase in demand for durable goods in the fourth quarter. But a recovery in global polymer demand may be limited if the risk of Covid-19 transmission increases during winter. This could delay recovery in downstream demand as restrictions to curb Covid-19 tighten.

Low feedstock costs have incentivised producers in Asia-Pacific to maximise polymers production despite weaker demand in this year’s second quarter. Heavy plant maintenance and a demand recovery in China have allowed producers in other regions to balance the demand drop...