The stretched ratio between the prices of iron ore and scrap — two of the primary ingredients in blast furnace and electric arc furnace-based steelmaking — suggests something has to give. 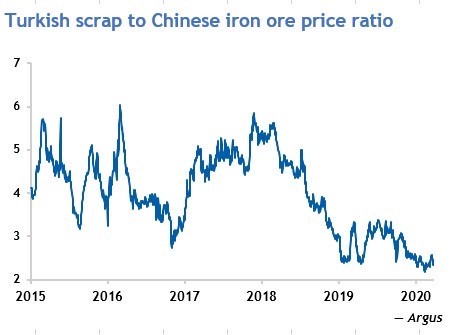 The long-run ratio between Turkish imported scrap and imported Chinese iron ore is typically around 4:1. But since late April, scrap has been less than three times as expensive as iron ore; as of 5 October the ratio was just 2.34:1, with Argus’ cfr Turkey HMS 1/2 (80:20) assessment at $289/t, and the benchmark 62pc Fe ICX iron ore index at $123.05/t dmt.

This ratio is structurally high and prompts the question — is scrap too low or is iron ore too high?

Scrap flow was massively reduced during the height of the Covid-19 pandemic, as industrial production ground to a halt and scrap yards could not find sufficient workers. Since then things have eased, but Turkish demand remains strong, and scrap prices are typically resilient in winter when colder weather constrains supply and logistics.

So many would suggest iron ore has to soften, after a bull-run based upon Chinese demand. Iron ore has performed more strongly than a broad cross-section of globally traded metals, with prices almost doubling from $80/t cfr on 23 March to a recent high of $130/dmt on 14 September. Prices have averaged $73/dmt over the past five years and the last time that iron ore traded hands at similar levels was in early May 2013. This is somewhat surprising given periods of slow residential and non-residential construction during China’s first calendar quarter owing to Covid-19 — among other issues — and a lack of visible stockbuilding of either iron ore and steel. 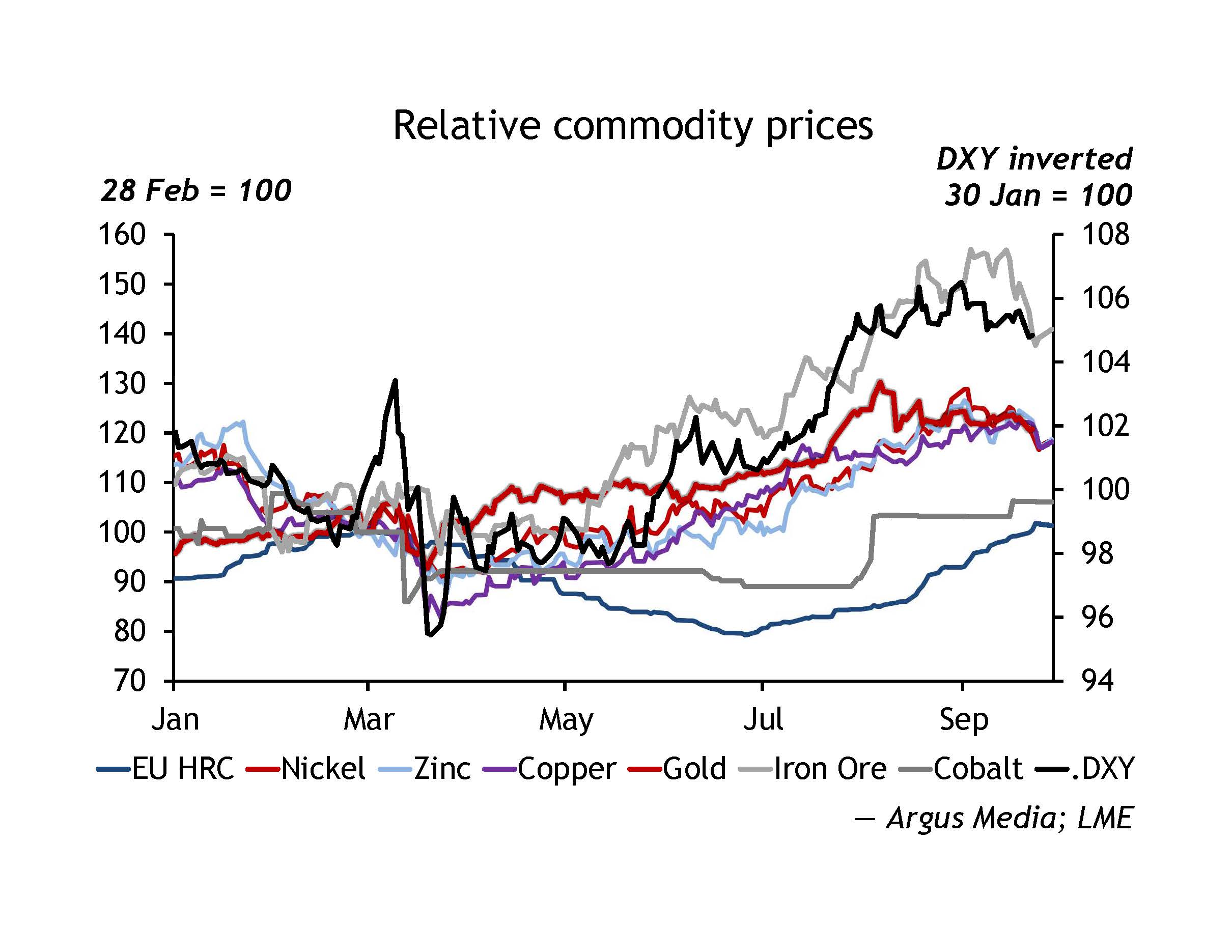 The graphs show the demand side of the iron ore and steel equation. Interestingly, the path of the US dollar versus its trading partners (the trade weighted index, or TWI) is extremely close to that of iron ore prices. This speaks to the resurrection of a free-carry demand game last seen in 2010-14, when lots of smaller traders exploited a depreciating US dollar to profit in Chinese yuan terms.

The game is simple — a trader would use the currently loose credit environment in China to borrow big from one of China’s larger banks. They would then access the forex market to buy US dollars, using them to purchase iron ore. The iron ore is then sold to domestic steelmakers, which can often sell their final product forward to construction companies – new buildings and infrastructure under the Belt and Road Initiative and in China’s central and western provinces are still needed.

The trader has therefore sold out of iron ore and made a profit — or at worst broken even — on the iron ore sale to hold excess Chinese yuan. In the meantime, the US dollar has further depreciated against the Chinese yuan, enabling the trader to buy more seaborne ore to repeat the transactions from a stronger financial starting point.

But stocks of port-based iron ore and steel are now building back to 35 days’ worth of consumption, and prices look set to repeat their cyclical falls, leaving such traders nervous and seeking to choose an exit point over the coming weeks. 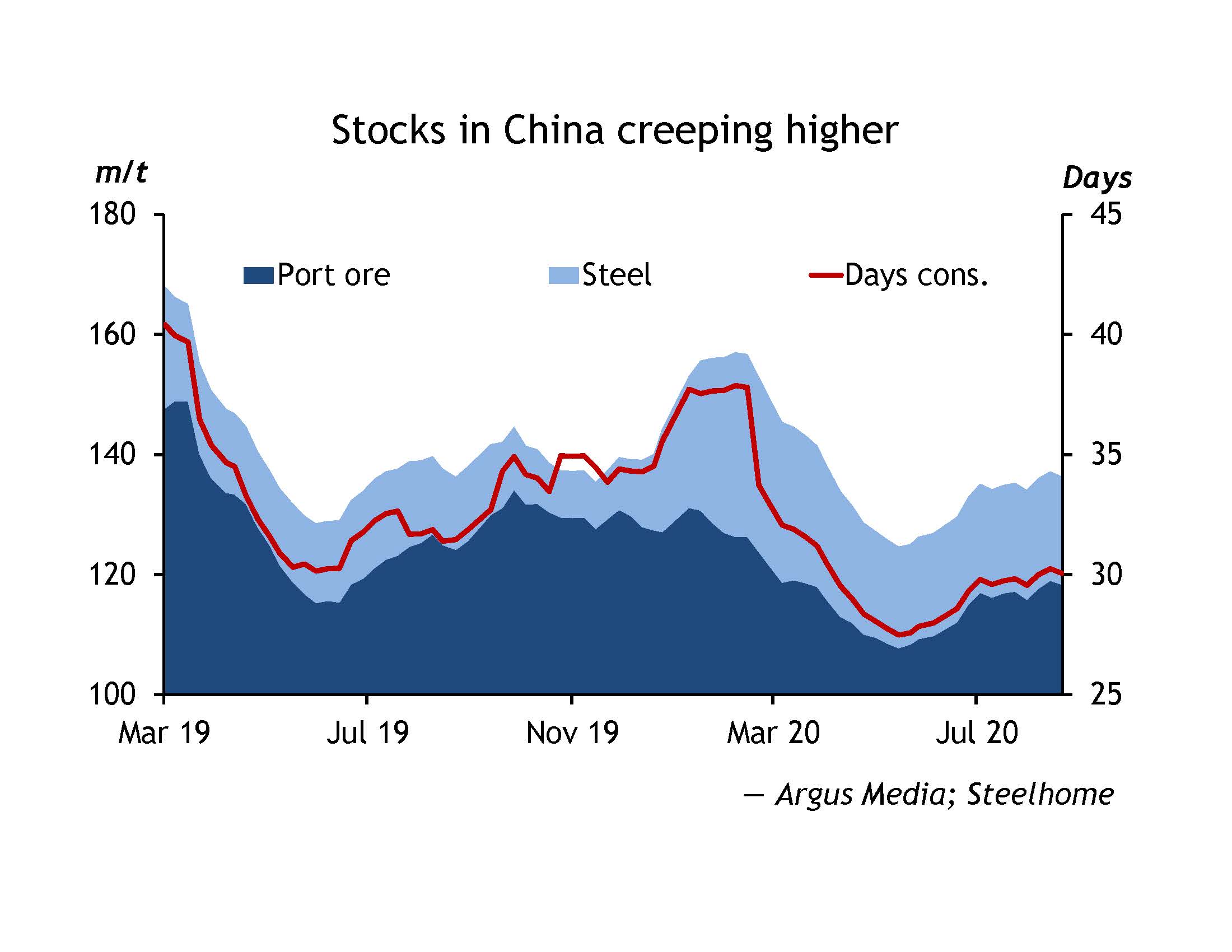 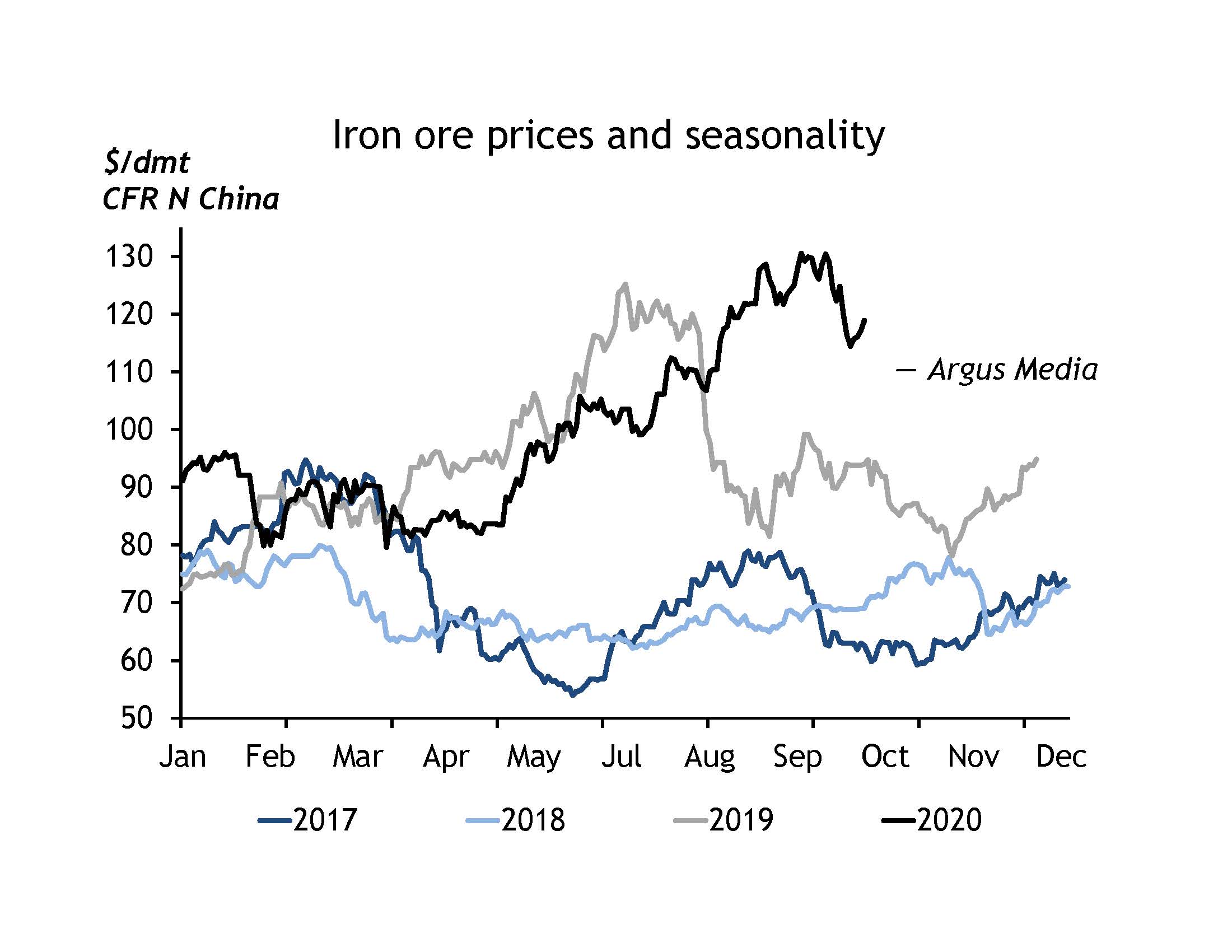 Chinese demand for iron ore tends to drop in September and over the fourth quarter owing to two key supply drivers, and one on the demand side. The main demand driver is that colder weather during the northern hemisphere winter curbs construction activity. February saw a 44pc year-on-year drop in floor space started in the Middle Kingdom, and that activity has grown at negative rates for all months this year.

On the supply side, the third and fourth quarters are seasonally strong months for supply of seaborne iron ore, the main producers of which are all based in the southern hemisphere. Rio Tinto’s Pilbara shipments from Australia have grown by 3pc from a year earlier in the first half of 2020, and the company still expects to ship 324mn-334mn t this full calendar year.

Brazil’s Vale meanwhile has reduced its guidance to 310mn-320mn t, as a result of unscheduled maintenance and operational problems caused by Covid-19. Reduced supply from Brazil to China has accentuated and perpetuated an annual supply deficit estimated at up to 60mn t this year. Rio Tinto has split its full-year guidance almost evenly between the two halves of this year. But Vale needs output to surge over the next few months given that it has only produced 127mn t, or 41pc, of its 2020 guidance over January-June. BHP and FMG meanwhile need to maintain production at around 280mn t and 170mn t this year, respectively, and have produced 45pc and 50pc of their respective targets.

All of these iron ore production statistics show that supply to China from overseas will surge quarter on quarter in the latter months of 2020. This is at a time where Chinese domestic supply decreases as lower temperatures impede digging and concentrating operations as ores begin to freeze. These mines are typically higher-cost magnetite operations, with costs exceeding $100/dmt – a key factor in keeping seaborne prices as high as they have been in the second and third quarters. Seaborne iron ore prices typically fall over winter because these forces of cost competition fade during China’s colder season.

Mining is no stranger to digitalisation. The widely held perception of the resources industry is one of workers in mines and not one of machines running almost everything.