Iron ore prices are falling from its year’s high, China continues to battle African swine fever (ASF) in its hog population, while a slip in newbuild deliveries could dampen freight rates.

How did we get here?

Covid-19 disrupted the shipping industry in all commodities in 2020. But while a boom in floating storage tied up large parts of the tanker fleet and caused a period of record-high freight rates, the dry bulk market merely experienced weaker demand. Fleet inefficiencies, particularly surrounding crew changes and quarantining requirements, were not enough to offset this, merely adding to shipowners’ costs while they dealt with consistently low freight rates.

Although it may have seemed unlikely at the time, this set the stage for a record-breaking start to 2021. The first factor was the relative speed with which China, the world’s largest dry bulk importer, quelled its initial Covid-19 outbreak and released stimulus measures aimed at boosting its manufacturing and construction sectors. The second was its decision to ban Australian coal imports and replenish its grain reserves, requiring long-distance imports of both in large volumes. This, combined with unprecedented tightness in the container market and a host of smaller factors, drove rates beyond what even the most optimistic shipowner could have expected so far this year.

The recovery in rates touched on all dry bulk freight markets. Panamax markets were particularly boosted by China’s hog herd recovery, following the 2018 ASF, plus depleted domestic grain reserves that played a key role in 2020. Potential Covid-19-triggered supply disruptions. and an uncertain bilateral relationship with the US, prompted China to import 98.5mn t of soybeans in the October 2019-September 2020 marketing year, up by 19pc from 82.5mn t in the previous marketing year, according to the US Department of Agriculture's World Agricultural Supply and Demand Estimates report on 10 December 2020.

While there were expectations of reduced volumes at the start of 2021, global grain shipments actually increased by about 18.5pc from a year earlier for January and rose by about 7.5pc during January-June. Corn exports from the US led this growth, with an export of 45mn t for the first half of 2021 compared with 26.8mn t in 2020 over the same period. Grain shipments play an essential role in the Panamax market, especially overlapping with strong demand from other commodities in 2021, as each shipment of grain from east coast south America or the US Gulf is equivalent in tonne-mile demand to 2-3 shipments of coal from Australia or from Indonesia.

China’s ban on Australian coal from late 2020 led to an initial reduction of Capesize demand out of east coast Australia. But it also caused a shift in coal dynamics, with Indonesian suppliers catering to Chinese demand, together with a pick-up in shipments from further afield like Russia’s Baltic ports, Colombia and South Africa.

This meant more Capesize and Panamax shipments from these countries, while Australian coal shipowners sent their coal further afield to India, supporting dry bulk tonne-miles. Russian coal exports increased by 13.7pc from a year earlier to 107mn t during January-June, according to CDU TEK, a branch of the Russian energy ministry. A large part of the new coal volumes this year from Russia to China arrived in Capesize bulkers from the port of Taman in south Russia. Taman during January-June handled almost 10.1mn t, which was almost three times more than a year earlier. A laden trip from Taman to east China’s Qingdao takes about 31 days, double that of a laden trip from east coast Australia lasting 14-16 days. Roughly half went to Asia-Pacific, including the Indian Ocean region, with the other half sent to the Mediterranean.

The ban also caused laden vessels with Australian coal to be left stranded off Chinese waters for more than a year, which ultimately reduced tonnage supplies, although many have now been released.

Iron ore exports from Australia, the largest supplier to China, rose by 4.7pc from a year earlier over January-May, tracking strong steel demand. But this has since fallen as Beijing took steps to curb "unreasonable" price increases in bulk commodities from mid-May, dashing outlooks and slowing Cisa mills' output.

The resurgence of freight rates for container vessels also led to cross-segment utilisation. Rocketing freight rates caused breakbulk shipments to be a viable alternative, even if it meant chartering a handysize vessel for a partial load. Handysize vessels continue to remain an alternative for container shipowners, especially when traffic is disrupted, following situations like the unexpected vessel grounding in the Suez Canal in March that impeded traffic, and the current Ningbo terminal closure in east China because of Covid-19.

This leads to a bottom to top push, as demand fundamentals for handysizes, and supramaxes to a certain extent, are positively skewed following an unexpected gain in utilisation.

Rates for the first half of 2021 were also supported by lower deliveries than initially expected, with many of the scheduled newbuild deliveries delayed into the second half of the year. The overlap of all of these factors in 2021, compared with the double unforeseen events of 2020, caused Capesize time charter equivalent rates for the key west coast Australia-north China route to average $25,247/d for the first half in 2021 compared with an average of $6,238/d over the same period in 2020. 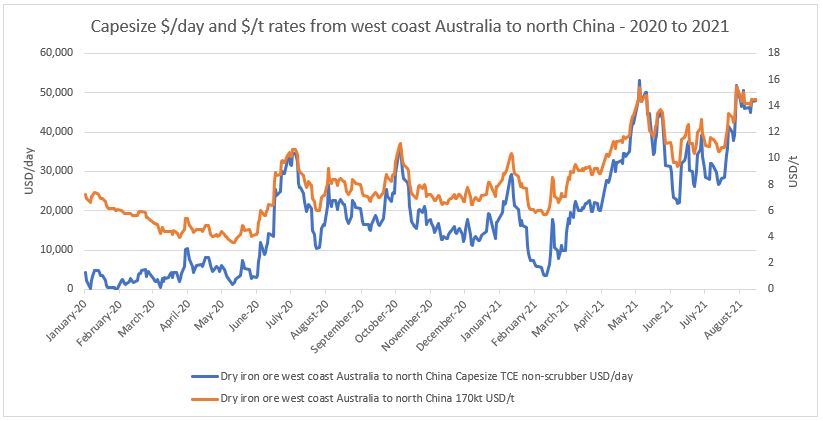 What does this mean for the future?

After such a positive start to the year, shipowners are naturally likely to dream big. To a large extent they have a good reason to be confident.

Iron ore export volumes are likely to remain solid, despite the fall in ICX 62pc Fe cfr Qingdao iron ore import price from the year’s high at $235.55/dmt on 12 May to $161.80/dmt on 16 August. The fall was triggered as steel production curbs intensified following the 1 July anniversary of the Chinese communist party. Sintering units at Tangshan shut down following the rolling out of level 2 pollution control measures.

But shipments are still expected to remain robust, with a strong end to the third quarter expected as Australia-focused mining firms BHP, Fortescue Metals, Roy Hill, Atlas Iron and Mineral Resources recover from maintenance requirements. Rio Tinto is expected to catch up with export rates to meet the lower end of its output guidance to make up for a slower start to the year, after completing maintenance at its 45mn t/yr East Intercourse Island berth at Dampier in June. Brazilian weather conditions have also been in line with seasonal trends and the country is expected to achieve higher peak exports in August and September.

A hotter than average summer in northeast Asia is expected to keep thermal coal exports firm. China's thermal power generation, mainly based on coal, reached 524TWh in July, according to the National Bureau of Statistics. This was a rise of 12.7pc from the same period last year and the largest increase since March.

The increase in power and coal demand, as well as the fall in domestic coal production because of safety inspections, especially with a Qinghai province mining accident in August that killed at least one worker, will continue to compound tighter supplies in the domestic market. The increased demand is expected to sustain tonne-mile demand, as long-haul trades from South Africa remain attractive into northeast Asia given competitive pricing. China’s ban on Australian coal could further support imports from Russia’s Baltic ports, Colombia and South Africa.

Grain might be the commodity with the most uncertainty. China has battled a new outbreak of ASF since March 2021, which could lead to a significant slowdown in imports if it escalates. China’s massive import volumes in the first half of the year may leave it needing less, particularly with expectations of a productive local harvest. The availability of exports from the east coast of South America, which was a major contributor to dry bulk tonne-miles in the first half, is an issue after crop damage, poor conditions and bad weather in Brazil. China’s corn prices also remain high after stocks fell to almost zero after years of falling output. This could subsequently reduce corn imports and increase demand for wheat.

But as long as the ASF outbreak remains under control then the seasonal pick-up in exports from the Black Sea should help to sustain tonne-miles. Black Sea exports could also outperform those in 2020 because of larger harvest yields.

Fleet growth in the second half of the year is also likely to be quicker than in the first half. The record high rate environment has put the brakes on scrapping, while many of the newbuild deliveries that were delayed in the first half of the year are now set to arrive. But uncertainty in the long term about upcoming environmental regulations has kept the fleet to orderbook ratio at a near 20-year low. Shipyard space for new orders is now at a premium after a boom in containership orders.

Overall, demand for iron ore should be sustained as steel margins remain firm. Iron ore prices on a 2021 year-to-date average are close to double that over the same period in 2020. China’s coal shortage and the hotter weather in northeast Asia should also keep tonne-mile demand solid. Freight rates for dry bulk segments are expected to be sustained for the rest of 2021, as countries increase their Covid-19 vaccination rates and reopen their borders in a boost to their economies.