Argus WCS Houston -- and the ICE financial contract that settles on it, known as ARV – have become the first-ever robust heavy sour crude benchmarks at the US Gulf coast. Rising production of oil sands crude in western Canada and a build-out of pipelines to the Gulf coast are providing ever-stronger support to the new benchmarks. 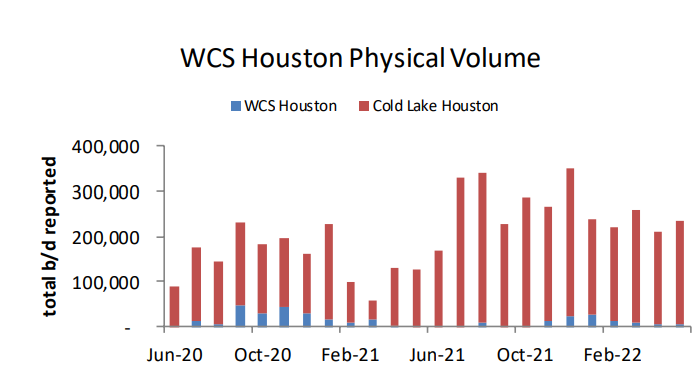 There is also a great diversity of traders in the WCS Houston market. There were 17 unique participants (some trading as both buyers and sellers) involved in April trade of WCS Houston, and no one company accounted for more than 17pc of the trade volume.

Many leading sour crude grades from Latin America have been seen synchronizing with the WCS Houston price. Mexico’s Maya, which is very similar in quality, has been particularly well aligned with WCS Houston, and lighter sours Vasconia and Castilla from Colombia have fallen in step. Even Ecuador’s Napo and Oriente, which typically sell to the US west coast, seem to be taking pricing signals from WCS Houston.

WCS Houston also offers some international price transparency through Argus’ WCS cfr China price assessment, which is calculated daily by adding freight cost elements to the Argus WCS Houston price. Looking at the delivered Chinese coast prices of WCS and a grade such as Iraqi Basrah provides a glance at the arbitrage for moving heavy sour North American crude to Asia. This could be especially helpful as the number of heavy sour crude cargoes leaving Vancouver increases.

While many crude benchmarks around the world – including notably Dated Brent – are challenged by falling volume of underlying production and trade volume, WCS Houston appears likely to enjoy growing volume of trade. Oil sands production in western Canada has recovered faster from COVID downturns than the US Permian or other basins, with oil sand output hitting 3.2mn b/d in the first quarter of 2022. Canada is now routinely the largest supplier of imported crude at the US Gulf coast (see graph for January 2022 below): 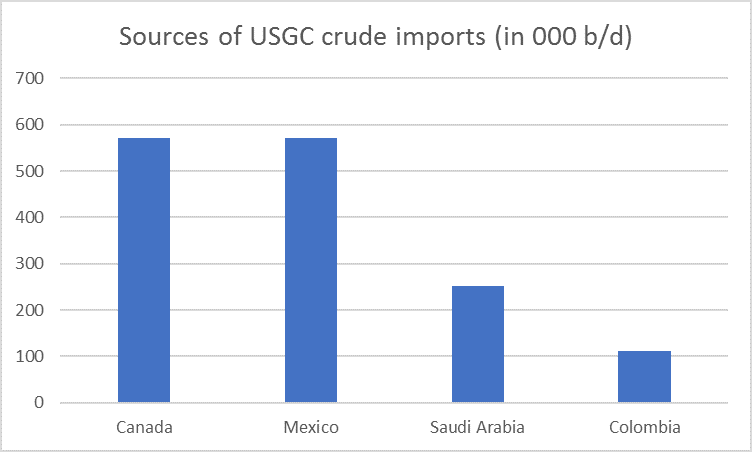 New infrastructure improvements – including a 370,000 b/d expansion of Enbridge’s Line 3 last year – are eliminating bottlenecks on the path to the US Gulf coast for western Canadian crude. Enbridge’s key southbound crude pipelines used to be in apportionment nearly every month, meaning that shippers would be able to move only a fraction of the crude they nominated to move through those lines. But for the last three consecutive months, there has been no apportionment on Enbridge. More Canadian crude making its way to the US Gulf coast means more relevance for WCS Houston.

It also means we could see a scenario where Chicago-area refineries in Padd 2 will have to bid to keep heavy Canadian crude from moving the whole way to the US Gulf coast. This means that both Padd 2 and Padd 3 refiners are likely to be pricing their Canadian crude purchases on a WCS Houston basis.

In the first of a three-part podcast series focused on global asphalt/bitumen markets, we’ll take a deep dive into specific regional market impacts as reflected in the Argus Asphalt Annual 2022.

The US Crude Export Chronicles: May 2022

An onslaught of additional crude supply from the US Strategic Petroleum Reserve (SPR), coupled with the EU’s plans to phase out Russian oil, has global supply and demand fundamentals teetering.

Markets in Conflict: Implications for the World Economy

The Russia-Ukraine conflict is causing wide ranging impact across commodity markets, with short and longer-term implications for the world economy.