To say that the oil market is in trouble is to test the limits of understatement.  Producers’ failure in Vienna last week to find an agreement on production strategy for the remainder of the year adds to the misery of collapsing oil demand as the coronavirus continues its spread. For anyone in the oil sector there is simply no good news. Crude is weak, products cracks are weak, refinery margins are weak and oil demand is imploding. The only people possibly to benefit will be motorists – assuming they can get out of the house to drive in the first place.

It is fair to say that no one (with the possible exception of the Russians) saw this coming. And it is pretty extraordinary that it has in fact happened at all. To all intents and purposes the market is being allowed to melt down over a dispute about a couple of hundred thousand b/d of production, the amount that Opec probably wanted Russia to chip in with - but which Moscow was unprepared to commit to.

In reality this is not about volume but principle. The Vienna meeting was all about finding a solution to the imbalance emerging in the market as demand growth dried up. The problem was clear, so too was the solution. But whereas Opec, led by Saudi Arabia, wanted a decisive, meaningful reduction in output to last for the whole of the year, Russia was only prepared to agree to roll-over the existing agreement. This would not have been enough to prevent prices from weakening further so Saudi Arabia – almost certainly already irritated by Russia’s persistent failure to make meaningful cuts in the past -  probably felt that it had nothing to lose by confronting Moscow and trying to push through the more radical proposal.

A one third drop in crude price is going to hurt everyone in the upstream but there is no sign at all at the moment that anyone is prepared to compromise to reverse this. On the contrary. Led by Saudi Arabia, Opec producers have raced to slash sales prices to customers while reports suggest that the taps are about to be opened wide. A full-blown price war is under way it would seem. 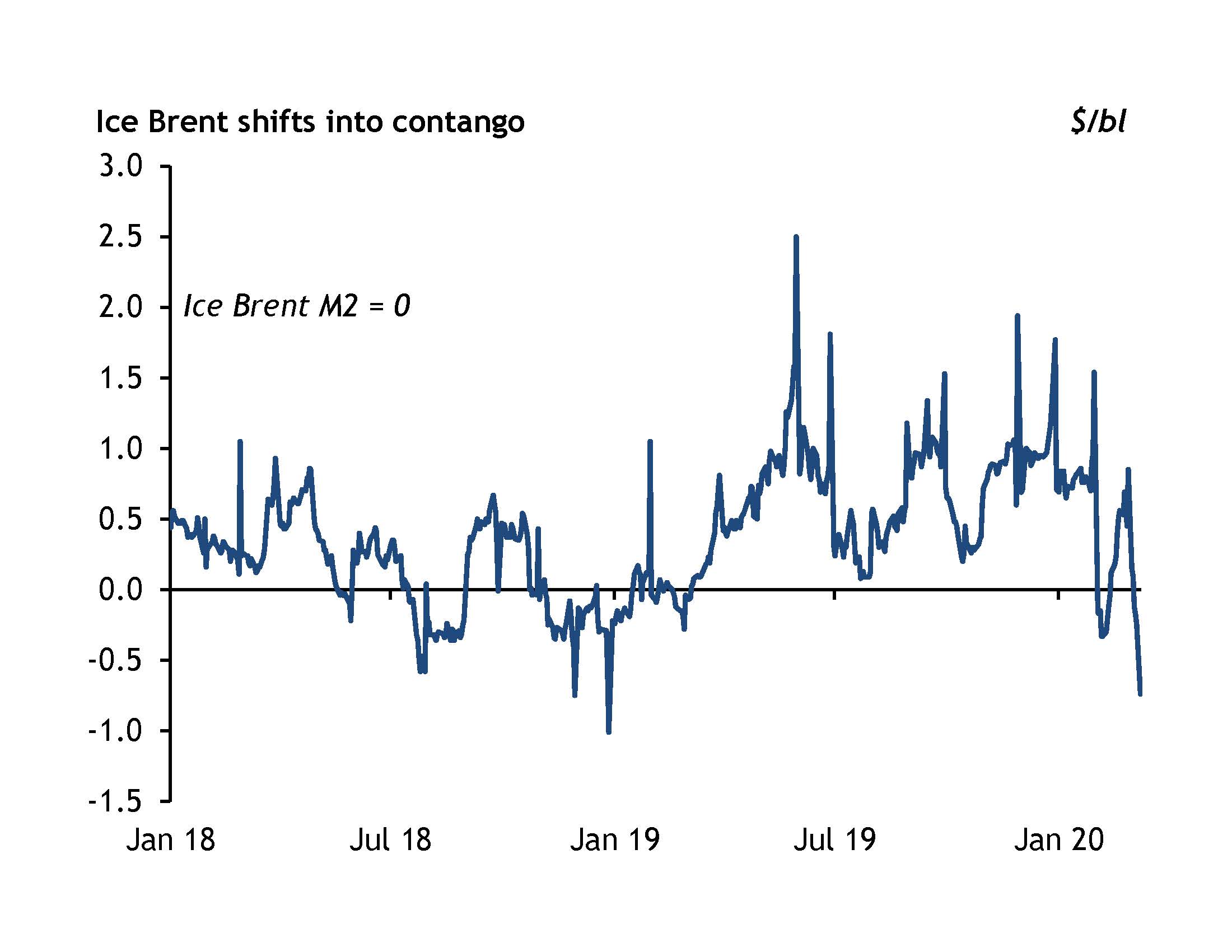 It is way too soon to judge where this could end. The sheer scale of what is happening on the supply side largely takes the issue of oil demand out of the equation. The chance of recession and an outright fall in demand is mounting and would clearly be negative for prices. But more important to future price direction will be the action and reaction of producers – how long Saudi Arabia and Russia are prepared to continue their arm-wrestle and what it means in the interim for upstream investment elsewhere.

In the US shale patch the rate of decline in existing wells is only just being offset by production from new drilling and it will not need much reduction in spending to reduce the latter. Possible production from drilled but uncompleted (DUCs) wells and hedging may keep production going for a while but the longer that prices remain low, the more we can expect US production to suffer. As a reminder, it is worth pointing out that production in the US shale basins fell 200,000 b/d in the first year after the price fall in 2014 and 400,000 b/d in the second year. It remains to be seen how far president Trump may be prepared to go to assist US upstream producers to weather the storm.

This is not just a repeat of 2014. Then it was all about confronting non-Opec producers and US shale in particular in a fight for market share. This time round it is an argument about sharing responsibility for managing the market. Opec may think that winning back market share from US producers could be part of the long-term solution but it would do well to remember the hard lesson learnt in 2014-2016. Forcing competitors out and winning back market share is a long and painful process. 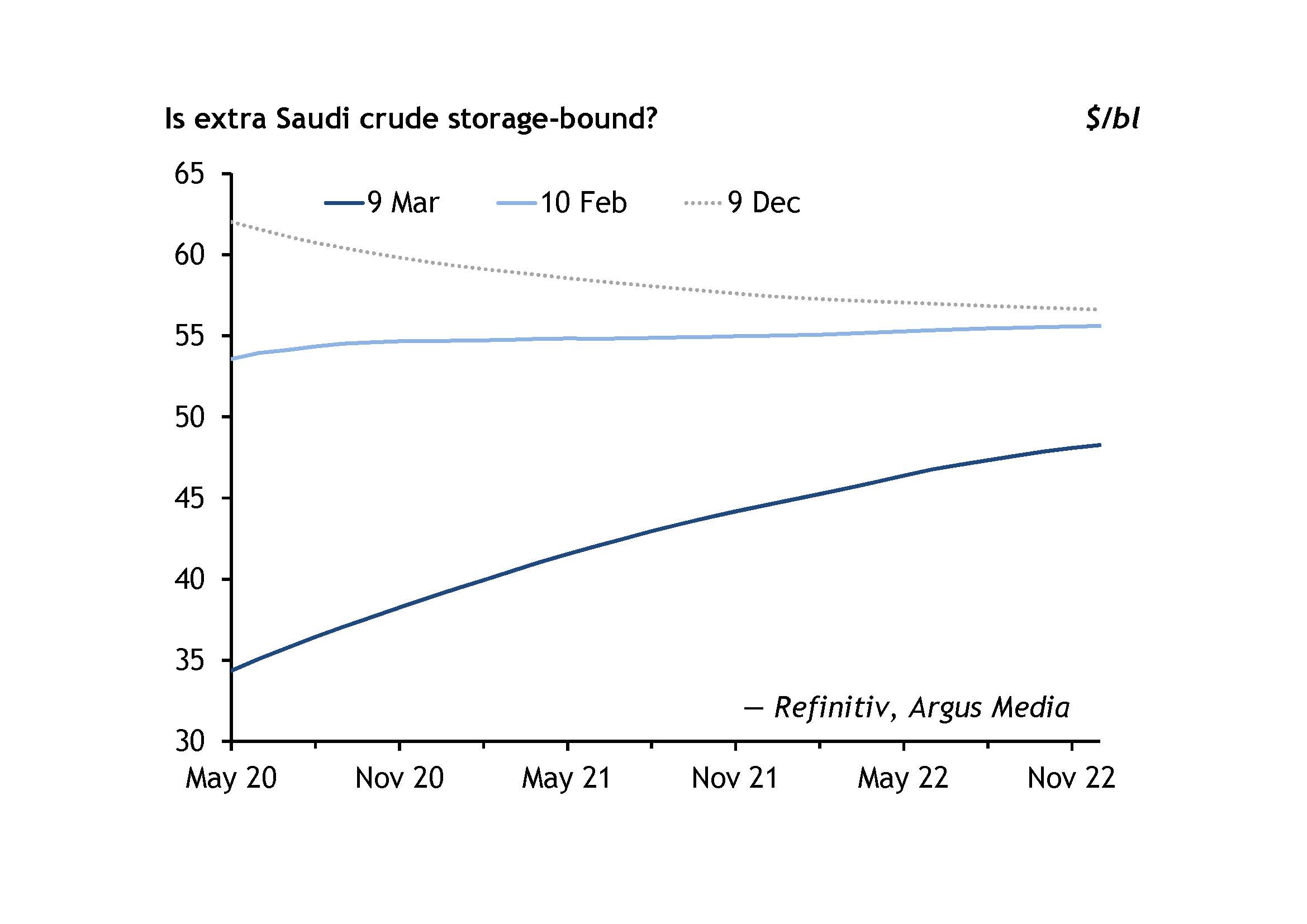 It is almost pointless trying to second guess future pricing in the current environment, but an attempt has to be made. Absent a major climb-down by one of the two main protagonists — today Russian oil minister Novak held the door open to a renewed sit-down among Opec+ ministers, without saying he would change course — and given that both Russia and Saudi Arabia have significant financial reserves to fall back on, the standoff looks likely to persist at least for this year. But both will be hurting come 2021 – Saudi Arabia needs around $80/bl to keep on an even keel, Russia about $55/bl reportedly. There must be a chance that December in Vienna will see a new attempt to impose a programme of supply management rather than face another year of low prices and revenues. In the history of oil pricing, this is what has always happened.

In 2020 we see North Sea Dated averaging $41/bl, in 2021 $50/bl - assuming that producers get their act together again. If they don’t then low prices will persist, to the detriment of not just producing governments, but the wider oil industry as a whole, not least those sinking billions of dollars into US crude export infrastructure. It is also likely to make it harder to achieve targets to reduce carbon emissions. As has often been said in the past, the oil price may be just too important to leave to the un-checked buffeting of market forces.

The riddle of Opec

Opec is an organisation riddled through with contradictions. It has ceded control of the oil market in an attempt to retain control of it. It is tackling high-cost oil by making low-cost oil expensive to produce. It talks of a market rebalancing being just around the co...

Opec and the ‘moneymen’

Crude supply is finally showing signs of falling in the US, where stockpiling slowed for the first time in months as US refineries begin to eat into the excess. A sign of success, then, for Opec’s Saudi Arabia-led experiment of putting the squeeze on high-cost producers...

Global oil fundamentals on the eve of Opec

After a year and a half of lower crude prices, there is little expectation that Opec, under pressure from dominant force Saudi Arabia, will change course at this week’s meeting.