Freight rates for Asia Pacific Panamax routes have been moving higher since the start of September, as multiple typhoons have led to disruptions in vessel schedules, thinning spot vessel supplies in the northeast Asia region. But are rates able to sustain at these higher levels? Would the coming winter season help? Or are concerns looming on the horizon?

Singing in the rain 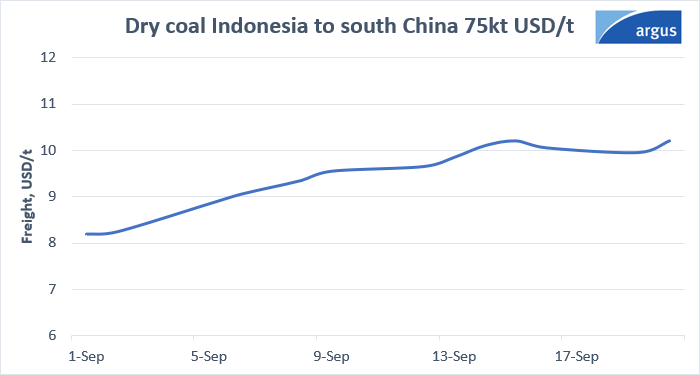 The most severe impact was on ports along China's east coast like Changjiangkou, the mouth of the Yangtze River, once Muifa made landfall. Vessels were forced to anchor at outer port limits in the event of port closures which caused congestion and decreased tonnage supplies amid high demand, in turn, raising rates.From a demand perspective, an increase in coal flows towards China could also arise in the short term as the Communist Party of China (CPC) is expected to hold its 20th national congress on 16 October. And charterers would reportedly prefer to import before the event as high-polluting enterprises like refining and steel plants in and around Beijing are usually ordered to limit production for half a month before and after the event.

When the rain clears

But the recent increase in freight rates have predominantly been because of the disruptions from the typhoons.

Should vessel supplies return to normal, prevailing fundamentals could take a toll on rates again, as it did earlier this year. Freight rates were on a downward trend since mid-June and fell by 39% from $13.50/t on 15 June to $8.20/t on 1 September because of weak fundamentals.

Regional vessel supplies have been higher this year, as shipowners were reluctant to ballast towards the east coast of South America (ECSA) on lower and inconsistent demand. High bunker prices and a long ballast journey also meant that shipowners would need a relatively high investment to head towards the west, which subsequently encouraged many shipowners to keep their vessels in the Asia-Pacific region. A ship sailing at 12.5 knots from east China would need approximately 36 days to reach ECSA.

Demand for low calorific value Indonesian coal had been subdued, as China’s coal stocks were also sufficient, market participants said. Unlike last year, when China had heavily imported coal the previous year to meet the robust power demand on the back of an economic rebound from the initial impact of the Covid-19 pandemic.

Coal supply concerns have also reemerged from Indonesia, despite their lifted ban as Indonesian state-owned utility PLN still faced problems locking in coal supplies for its power plants as the coal producers were reluctant to supply to its power plants because of the disparity between domestic and seaborne prices, the company said in the beginning of August 2022. Because of such shortage, PLN had requested aid from Indonesia's energy ministry (ESDM) to help fulfil demand from the country's power plants and avoid a power crisis, with it seeking 6mn t.

The ESDM said that it has drafted a letter of appointment of up to 5.4mn t of coal. Suppliers chosen by the ESDM would be required to supply a specified volume of coal to PLN over a set period of time. Once appointed, PLN and the supplier will have an agreement on the terms of the coal sale including a coal delivery schedule, so that there will be no reason for either party to delay delivery, the ESDM said.

The imports from Indonesia slowed during the beginning of 2022 because of tightness in seaborne coal supplies as Indonesia banned exports of coal. The Indonesian government announced at the end of December 2021 that it would ban coal exports for January to address a domestic supply shortfall. Uncertainty over restrictions and potential backlog issues had dampened enquiries for loading cargoes during the period. Freight rates for Panamax shipment of dry coal on the Indonesia to South China route had plunged by about 25% m-o-m on 31 January 2022. 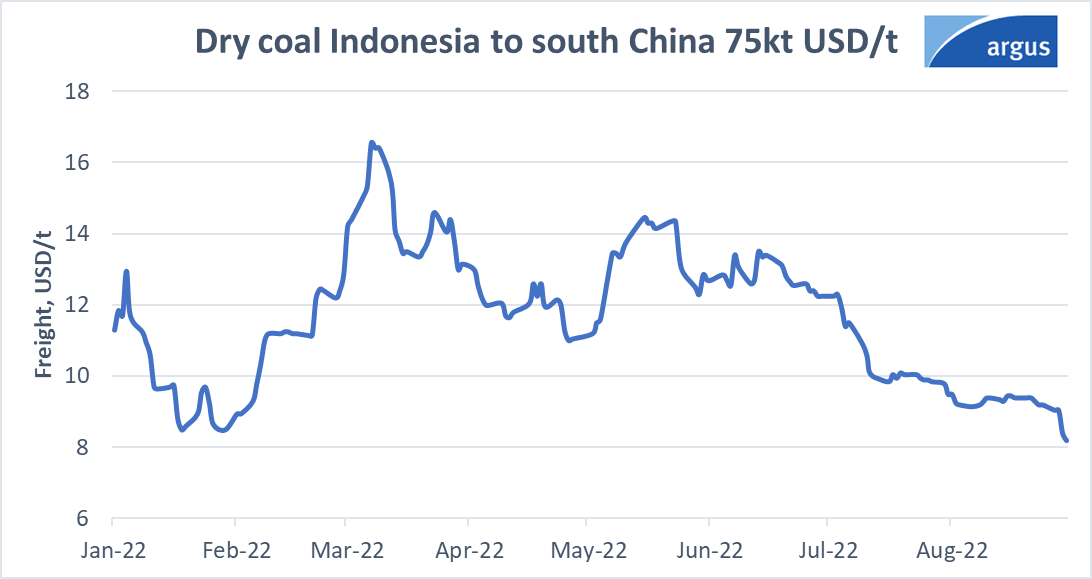 Freight rates could move higher, if the third La-Nina weather trend developed in the Pacific region during the winter which could boost coal demand. Japan's Meteorological Agency forecasted a 40pc possibility that temperatures over the December to February 2023 period would be colder than its 30-year average. JMA also forecasted a 70pc possibility that La Nina weather conditions would occur throughout the winter period, further exacerbating the possibility of a colder winter, which would then lead to a likely increase in coal demand.

But the issue surrounding coal trade is more on the supply side rather than the demand side as investments on mining coal have been low since the past few years owing to environmental concerns, according to the lead BRS Analyst based in Singapore.

Global energy demand has suddenly spiked as the world recovers from the pandemic but there isn’t just enough coal to meet those demand while the renewable sector continues with lack of infrastructure, the analyst said.

Seaborne coal market would be undersupplied in 2022 amid increased demand from Europe after the Russia-Ukraine conflict which rose the gas-coal fuel-switching in the country, according to commodity trader Noble Resources. Noble expects gas prices (the alternative) to remain high, supporting coal demand, said Noble's head of research Rodrigo Echeverri at the Coaltrans Asia 2022 conference.

The Indonesian production has been hampered this year by various factors, including unseasonal heavy rainfall that flooded mines and curbed transport operations, along with a shortage of heavy mining machinery and if a month-long ban on exports occurs again, as it did in January.

So, there is a possibility of lower freight rates as well, if coal supplies prove to be insufficient, and if vessel supplies rise again. There is also a concern that demand for Panamax vessels might be lower, as some charterers may prefer 55,000-65,000dwt Supramax vessels, given the lack of floating cranes in Indonesia.

Dry bulker rates could come under pressure globally as very few grain cargoes have left Ukraine so far this quarter. The third quarter is typically when Ukrainian grain reenters the global market. But for the third quarter of 2022, only a handful of vessels have made it...