Booming US crude production and resulting export volumes are drastically changing global crude trade flows. In this episode of our six-part US crude podcast series, our senior reporters Amanda Hilow and Eunice Bridges discuss the midstream frenzy to build more pipelines, the new market dynamics for the waterborne market and where all this US crude is headed.

Amanda: Welcome to the podcast from Argus, the leading provider of energy and commodity price benchmarks. This is one of a six-part series about the prices affected by the changing US crude oil infrastructure scene. I'm Amanda Hilow, and I'm the senior reporter leading coverage of the US waterborne market in the daily Argus Crude and Argus Americas Crude publications.

Eunice: And this is Eunice Bridges, Senior News Reporter at Argus Media. It is a dynamic and exciting time to cover the crude market as the US is seeing record exports of crude after a ban on most exports was lifted in December 2015. Exports already at around 3mn b/d and are expected to continue to rise as production is booming, especially in the prolific Permian Basin in Texas and New Mexico. The increasing supply and global demand for this US crude has led to a midstream frenzy to build pipelines to the US Gulf coast and expand ports. It has also created a new export market and new opportunities for shippers.

>Amanda: You're absolutely right, Eunice. We launched WTI FOB Houston in September of 2018, and we launched Bakken FOB Beaumont the month after that. This was the first time that we were able to truly capture a US intelligence assessment for waterborne crude, and this market has taken off rapidly since then. We've gotten as many as 10 cargo deals reported in a single week into those assessments, and we expect that volume to continue growing. Both grades have nearly tripled their discounts to the Ice Brent benchmark over the last month as production continues to grow and on expectations that more of this volume is about to hit the water.

Eunice: That is right, Amanda. A lot more is about to hit the water. Midstream companies throughout the US are building large pipelines and expanding the ones they already have to move as much crude as possible to the Gulf coast. As we speak, three major projects are gearing up to move more crude to the Texas Gulf coast from the Permian Basin this year. One is a project by Plains All American Pipeline called the Cactus II line. This pipeline was originally planned to be 585,000 b/d - already a very large pipeline - but Plains said last year that they would start it at 670,000 b/d because of the strong demand they were already seeing for exporting US crude. The line will be ready to move crude from several points in West Texas to the Port of Corpus Christi in August. According to a recent filing to federal regulators, it is unclear how much crude will run at first. Plains have said previously that Cactus II will begin partial service in the third quarter of this year and full service in April 2020. 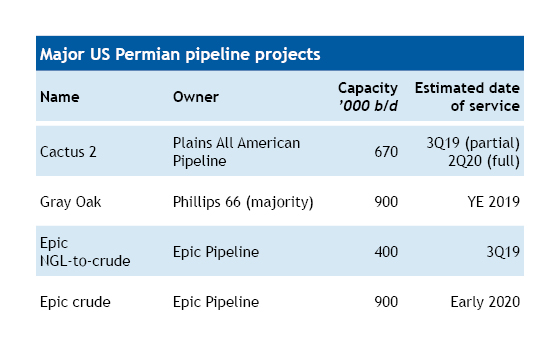 Amanda: So, I'm really glad that that's the first one that you mentioned, Eunice, because I have definitely already begun to see a huge uptick in market activities out of the Corpus Christi area since the start of the August 2019 US trade month. Can you talk about some of the other projects that are coming online?

Eunice: Definitely. The two other major projects coming online this year are both also targeting Corpus Christi, and one of them also has a destination near Houston, which is also a major hub for crude exports. Phillips 66 is the majority owner of one of the projects, the 900,000-b/d rail pipeline, which is on schedule to move crude by the end of this year. Phillips 66 in June said it had already installed 500 of the 850 miles of the pipeline connecting the Permian and the Eagle Ford Shale in south Texas to five refineries and four export facilities. Gray Oak will also deliver crude to Corpus Christi and terminal infrastructure south of Houston.

Amanda: And then there's also EPIC's NGL conversion line, right? I heard it should be adding at least 400,000 b/d of additional capacity as early as August in the Corpus and Ingleside export hub.

Eunice: That is correct. In addition, EPIC has a much larger crude project from west Texas to Corpus Christi, which should start in early 2020. That project could be as large as 900,000 b/d. The EPIC NGL-to-crude conversion that you mentioned, Amanda, is a temporary solution until the larger EPIC Pipeline comes online, which shows you how much people really want to get crude to the coast. There has been some confusion on that, so I just wanted to make that clear.

Amanda: So, there's been a lot of discussion recently about whether the US Gulf coast even has the dock infrastructure available to support all of this additional volume. You just named three major projects that are going to add an additional 1mn b/d or more, and that's just the tip of the iceberg.

Eunice: That is correct. And so in response to this, midstream companies are also expanding ports and terminals along the US Gulf coast. So, the midstream frenzy is more than just the pipelines. It's also the docks and the terminals to accommodate the growing influx of crude. I'm talking major expansions at several ports which could be the topic of an entire podcast itself. But for now, I will mention one recent announcement from Enterprise. Just as an example of the scope of what we're seeing here, the company is building an eighth dock at its terminal in the Houston Ship Channel that will add an additional 840,000 b/d of crude as well as more capacity for other products. That is just one of many expansion projects along the coast that will boost loading capacity for US crude. And this includes at least eight offshore projects that have been proposed to load very large crude carriers. So, a lot is going on in the infrastructure space.

Amanda: I'm really excited to see how this build-up ends up playing out in global markets. Most of the new production coming online is light sweet of which we're already producing too much for our US Gulf coast refining complex. The excess volume is already pushing the waterborne price of WTI below the price of WTI in the regional pipeline market. So, this indicates that sellers are just swallowing these loading prices in order to place their ease barrels. And the lower prices are ultimately supporting higher crude flows to several regions in Asia-Pacific, Europe, and Latin America. Some of the destinations we're seeing as the top buyers of US crude are India, South Korea, Taiwan, and even Chile now which would historically take from West Africa or other Latin countries.

Eunice: That is so interesting, Amanda. Thank you. Now, I know you track vessels all over the globe. Can you give us a hint as to where the current ships that are loading at the US Gulf coast right now might be heading? I know that in April, US crude was exported to 29 countries according to the latest data. Do we expect this diverse destination list to continue?

Amanda: Absolutely. So, the most interesting cargo I've seen leaving the Gulf coast lately has been a cargo heading to Odessa, Ukraine. This will be the first-ever shipment on this route. Ukraine usually takes nearby Mideast Gulf crude purchases, but those prices are a lot less economic these days compared to the falling US prices at the gulf. We expect more cargoes are going to load for Uruguay and the Dominican Republic along with several other Caribbean countries. And we're starting to see that China is increasing its US crude purchases again back to levels close to mid-2017 before we saw them take a step back from the US crude market amid the Washington and Beijing trade dispute.

Eunice: So, that brings us to the end of this podcast. Thanks, Amanda for your excellent insight and analysis. To our listeners, if you enjoyed this conversation, please check out the other five parts of this US crude infrastructure series, and if you want more information about any US crude markets including the crude export assessments we discussed today, please check out the Argus Americas Crude report.

Amanda: In looking further out, we want to let you know about the Argus Americas Crude Summit which is going to be held in Houston from February 3rd to February 5th next year. So, please check out argusmedia.com for more details. And thank you for listening. We'll be back next time with another look at the new crude market dynamic.