Learn how a commodity can, in short order, transform from being a benchmark to merely a localized marker. As a part of our 6-part series examining the US Gulf coast crude export landscape, Americas Crude Editor Gus Vasquez and Americas Crude Reporter Alex Endress discuss the evolution of Light Louisiana Sweet (LLS), which once upon a time reflected the value of the primary import market for foreign crude and offshore production.

Gus: Welcome to the podcast from Argus, a leading provider of energy and commodity price benchmarks. We track and discuss the prices that create our world. And this is one of a six-part series about the prices affected by the changing U.S. crude oil infrastructure. I'm Gus Vasquez, and I'm the editor of the Americas Crude report.

Alex: And I'm Alex Endress, crude reporter for the Americas. I cover U.S. crude market news for Argus. And as a price reporter, I assess U.S. pipeline prices with a focus on the Louisiana Gulf coast, Cushing, and U.S.-delivered Canadian heavy sour markets.

Gus: So today, we're going to be talking about the changing role of LLS as a secondary benchmark at the U.S. Gulf coast. This is important because we've gone from a world in which the U.S. was heavily dependent and imported crude to a world in which there's a huge amount of domestic production and the U.S. is actually an exporter of crude now. So when markets change, Argus also needs to change. And we're going to discuss that a little bit.

Alex: Right. And so 10 years ago, Louisiana actually served as the primary import market for foreign crude and for the delivery of offshore production. And in Louisiana and St. James, crude was blended for U.S. refinery intake. One of the grades, as Gus was talking about, LLS, or Light Louisiana Sweet, became very prolific during this time. It was blended from imported and offshore crude at St. James and delivered there via the Capline pipeline to the mid-continent. So Capline, 1.2 million barrel a day pipeline, so major artery of crude. And just to show you that, really, light sweet crude was coming from the coast to Patoka, and from there to the other mid-continent markets. So we didn't have the domestic production that we have now. We were really dependent on that imported crude, that blend of LLS.

Gus: So to understand the LLS story and how a secondary benchmark became really prominent, we have to step back a little bit, to a time when there was a large increase in Canadian production. Huge volumes of Canadian crude start coming down to Cushing, which is where West Texas Intermediate, WTI, which is the main benchmark in the U.S., is priced. So as you get this crude coming in, the problem at the time was there wasn't enough infrastructure to get the crude out fast enough. So you start to get this build of supply. And as the supply increases, the price starts to drop. 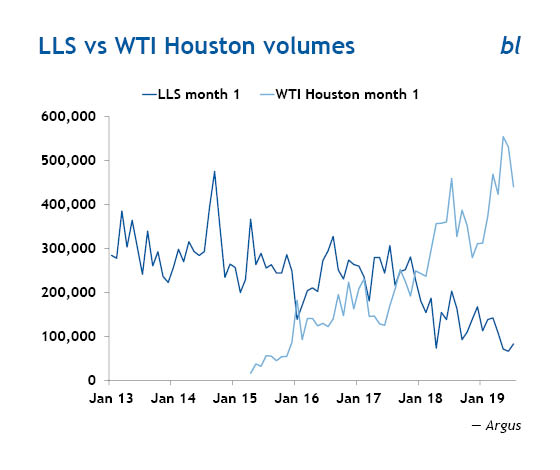 Gus: Right. ICE Brent, of course, being the global benchmark that is used for waterborne market. So when you get to that point, secondary benchmarks really come into their own because what they did was, instead of falling in line with WTI, they actually went the other way. So LLS starts to increase its premium to WTI, essentially staying in line with Brent.

Gus: Right, which basically meant that it kept its relationship to Brent fairly steady at that point. And so this immediately shows the participants in the market that secondary benchmarking is really important.

Alex: And, you know, not only do we see LLS pricing along with the ICE Brent marker, but we also see the LLS trade volumes rise to a benchmark status, or what we would consider benchmark status. So 300,000 barrels a day by 2014, and it opens up the possibility of benchmark against other similar grades.

Gus: Right. So for example, a producer of Eagle Ford in South Texas is now looking to LLS to determine the value of his barrel because he knows LLS is reflecting an international market.

Alex: If you look at that Eagle Ford, it's light sweet crude at the Texas coast. So it's really more similar to LLS, so another light sweet grade at the coast versus, you know, Cushing, which is affected by...bottlenecked. It's really pressured by those volumes that are just kinda sitting there without any where to go.

Gus: And then you've got the hedging part of the equation as well, right?

Alex: Yeah, absolutely. So companies are actually able to hedge not only their basis price risk, as in WTI at Cushing, but also any part of the differential risks of whatever crude that they're supplying, that may actually be more similar to the coastal marker versus the inland Cushing marker.

Gus: So when we thought about this basis price risk, we're talking WTI at Cushing. Now, we know that, since the disconnect, since the inversion, WTI has now recovered because more infrastructure was essentially built to take crude out of Cushing. And so now, that story kinda has settled down. But at the same time, there's this parallel story going on in West Texas, because you've got the Permian producing increasing amounts of crude. Now, as more crude comes online, it starts to travel to new places. The main place, instead of Cushing, becomes Houston. So now, you've got WTI production from West Texas moving into Houston. This creates immediately a spot market that's pretty active. And by February of 2015, Argus launches its WTI Houston assessment.

Alex: Yeah. Just later that year, actually, the U.S. crude export ban was lifted. And that had been in place since 1977.

Gus: So that adds a whole new side to the story because at that point, WTI Houston really starts to look like a secondary benchmark in and of itself. And people really start to use it because when you look at, you see that you've got a lot of supply, a growing supply, in fact, so you know, it's going to be around for a long time. Because there's a lot of refineries in Houston, you've got a lot of buyers and sellers that are in the market. You have access to the water, which means that you could take advantage of the opportunity to export that excess now. And the quality is guaranteed because Magellan East Houston, which is a terminal where the barrels are being traded, guarantees quality not only in storage, but even through the pipelines coming into Houston.

Alex: And the same changes in production that prompted the need for the WTI Houston assessment also affect LLS in the market for light sweet crude in Louisiana. Because as we see all of this domestic production come online, that really reduces the need for that imported crude. So the import arbitrage is less favorable. And shale crude actually begins flowing into St. James. So, for instance, the HO-HO pipeline, it's 375,000 barrels a day, once flowed from Louisiana to Texas. But it's reversed. So transporting crude from Texas to Louisiana, it's renamed Zydeco. And not only that, but the Capline connection that we talked about earlier, 1.2 million barrels a day from Louisiana to the mid-continent, actually the flow has dropped down to as little as 16,000 barrels a day just as recent as last August.

Gus: Which is completely underutilized at that point.

Alex: Yeah, yeah, absolutely. And, you know, part of that is because of the WTI inversion that Gus mentioned earlier.

Gus: Right. So getting the barrels out of Cushing.

Alex: Right. So what happened during that time is the Diamond crude line was one of the lines that was built to service the need of the oversupply. And so that was built from Cushing to Memphis, Tennessee, really undercutting the need for that Capline light sweet supply from the U.S. Gulf Coast. And so in the second half of 2017, as we see more shale crude kind of encroach on LLS, WTI Houston liquidity actually outpaces LLS in the spot market for the first time. And by 2019, WTI Houston liquidity exceeds 450,000 barrels a day. So that's versus LLS volumes, which have kind of dwindled down to roughly 100,000 barrels a day.

Gus: So LLS volumes go down, but that doesn't mean that the market goes away. In fact, the LLS market is evolving. And we've seen that. This is important because LLS is still a reliable benchmark that can be used in Louisiana. Refiners still run the crude in Louisiana. So there's a place for LLS in this world. And what changes, though, is that because there is no volume going out the Capline, trade starts to happen in other terminals around the St. James area.

At that point, Argus looks at the situation, because we're getting all these transactions being reported to us at locations outside of the Capline terminal. We do what we always do in these situations, which is we go to the industry and we ask for their input, "Should we change the methodology? Do you guys want us to capture these new trading hubs?" And the answer is yes. So we went ahead and we changed our methodology. So now our LLS assessment looks different than it did even last year.

Alex: And the story of LLS really is not over and away. It's just getting more interesting because as more shale crude pours into Louisiana, refiners are going to have to make that decision. Do they blend it into the LLS specification or do they just decide to run Bakken, or run Eagle Ford, or whatever it is that's coming into Louisiana? We're going to have more pipelines come online, and even the Capline pipeline potentially could still be reversed. But that remains to be seen.

Gus: Yep. And unfortunately, that's about all the time we have. That was a lot to cover. So thank you, Alex, for that. I think it was very interesting. It's a really kind of cool story in LLS and how things have changed over the years. If you enjoyed this podcast, I would remind you that there are another five parts of this series that you can also listen to. If you want further information about U.S. crude markets, LLS, including any daily prices, you can check out our Argus Crude or Argus Americas Crude reports.

Alex: And there's also a date set for the next Argus Americas Crude Summit, which will be in Houston, Texas, February 3rd through the 5th of 2020. Check out argusmedia.com for details. Thanks for listening. We'll be back next time with another look into one of the prices that create our world.