Chinese demand has supported global commodity markets in a year when end-user demand worldwide has been ravaged by Covid-19. Opportunistic stockpiling amid low spot prices played a role, but so too China’s broader economic recovery post-Covid, ahead of other countries. Cyclical, structural and policy-driven changes may reshape trends for 2021 and beyond.

China has a head start on the rest of the world regarding economic recovery. November factory output was up 7% vs. 2019, with manufacturing and services PMIs also comfortably in expansionary territory. 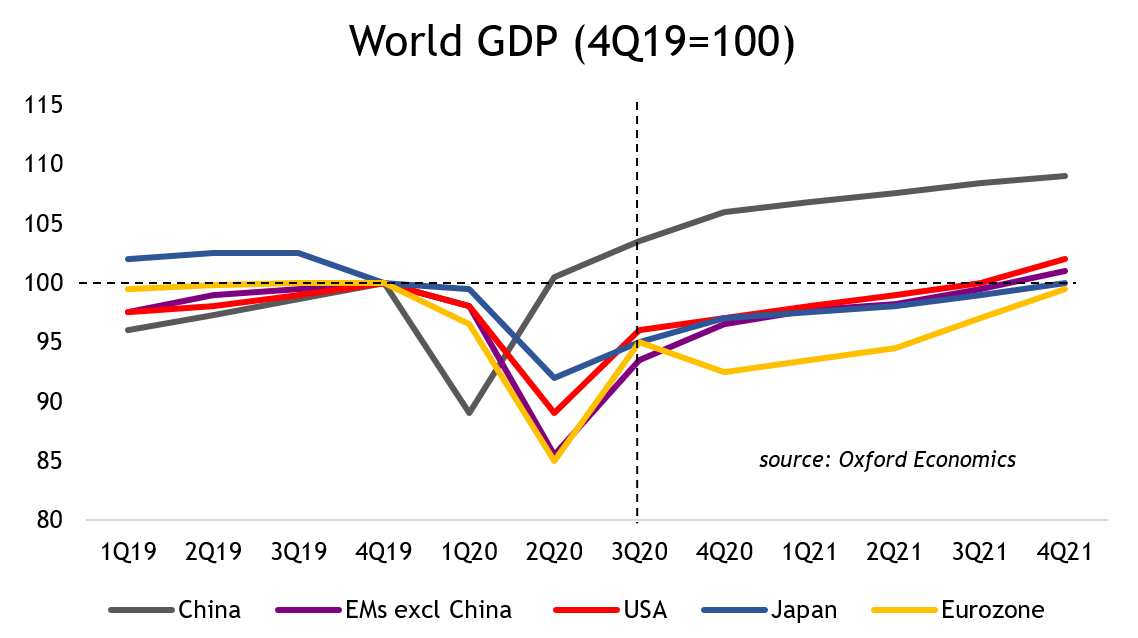 4Q20 Chinese GDP growth is estimated at +5.5% y-o-y, close to pre-crisis levels. China endured peak Covid-19 impacts in 1Q20, whereas the major hit on other economies came later, in 2Q20. While China has already regained end-2019 absolute GDP levels, other economies might not do so until 2H21 (see Oxford Economics estimates, above).

Moreover, this has been achieved while China’s movement and activity restrictions have remained more stringent than elsewhere, yet since March China’s reported daily new Covid caseload has remained below 100.

Even allowing for the vagaries of testing and potential under-reporting, this compares favourably to the US, where daily caseload has swung between 2,000 and current near-200,000 levels.

Arguably, Chinese control measures have been both more proactively applied and more rigorously respected than some of those in the west, enabling this sharper economic recovery.

All told, China’s policy response to the pandemic has been distinct from that of some western governments, where the tendency has been to:


In contrast, China’s monetary and fiscal stimulus has been cautious, with the retention of higher interest rates ultimately encouraging an inflow of foreign investment funding. Not surprisingly, this led to Rmb appreciation vs. the USD, a trend likely to continue into 2021. With strong 2021 economic fundamentals and continued currency strength, China’s total imports could stay robust next year, notwithstanding a continued trade surplus.

Structural change may dampen this pull on imports however. While China’s fiscal stimulus has lagged western levels in 2020, it has nonetheless fuelled strong state infrastructure spend and construction activity in the period since 1Q20.

With government likely to rein-in stimulus spending in 2021, and to slow credit growth, demand for construction-related commodities could ease.

Next year growth is expected to re-orientate from infrastructure and towards corporate investment and consumer spending (with improving employment and a drawdown in household savings accumulated in 2020). This could partially offset the stronger Rmb, albeit impacts will vary between commodities.

While imports of construction materials may ease, oil and gas imports could rise further in 2021 and beyond. Not least as China is expected to add another two to three million b/d of new refining capacity by mid-decade, much of it linked to petrochemical production.

Crude storage expansion also continues apace, with reports suggesting around 165 mb of new commercial tanks due for completion between 4Q20 and 4Q22.

In the petrochemical sphere too, Argus Consulting estimates China could add over 20 million tons of new ethylene cracking capacity between 2020-2025 (equivalent to 10% of current global capacity), largely fed by naphtha. LPG demand into petrochemicals could also double by 2025.

China now vies with Japan as the world’s largest LNG importer, with monthly purchases in 2020 of over 5 million tons. And while imports by Asia’s top five purchasers have risen 6% so far in 2020, deliveries into China are up by a steeper 12%. 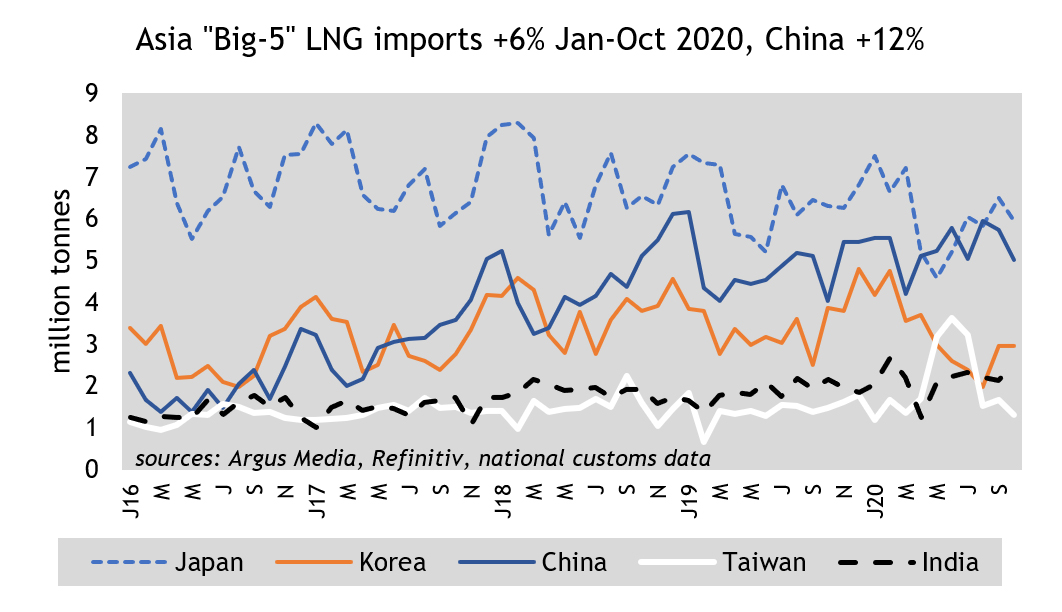 Despite a recent recovery in Asian spot LNG prices, overall expectations are for an amply supplied global LNG market through mid-decade. Much will depend on liberalisation of China’s domestic gas market, and the extent to which China’s ambitious climate pledges drive a restructuring of power generation capacity.

However, further switching to gas from coal in domestic, industrial and power applications could see ongoing strong growth in China’s LNG import demand.

China’s 14th Five Year Plan (FYP), due to be published in 1Q21, will continue the country’s shift towards slower but higher-quality economic growth, with a rising share for domestic consumer demand in the economy.

Any GDP growth target is likely to come in below the prior 6.5% goal, even if 2021 growth may temporarily rebound to near 8% after the subdued 2% of 2020. The principle of state-led development is however likely to remain sacrosanct.

More recently, the government has pivoted towards “dual circulation”, combining an existing drive towards market liberalisation and international investment, with greater self-sufficiency in energy and commodity supply and high technology manufacture.

The perception of increasing international geopolitical pressure on China has embedded a goal of boosting self-reliance alongside long-standing growth and economic restructuring objectives.

The Plan will likely deepen reform of the Hukou system, land ownership and the financial sector. Some suggest also potential reforms of the major State-Owned Enterprises (SOEs), potentially shaking up domestic energy and commodity markets in the process.

Preliminary policy guidelines are expected to back up President Xi’s September pledge that China will “strive to reach” peak CO2 emissions before 2030 and carbon neutrality by 2060.

While in part a political pronouncement designed to burnish China’s internationalist credentials in contrast to an increasingly isolationist USA under President Trump, the pledge also signals Beijing’s determination to accelerate the move towards clean air and environmental improvement.

There is clear synergy here too with objectives for technological development, and greater energy self-sufficiency. Many expect further support for electric vehicle (EV) adoption and related infrastructure investment, plus an ambitious programme for high-speed rail.

More concretely, Xi pledged at the UN Climate Summit in early December to treble domestic solar and wind power capacity to 1200 MW by 2030. These moves imply major upgrades for the domestic power grid.

Moreover, the shift to EVs and greater reliance on domestic rail vs. air transport may ultimately start to weigh on gasoline, diesel and jet fuel demand.

Few however expect the FYP to undermine the short-to-medium term coal market in China, given coal mining and thermal power generation’s importance to employment and local government finances.

China has an existing 1,000 GW coal-fired fleet, with another 250 GW under construction or planned. A simmering diplomatic dispute since mid-2020 has seen a slump in Australian (and total) coal imports.

Ultimately, coal’s dominance in China’s power sector will be diluted if climate pledges are to be met, albeit in a gradual manner, involving CCUS deployment to enable continued coal-burn while also reducing emissions. 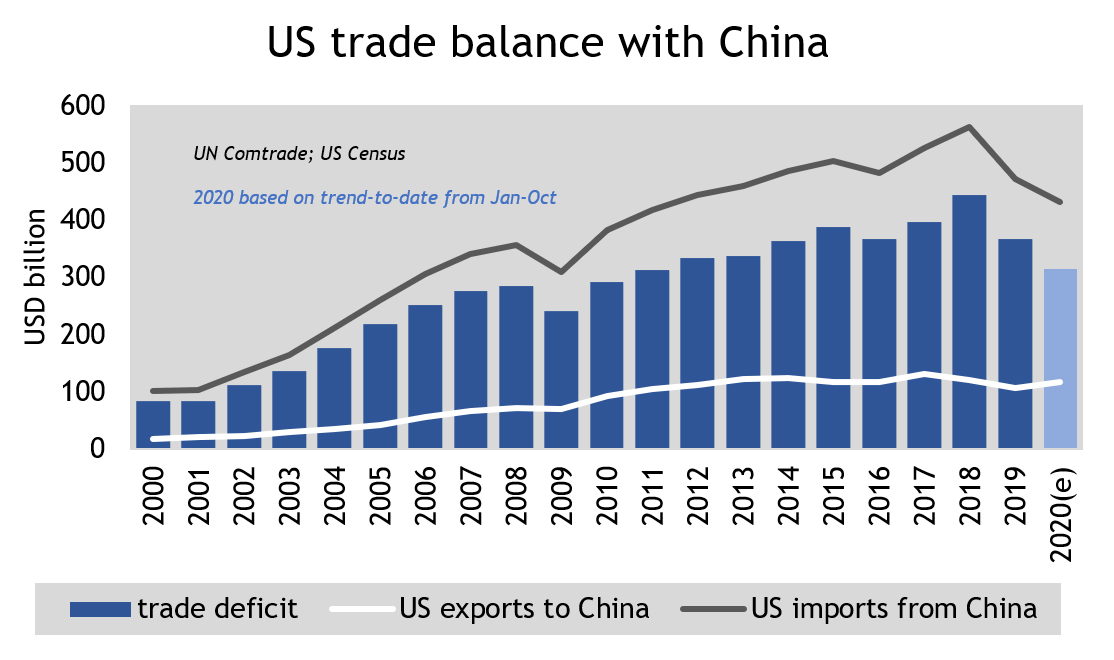 Diplomatically besieged on several fronts, it is no surprise that China’s policy thrust now prioritises self-sufficiency, particularly in the related spheres of energy supply and high technology manufacturing.

The new Biden Administration in Washington may herald more predictable relations with Beijing, but the incoming President is unlikely to materially soften trade relations between the two countries short-term.

Year-to-date in 2020 the US trade deficit with China has shrunk close to 2011 levels, largely due to weak US demand amid Covid-19. Notwithstanding, through October 2020 Chinese imports of US goods stood at around 55% of levels agreed under the phase-one trade deal of late-2019, while energy imports were around 34% of pledged levels.

US oil and gas exports to China may rise further, subject to favourable arbitrage economics, but seem unlikely to match the highly ambitious levels of the 2019 trade agreement anytime soon.

Another seemingly compromised strand of China’s international policy is President Xi’s signature Belt and Road Initiative (BRI), which aimed for $1 trillion of Chinese state bank loans to fund infrastructure investment in a swath of developing economies.

The goal was to develop economic inter-dependence between China and recipient countries but concerns over debt sustainability have ballooned, project delays have magnified and annual overseas lending by China’s two main policy banks has fallen, from an average around $50 billion during 2010-2017 to barely $4 billion in 2019.

The domestic component of the “dual circulation” policy now appears to be in the ascendency, while China continues to renegotiate repayment schedules with debtor nations in Asia, Africa and Latin America. 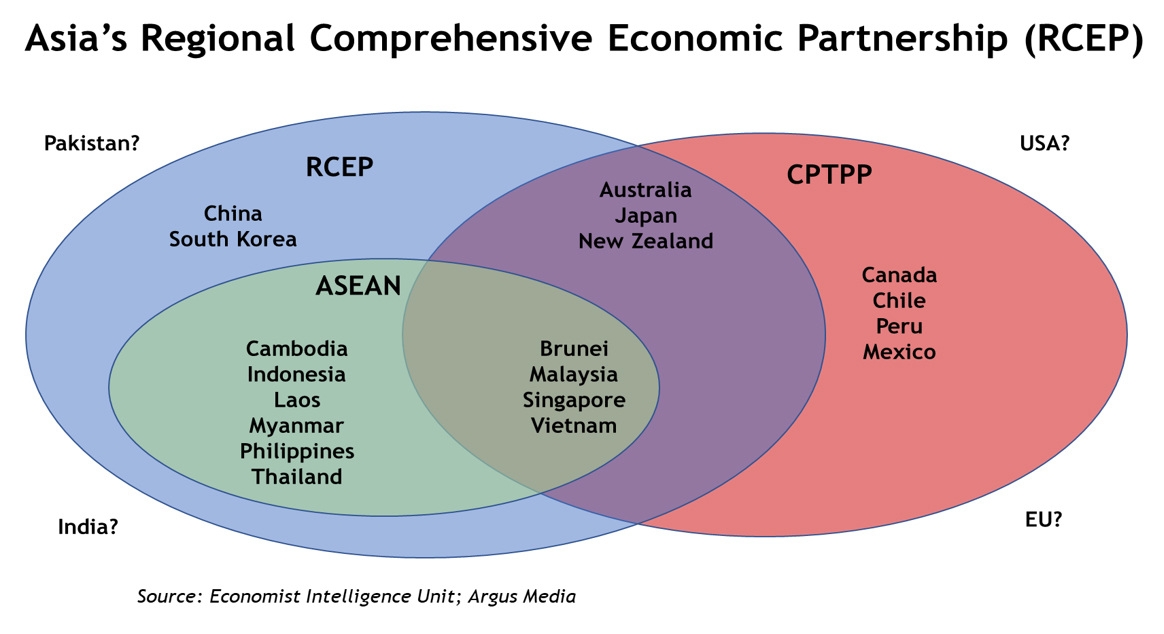 However, China did boost its multilateralist credentials in November, signing the Regional Comprehensive Economic Partnership (RCEP) with 14 other Asian nations, paving the way for friction-free trade among a group representing 30% of the world’s population and GDP and 26% of global trade.

The likely impact of this on global commodity markets is not yet clear, since ratification will take several years, agriculture is excluded and as RCEP will essentially replace several existing bilateral FTAs between participants.

Moreover, neither India or Pakistan are signatories, and ongoing RCEP negotiations must also navigate some presently strained regional relationships over BRI debt issues and China’s territorial claims in the South and East China Seas.

However, the deal does represent a first step towards free trade between China, Japan and Korea. Should RCEP eventually draw the US, EU and others into more proactive trade engagement with Asia, some estimate the global economy could benefit by up to $186 billion by 2030 – with positive implications too for commodity trade.

From the Economist's Chair: Back towards the sweet spot?

Sentiment may be shifting to the upside for a US shale sector that recently took a standing count, but is it premature to herald fledgling recovery for a sector battered by collapsing demand, slumping prices, capital starvation, bankruptcies and an incoming Biden Admini...

From the Economist's Chair: US election fog could intensify crude’s roller coaster

Intra-day crude volatility has doubled since early-September, on renewed uncertainty over Opec+ intentions, recovering Libyan production, weakening oil demand amid resurgent Covid-19 and, not least, a fractious US Presidential and Senate election campaign, which may see...