When Kuala Lumpur announced in June a halt to recruitment of foreign nationals until the end of 2020, plantations were quick to seek an exemption. Malaysia’s palm oil board (MPOB) warned the industry could lose billions of ringgit in revenue and up to 25pc in output from last year’s 19.9mn t, as well as up to 62,000 harvesters because of the restrictions. Kuala Lumpur may face a backlash if it tries to prematurely resume cross-border hiring to save plantations’ bottom lines, after plantation labour abuse allegations resurfaced last week. Will this be the moment the rules change for an industry indebted to foreign workers?

Malaysia relied on cheap foreign labour to industrialise its plantation economy from the 1990s, when it commercialised traditional migration flows through porous border regions with Indonesia. Locals were largely uninterested in manning expanding estates, having already been roused to aspire for urban over rural jobs since the country’s New Economic Policy of 1971.

Currently around 80-85pc of the plantation workforce is made up of documented foreigners, amounting to more than 265,000 mainly Indonesians, Filipinos and Bangladeshis, according to MPOB data. Rights groups estimate many more opt to migrate illegally to circumvent lengthy formal admission procedures, although numbers are hard to estimate.

The system of hiring at a discount overseas has worked well for both industry and the government, allowing plantations to minimise costs and maximise returns, while inflating tax receipts. The crop accounted for almost 3pc of total GDP or around $10.8bn in 2018, the last year for which data is available from Malaysia’s statistics department and when spot crude palm oil (CPO) averaged 13pc lower than in 2020 to date, at 2,235 ringgit/t ($538/t).

But even before the global pandemic threw this system off kilter, its sustainability had long been doubtful. The industry was already short of around 31,000 workers before the pandemic, according to the MPOB. Fewer Indonesians, who comprise most of the foreign workforce, have been flocking to Malaysian plantations as prospects and wages increased at home. And overseas hiring practices have come under repeated scrutiny after numerous reports highlighted foreign workers’ heightened risk of exploitation in the plantation economy. 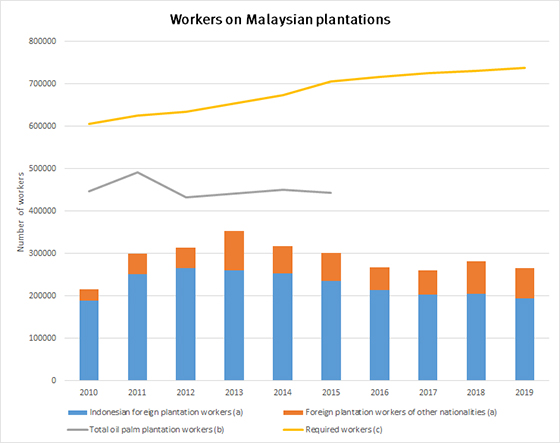 Sources & data:
(a) Malaysian Department of Immigration and Ministry of Plantation Industries & Commodities (MPIC)
(b) Malaysian Palm Oil Board (MPOB)

The government had already been prioritising localisation. It aimed to limit foreigners to 15pc of the total workforce across the board by 2020 in the Eleventh Malaysia Plan 2016-20, regulated through charging employers a levy per foreign worker hired of up to 640 ringgit in the plantation sector. Malaysia’s 2020 budget also offered a 350-500 ringgit/month wage incentive for native low-skilled workers hired to replace a foreigner, as well as a 250 ringgit/month local hiring incentive for employers.

But the Covid-19 crisis and freeze on overseas hiring laid bare the industry’s reliance on foreign workers for all the world to see. The government justified its response on the grounds of boosting job opportunities for locals because of a poor job market, as well as simply stopping the pandemic’s physical spread with migrants at the border. And it has stood firm so far despite cries from plantations painting the freeze as an existential threat.

The human resources ministry will re-evaluate hiring restrictions at the end of the year, with job prospects for Malaysians a key criteria, according to department minister M Saravanan. Many market stakeholders see little chance that overseas hiring will return in full force even in 2021, given the government’s approach so far, persistent risks from Covid-19 and a bleak economic outlook.

So how can they keep producing?

The situation has spurred investments in mechanisation, but these promise no short-term relief, as the human harvesters that make up the bulk of foreign hires are also notoriously hard to replace. The labour crunch has also boosted support for employing paroled prisoners, taking inspiration from a small collaboration between Sime Darby Plantation and Malaysia’s prison department that has been continuing since 2018. But this avenue seems unwise for an industry already in the spotlight because of forced labour allegations.

Last week added a new case to the list of worker abuse accusations against the industry, when the US banned imports from Malaysian palm oil producer FGV after a probe revealed labour malpractices on its plantations.

The only workable option remains to fill positions domestically, but producers are not trying hard enough to compete for labour in the open market, says the executive secretary for the plantation workers’ national union A Navamukundan. Plantations have largely blamed Malaysian job seekers for refusing to take up field work they reportedly shun as “dirty, dangerous and difficult”. But systematic devaluing of the work is likely the main factor keeping locals away.

Malaysian palm oil has typically struggled to compete with its Indonesian counterpart on a cost-for-cost basis to find buyers in key regional markets India and China. Malaysia’s MPOB domestic spot CPO in this year’s third quarter to 25 September averaged $656/t or $55/t higher than Indonesia’s KPBN tender price delivered to the ports of Belawan, Dumai or Medan. 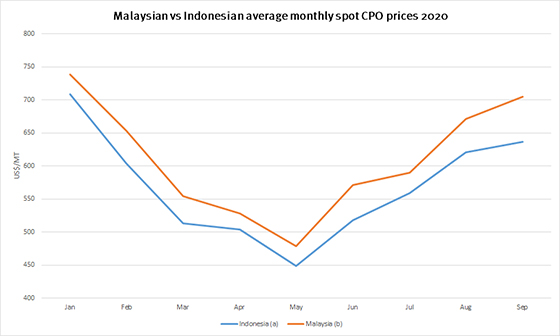 Contrasting duty adjustments have gone some way to close the gap in the short term. Kuala Lumpur froze CPO export duties until the end of the year to aid its post-pandemic recovery, while Jakarta is planning another hike above the current $55/t flat rate to try to shore up the dwindling coffers of its B30 biodiesel blending programme.

Increased sustainability credentials in the long term may provide its palm oil an enduring competitive advantage over Indonesian product, by securing access into increasingly sustainability conscious US and EU markets. Malaysia has already been pushing this strategy, to the result that more than 96pc of large palm oil estates, or 4.06mn hectares (ha) of planted land, were certified under its Malaysian Sustainable Palm Oil as of June this year, while almost 21pc or 1.3mn ha of Malaysian plantations are under the largest global scheme, the Roundtable on Sustainable Palm Oil (RSPO).

The updated 2018 RSPO broadened focus beyond environmental sustainability to require a “decent living wage” for workers, or “sufficient to afford a decent standard of living for the worker and their family”, as well as other labour protections. Achieving these standards will raise costs but should also facilitate expansion in developed markets.

But sustainability certification efforts have not stopped EU plans to phase out palm oil as a biofuels feedstock, deeming its cultivation a deforestation risk. Once the second Renewable Energy Directive (RED II) fully kicks in next June, biofuels considered at a high risk of indirect land use change can comprise 7pc of total transport fuels until 2030 and will then be banned completely.

There is no doubt that mounting palm oil production costs will increase strain on Malaysia’s biodiesel blending programme, which the government ramped up in response to the EU’s phase out plans under RED II and subsidies through funds from CPO export taxes and fossil diesel sales.

Prompt feedstock palm olein costs rallied by $183.75/t in the third quarter to reach $778.75/t on 21 September, although there has since been some downwards adjustment. This was the highest price since reaching $792.50/t on 9 January and three years before that. Higher costs deterred international buyers and halted overseas sales ahead of the usual northern hemisphere winter lull.

Domestic palm oil demand should increase by over 530,000t to reach 1.06mn t/yr once the 20pc blended biodiesel (B20) mandate has been rolled out nationwide next year. By contrast, Malaysia exported 1.85mn t of palm oil and its factions to the EU 27 throughout 2019.

This moment may invigorate efforts to localise Malaysia’s plantation workforce, recast hiring practices in line with a sustainability drive or become increasingly insular. Whatever the outcome, the pandemic has prompted a re-examination of the way the industry has operated for decades.

Market Talks: Outlook for a new biodiesel commercialisation model for the Brazilian market

The Brazilian biodiesel commercialisation model through public auctions is beginning to show wearing-out signs, and despite the reduction in the blending mandate, uncertainties around supply put this mechanism in check.

Driving Discussions: How do renewable feedstocks play a role in your biofuels strategy?

Renewable fuels and their importance in the market have seen an uptick this year.

Petrobras’ recent clean fuels tenders priced off Nymex RBOB and ULSD contracts are one of the many signs of an ongoing transformation of Brazil’s downstream sector towards an open and thriving market.