To support its booming steel output, China’s only viable option for more iron ore is Brazil, which will serve to support Capesize rates and tonne-mile demand.

China’s iron ore imports will need to rise in 2021 to support its growing steel production, while tightness is expected to remain in the global market. It will probably maintain or even expand its already significant share of long-distance Brazilian exports as a result, which should support Capesize tonne-mile demand and freight rates.

What is more, the prospect of a relatively slow pick-up in global iron ore supply is expected to keep the market tightly balanced, which should support prices and make long-distance journeys and higher freight costs more viable.

As the world’s largest iron ore importer, China received a record 1.17bn t last year, according to preliminary customs data. Its steel production is expected to rise by another 50mn t in 2021, which will require approximately 80mn t more iron ore, either from imports or ferrous scrap.

China’s 2020 imports included a sharp jump in its share of exports from Brazil, the world’s second-largest iron ore producer. It received 72pc of Brazil’s exports in 2020, up from 62pc in 2019. This raised the tonne-mile contribution of Brazilian iron ore to the global dry bulk market, because China is essentially the longest possible journey from the country. Ships are employed for nearly three months for a round trip on the route.

China took market share from almost every other Brazilian export partner in 2020, including other long-haul Asian buyers. But the largest shift in trade flows came from a drop in volumes travelling on the relatively short route to Europe:

The shift in trade flows meant that the tonne-mile contribution of Brazilian iron ore exports to the global dry bulk shipping market rose by 2pc on the year in 2020, despite total exports falling to a seven-year low of 341mn t. This was 2.7pc lower than 2019 and 12.5pc lower than 2018. The Brazil-China iron ore route is often considered the key driver of rates for Capesize vessels, which are commonly employed on the route. A pick-up in tonne-miles could be a strong supporting factor for the global market.

Brazilian exports are expected to be higher in total in 2021 than in 2020. Major producer Vale’s forecast of 5-10pc year-on-year production growth was seen as conservative, and a negative sign for the Capesize market by some market participants, particularly since it was barely higher than the initial 2020 guidance that Vale did not achieve. But if China retains its higher market share, tonne-miles could head towards or even exceed 2018 levels. 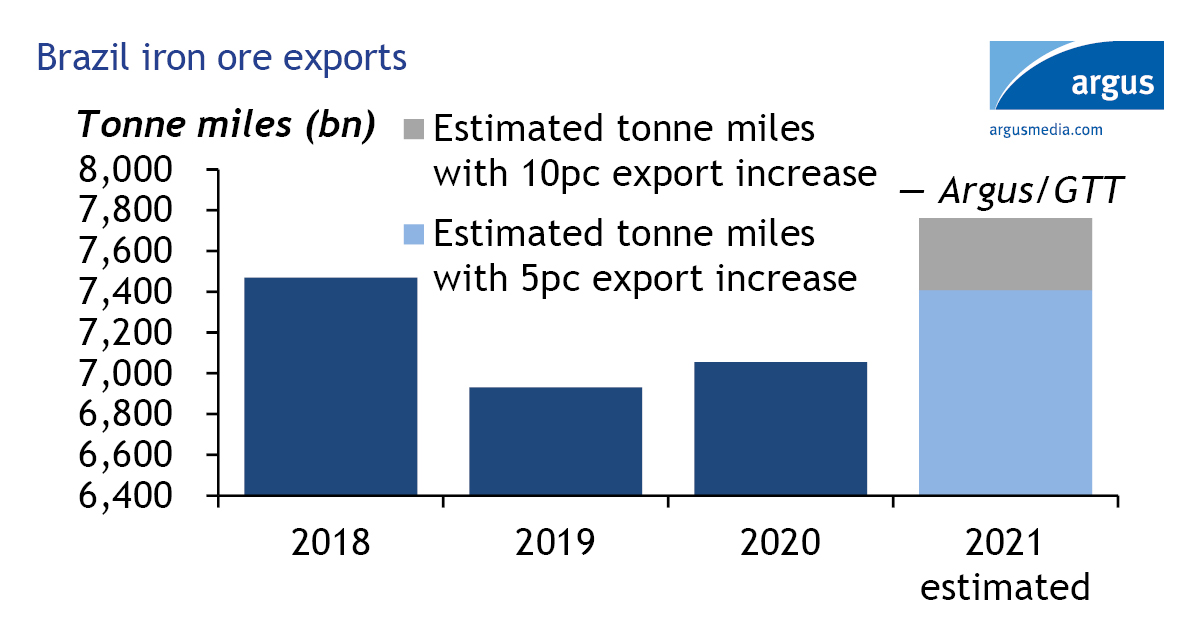 Charterers have to pay more for freight on the long-distance voyage from Brazil, compared with China’s other major iron supplier, Australia. But nine-year highs for mainstream 62pc Fe basis iron ore prices, coupled with the prospect of a relatively slow climb in global iron ore supply that is expected to keep the market tightly balanced, will make longer journeys with greater costs more viable.

The impact of the higher iron ore price is already clear. The average rate on the Tubarao-Qingdao route is $18.63/t for January 2021, 7.4pc higher than January 2020. But this is just 11pc of the average ICX 62pc Fe cfr Qingdao import price, whereas the freight rate was equal to 18.7pc of the ICX price in January 2020, and 21.8pc in January 2019. The lower Weight of Freight means a more attractive backdrop for charterers, encouraging further activity in the market.

China will probably need to maintain a higher share of Brazilian exports in 2021 to raise its imports compared with 2020, as its other sourcing options are somewhat limited. Australia, the biggest iron ore seaborne supplier in the world, is focused more on maintaining current output levels than expanding. And China is already maximising output from Australia — its closest, and cheapest, trading neighbour — taking over 80pc of its output in 2019 and 2020.

Significantly increasing imports from non-mainstream suppliers is likely to be tough too. For example, South African iron ore amounts to 4pc of China’s imports, but its production has been hampered by issues related to the Covid-19 pandemic. And India, accounting for 3pc, ships mainly low grade Fe fines volumes, while its pellet exports have slowed as they are being primarily retained for domestic use.

All eyes on Brazil

China will need more iron ore to support its growing steel industry. Considering that large-scale import expansions from Australian and non-mainstream sources look unfeasible, and increased scrapping is unlikely to plug the supply gap, the stage is set for China’s share of Brazilian iron ore exports to remain high or even grow further in 2021. Greater activity on the second-busiest Capesize iron ore route should support tonne-mile demand and buoy rates globally.


The Weight of Freight