For much of the third quarter, Chinese buyers have remained restrained on sulphur imports and opted to concentrate consumption on existing port inventory and increasing domestic production.

Import buying has been described as hand-to-mouth, despite the healthy margins for fertilizer producers exporting end products. Chinese refineries were producing sulphur at high rates for much of the second quarter, and additional tonnes were readily available from stocks warehoused at ports. This meant that the Chinese cfr levels lagged, unusually, well below competing markets during July and into August. However, by mid-August the balance had altered, when Chinese cfr levels again overtook competing markets.

Tracking the daily price in China over August 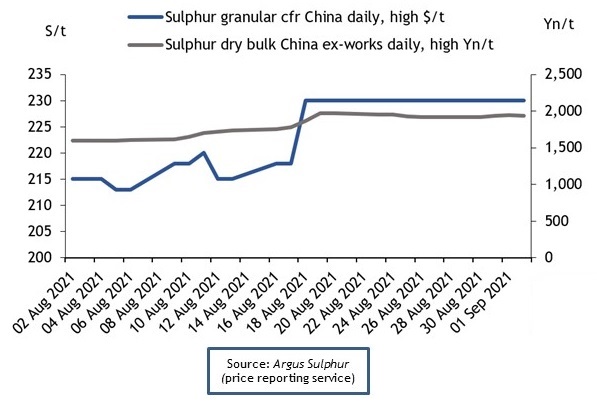 Looking at daily pricing in the Chinese market during the second half of August, it is evident that the domestic pricing for port stock increased rapidly, and while the paper market can play a part in exaggerating this movement, there were physical actors at play. As a result of a new wave of Covid-19, renewed pandemic control measures began to cause congestion at river ports. This had the impact of raising additional demurrage costs for buyers and causing delays in getting the product to plants. This caused port stock levels to drop to 1.53mn t by the last week of August, and procuring domestic product became more challenging, with maintenance rounds restricting output from domestic refineries and existing port stock held by a limited number of trading companies.

Cfr price direction over July and August in key markets 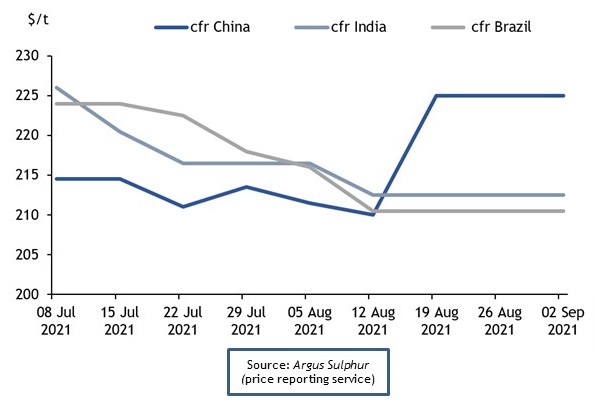 Port delays — at river ports in particular — had become significant by early September, and despite offer levels reaching $245-255/t cfr, the substantial demurrage costs incurred as a result of berthing bottlenecks was stalling new conclusions. The pandemic control measures and a lack of pilots to steer vessels to port were behind the delays. Additional costs were reported from $15-20/t to as much as $34/t on sulphur shipments. Buyers began requesting contracts to be agreed on CQD (Customary Quick despatch) terms. This would mean that the charterer loads and discharges as quickly as possible, with no provision for demurrage. Sellers were reluctant to agree to such terms and risk potentially severe delays removing margins on sulphur sales.

This dynamic was a significant factor driving price firming in the run-up to the negotiations for global supply contracts for the fourth quarter.