The Russia-Ukraine crisis is above all a humanitarian tragedy but has also augmented commodity price inflation as the world comes to terms with actual and threatened supply disruptions. Markets, as always, will adjust via shifts in pricing and arbitrage. However, focus could ultimately seep from the current supply-side concerns, and more towards the demand side, as global economic growth takes a hit from a combination of worsening supply chain bottlenecks, inflationary pressures, rising interest rates and a stronger US dollar.

Six weeks on from the start of the Russia-Ukraine crisis, commodity prices have subsided from their initial spikes, although oil, gas, wheat and nickel futures remain 20-50% above pre-crisis levels and show no sign of regaining lower pre-crisis levels in the near future. Russia accounts for over 10% of globally traded oil and timber supplies, some 15%-20% of world coal, palladium and corn exports (the latter in conjunction with Ukraine), around 25% of traded natural gas, fertilizers and wheat (again, with Ukraine) and 35% of globally traded nickel. 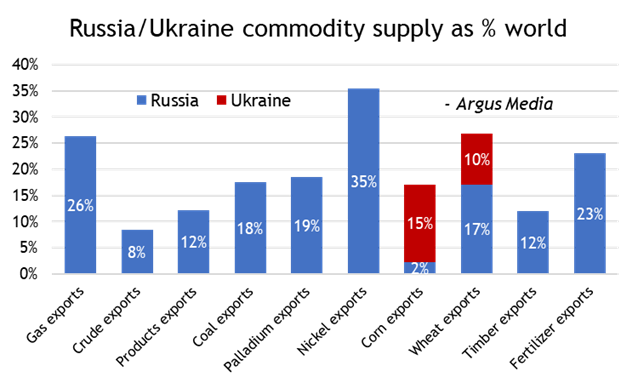 From early on in the crisis, US, European and allied governments have progressively tightened economic pressure on Russia via financial and logistical sanctions. Some commodity market participants are now actively avoiding transactions involving Russian supplies, while the conflict has also substantially raised shipping, insurance and hedging costs.

Russian military focus appears for now to have shifted from broader regime change in Ukraine to a narrower concentration on bolstering separatist control of the Donbas region of eastern Ukraine. Arguably this reinforces expectations of a long-duration political stand-off between Russia and western powers, during which the US, Europe and their allies progressively tighten financial and economic sanctions on Russia.

To date, there are no outright European sanctions on oil and gas flows out of Russia, although European governments will reportedly take steps to lessen dependence on Russian energy and commodity flows over the next 12-18 months. The US has banned imports of Russian energy, being traditionally less dependent on Russian supplies than Europe, with the exception of cracker feedstock flows.

Russia’s role as supplier of 26% of globally traded natural gas has seen that fuel experience the greatest price volatility. European spot prices briefly surged above $65/mmbtu in early-March but are now trading within a $30-$35/mmbtu range, near parity with Asian spot LNG values. Mild late-winter European weather has allowed some easing in a precariously tight European gas inventory situation, but concerns persist over summer 2022 replenishment if Russian supplies are curtailed.

Given Europe’s dependence on Russian pipeline gas for around 50% of its total imports, this was always likely to be the last commodity on the list for outright EU sanctions. However, Russia’s insistence that payments for contract supplies from late-April onwards have to be made in Roubles has further alienated European buyers. The EU has set a goal to displace 100 bcm of Russian gas imports (50% of 2021 purchases) with alternative supplies and demand management measures by end-2022.

The EU plan envisages 60% of this displacement occurring via LNG and pipeline supplies from non-Russia sources, a level seen as highly ambitious given logistical and import infrastructure constraints. Moreover, attracting up to 60 bcm of incremental LNG from the US, Middle East or Asia implies European prices moving substantially above those in Asia to ensure arbitrage flows.

Oil is more fungible, and global markets less dependent on Russian oil, than is the case for gas, so price spikes have been correspondingly less pronounced. Nonetheless, persistent $100-plus crude is clearly exacerbating a cost of living crisis in consuming countries. Russia in 2021 exported 1.35 mb/d of refined petroleum products to Europe, some 45% of its total products exports and 21% of Europe’s imported supplies. Diesel, residue/feedstocks and naphtha are the key products, with just under 1 mb/d of diesel and vacuum gasoil combined heading from Russian ports into Europe. 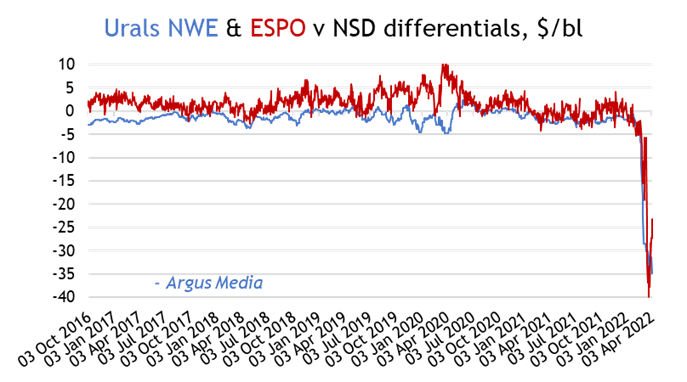 In the event of future outright sanctions, replacing diesel supplies in the net-short European refining area would be a key challenge. Refiners would potentially have to seek replacement supplies from the US, Middle East or Asia. Argus recently initiated a price assessment for diesel of non-Russian origin to cater for market participants seeking to avoid Russian-sourced material. However, many buyers currently remain prepared to accept Russian cargoes, so premia for non-Russian gasoil have traded within $10-$20/tonne of Russian supply. Those premia could widen if buyer sentiment shifts away from Russian supply.

Discounts for Russian crude are wider, with Urals and ESPO grades assessed at $25-$35/bl below benchmark North Sea Dated in recent weeks. Spot trade has become difficult to capture as buyers become increasingly reticent about being seen to transact Russian cargoes. Of total Russian crude exports of 5 mb/d, some 1.5-2 mb/d can be considered as either spot, seaborne or discretionary supply.

If largely European buyers of this material either self-sanction or eventually face outright government sanctions, this volume would either arbitrage out of Europe into Asia, or would be shut-in and require replacement with alternative supplies drawn from Opec+, Iran, US shale, strategic stockpiles or a combination of all four. In the case of Russian barrels arbitraged east to India or China, these could displace Middle East, West African or Latin American supplies that would need to find a home in the Atlantic Basin. It is clear therefore that for natural gas, refined products and crude alike – as for other commodities – the Ukraine crisis will fundamentally shift traditional trade flows.

We noted in the last issue how liquidity providers – Opec+ Ministers and Central Bankers alike – were grappling with unprecedented uncertainty and market volatility. Events since Russian forces crossed into Ukraine on 24 February have only exacerbated many of those pressures. Opec+ seems unable or unwilling to accelerate the unwinding of its pandemic production cuts, immobilised by a combination of macro/oil demand uncertainty, tensions with oil consuming nations and a likely desire to keep Russia within the framework of the Opec+ agreement. 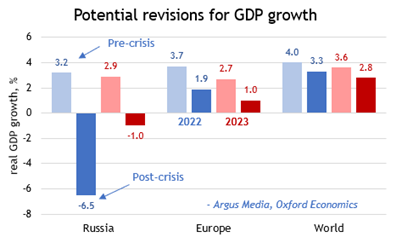 For its part, the US Federal Reserve is scrambling to combat spiralling inflation with accelerated monetary policy tightening. A resultant strengthening of the USD represents a double-whammy for energy importers, as a 75% increase in USD crude import costs during the 12 months to March 2022 translates into 80% to 90% cost increases in national currency terms for India, Japan and the EU, while Turkey is paying three times as much for crude imports in Lira terms as it was a year ago.

Aside from Russia and Ukraine, whose economies will be decimated by the conflict, the European economy faces the biggest hit, with base case GDP growth cut by a preliminary 50-60% from pre-crisis levels for 2022 and 2023. Hitherto, the US and China have been seen to be partly insulated from the worst spill-over impacts from the Ukraine-Russia crisis, cushioning the impact also on global GDP. That assumption could increasingly be challenged in the weeks and months ahead if the Ukraine crisis proves a long, drawn-out affair.

With China now confronting renewed urban and industrial lockdowns as Covid-19 cases reignite, and with an emerging narrative in the US around nascent recessionary risks as Treasury yield curves invert, economic slowdown could become a broader-based phenomenon.

From the Economist's Chair: Ukraine crisis to weigh on 2022 recovery

The outbreak of conflict in Ukraine last week saw a short-lived surge in commodity prices, extensive sanctions imposed on Russia, and a flight towards safe havens. Although commodity markets eased on Friday (“buy the rumour, sell the fact”), and energy exports are prese...