Medium Range (MR) clean tanker freight rates from northeast Asia have fallen from their record highs in late September on reduced spot activity, as many participants were away for the week-long APPEC conference in Singapore during the same period. But what are the short- to medium-term expectations? Are the lower freight rates here to stay? Or could rates recover?

Chartering activity fell, with Argus recording 25 MR fixtures over the two-week 17-30 September period on the South Korea-Singapore, US west coast (USWC) and Australia routes compared with 31 over 3-16 September.

Spot trades were lower, as high freight rates caused some trading firms to adopt a wait-and-see approach and because many participants were also away at APPEC. 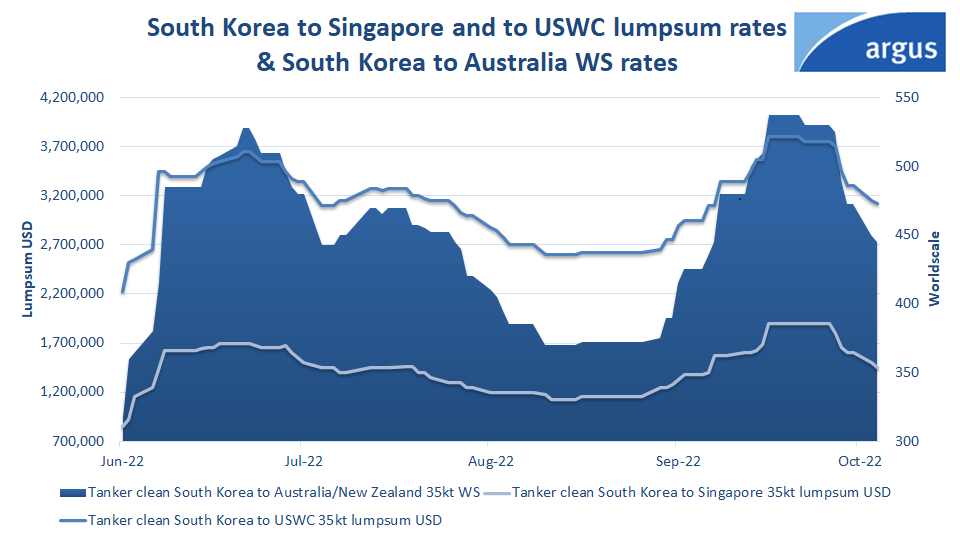 Several off-market deals were done directly between charterers and shipowners. But these were likely concluded at lower levels than prevailing market rates, participants added, some of which could have also combined on to larger Long Range (LR)2 vessels and/or some LR1 vessels.

Spot MR supplies over a 10 day-period increased to about 16 on 3 October compared with about 11 on 27 September and four from 21 September. Vessel supplies could continue to build as some shipowners were ballasting their vessels or possibility offering at lower levels to reposition their vessels towards Asia-Pacific. Argus TCE rates for MR vessels in the southeast Asia and northeast Asia regions were on average about $30,866.59/d higher than TCE rates on the Mideast Gulf to east Africa and east Asia routes.

But MR tanker freight rates from northeast Asia had previously risen to a record high on 16 September from 26 August because of reduced vessel supplies, following delays resulting from typhoons and increased demand. 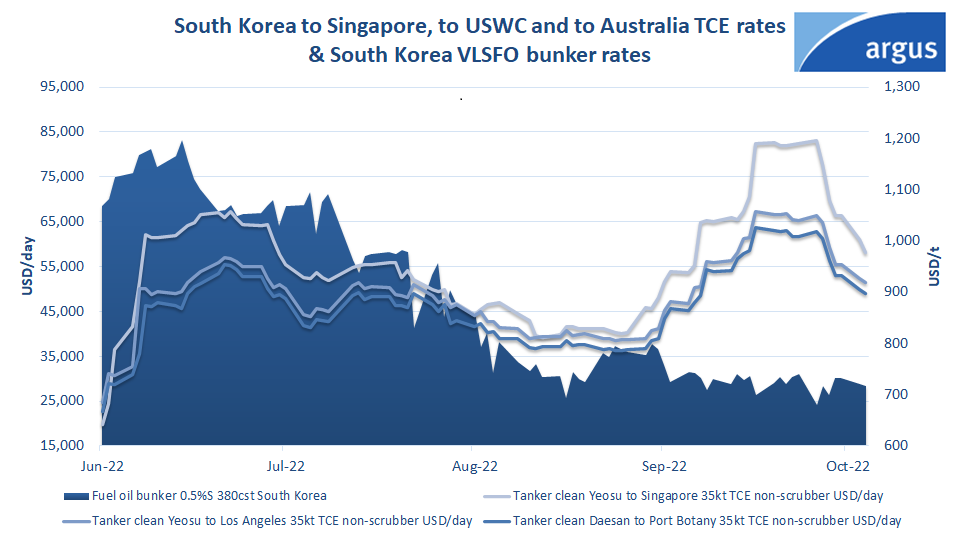 TCE rates moved up by a larger margin because of lower bunker prices. The price for very-low sulphur fuel oil prices in South Korea fell to $720/t on 21 September from $783/t on 26 August.

Clean tanker freight rates in northeast Asia had been on the rise mainly because of reduced vessel availability because of biodiesel flows from China to Europe and with the impact of typhoons Hinnamnor, Muifa, and Nanmadol that formed in the region,. But supplies have now increased so should shipowners still remain hopeful?

China released a massive fifth batch of oil product export quotas on 30 September, as domestic consumption was slowing because of Covid-19 curbs and weaker economic activity. Refiners were granted 13.25mn t (107mn bl) of products, including gasoline, diesel and jet-kerosine.

Asian refiners are also gearing up for a potential energy crisis in Europe, given soaring natural gas and power prices and a rise in heating demand in the fourth quarter.

Asian gasoil supplies are tight, with at least seven major refineries having maintenance during September-October. But output is expected to climb over November-December as winter gets under way in Europe. This could aid the flow of gasoil to this region as a substitute for Russian supplies. European gasoil demand is expected to firm as sanctions on Russian oil imports come into full force early next year and as utilities switch away from natural gas. The IEA has said it expects gas-to-oil switching to bolster demand by 400,000-500,000 b/d in Europe in the fourth quarter and the first quarter of next year.

Freight rates in the northeast Asia region are poised to potentially move higher, with China’s massive product export quota, along with seasonal and geopolitical expectations.

But uncertainty about the time limit for using the Chinese export quotas could derail a quick recovery. There are expectations that some of these granted export quotas could still be valid for 2023 or at least its first quarter. Should the deadline for these exports be for 2023 instead of the end of 2022, this will reduce refiners’ need to scramble for vessels, possibly meaning freight rates might not necessarily rebound to previous record highs.

Freight rates for Asia Pacific Panamax routes have been moving higher since the start of September, as multiple typhoons have led to disruptions in vessel schedules, thinning spot vessel supplies in the northeast Asia region. But are rates able to sustain at these highe...