Several Canadian heavy crude grades now trade at the US Gulf coast, and the combined daily trade volumes of similar quality WCS and Cold Lake is particularly strong. As part of our 6-part series examining the US Gulf coast crude export landscape, Vice President, Business Development Jeff Kralowetz and Americas Crude Reporters Alex Endress and Brett Holmes explain the current environment of heavy crude at the US Gulf coast and how the emergence of the WCS Houston benchmark gives the Gulf coast something it has never had: a liquid, transparent marker price for heavy crude based on actual trade rather than government-issued formulas.

Jeff: Hello, everyone, and welcome to the podcast from Argus. We're a leading provider of energy and commodity price benchmarks. And this is one of a six-part series about the prices affected by the changing U.S. crude oil infrastructure. I'm Jeff Kralowetz, Vice President of Business Development for crude in North America, based here in Houston.

Alex: I'm Alex Endress, a crude reporter based in Houston.

Brett: And I'm Brett Holmes, a crude reporter based in Calgary.

Jeff: So if you've traded or watched heavy crude markets at the Gulf Coast, you know that we've never had a truly robust, resilient, market-based, hedgeable price benchmark for heavy crude. But as more Canadian heavy comes to the Gulf, and as it trades on a spot basis, we see WCS at Houston being embraced by the industry as a benchmark price for the broader Gulf Coast heavy crude market.

Alex: It's worth mentioning, though, that on medium sour crude markets at the Gulf, there has been a strong price basis since 2009. So that's the Argus Sour Crude Index, also known as ASCI. ASCI is a basket price of three medium sour U.S. offshore grades, including Mars, Poseidon, and Southern Green Canyon. Every barrel of Saudi, Iraqi, and Kuwaiti crude sold into the U.S. is now priced on ASCI. And for hedging purposes, trades on medium sours can easily be hedged on the financial contracts settling on Argus Mars. But as Jeff said, there has never been an actively traded grade of heavy crude that could serve as a good proxy of price for the heavy grades bought and processed by Gulf Coast refiners until now.

Brett: WCS, or Western Canadian Select, has been a benchmark heavy grade in Western Canada since 2005. But now, the traded WCS and its similar quality, Canadian grade Cold Lake, is so large that many in the Gulf Coast see it as the most representative heavy grade in the region. Last year, several market participants suggested that Argus could pool the trades of WCS and Cold Lake done in the Houston area and that these trades would be the best possible representation of the price of heavy crude at the Gulf Coast. So, we launched the combined WCS and Cold Lake assessment in Houston at the end of December 2018. And the volume of trade reported to us has now grown to more than 180,000 barrels per day. That's more than LLS.

Jeff: Okay, thanks a lot, Brett. Alex, why don't we start with you? What can you tell us about how much the WCS Houston assessment has grown since we relaunched it back in December? And how much of the volume behind this assessment is WCS, how much of it is Cold Lake trades?

Alex: So, the WCS Houston assessment had 51 trades in the July trade month, and that's more than 180,000 barrels a day of trade reported. That means we had an average of two to three actual deals per trading day to give us price signals for the price of heavy crude at the Gulf Coast. It's true that a lot of WCS is termed up at the Gulf Coast. So, although it's regularly being processed by Gulf Coast refiners, there are many months where it does not trade on a spot basis. And that's why including the very similar quality Cold Lake crude helps make the Argus WCS Houston index a more robust price marker.

Cold Lake typically trades within a five cents a barrel of the price of WCS at Houston, and it trades a lot more often. So, while we only had a couple of WCS trades in July, for example, we had 49 trades of Cold Lake to show us what the value was each day.

Jeff: All right, thank you very much. Brett, we're switching to you. Can you talk a little bit about quality? There's quite a price spread between Cold Lake and WCS in Western Canada. Why do you think the industry in the United States wants those two grades considered together at Houston?

Brett: So, it's true that there is a difference in Western Canada of about 40 to 80 cents between WCS and Cold Lake. Part of that price difference is because Cold Lake, up here, trades are typically done in Edmonton while WCS trades are typically done at Hardisty, a different storage hub, a little bit further downstream on the Enbridge pipeline system. But there is also some price difference in Western Canada attributable to quality. Data from crudemonitor.ca shows the average of six months of quality testing on both WCS at Hardisty and Cold Lake at Edmonton.

It shows the following. WCS is at about 21.4 degrees API gravity, while Cold Lake is at 22.1. Pretty similar. Sulfur for WCS, 3.61%, Cold Lake, 3.71%. Also pretty similar. And acid number, or TAN, for WCS is 1.07, while Cold Lake is 1.19. So you can see that WCS and Cold Lake are very similar grades, even in Western Canada. Once these 2 grades move through nearly 1,500 miles of pipelines and multiple tank systems, the experience of U.S. Gulf buyers is that there's not much quality difference. And most Gulf Coast buyers are metalled up, so the TAN difference is negligible for their systems. As Alex said, the two grades tend to trade within five cents of one another once they've reached the Gulf Coast. 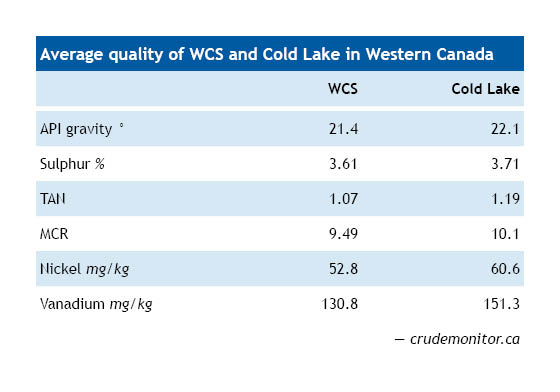 Jeff: Very good. Let me follow up with one thing, Brett. I think a lot of our listeners would be interested to know roughly how much WCS and Cold Lake is produced, and who are the producers.

Brett: Well, the producers don't officially report their open volumes to us. But we think the production of WCS is around 350,000 b/d, or maybe a bit more in an average month. So that's close to the production of a grade such as Mars. WCS is a blend that is created in tanks at Hardisty, again, much like Mars is a blend created by producers who send their barrels into the Mars offshore pipeline system delivering into Clovelly. In the case of WCS, the contributing producers are Suncor, Cenovus, Canadian Natural Resources, and Husky.

In Cold Lake, some of the larger producers are Imperial, which is majority-owned by Exxon Mobil, Cenovus, Canadian Natural Resources, and a few others, which combined, we pegged their output to over 500,000 b/d.

Jeff: Very good. Alex, back to you. One of the things that exchanges look for before they launch a financial contract on a physical grade of crude is how robust is that physical market. In other words, do one or two participants have a large influence on the trade of that physical grade? What can you tell us about the diversity of the WCS Houston market?

Alex: Well, the most important metric might be this. There were 20 unique participants in the WCS Houston market in July. And so that means that no single trader had more than 20% of the trades. This is getting close to the levels of participation and diversity that we actually see in the LLS and Mars markets. So we think the exchanges are going to find plenty of diversity and strength in the WCS Houston market. And in fact, ICE has already launched a financial contract settling on the Argus WCS Houston physical price, and CME plans to launch its contract on Argus WCS Houston soon. This means that, for the first time, the Gulf coast will have a way to hedge the price of heavy crude.

Jeff: Okay. Thanks, Alex. And maybe just to point from our experiences, that the last little bit about hedgeability is pretty important to the growth of a benchmark. We saw multiple international buyers of light crude at the Gulf coast start to include the Argus WTI Houston number as the price in their purchase contracts once there was a strong financial contract that allowed the buyers and the sellers of the physical grade to hedge it. So just to wrap up, you might want to explain, how do we get all these trades that we average into our WCS Houston daily price?

Alex: Sure. So we get the trades reported to us by the brokers who actually do the trades. So this is a slightly different system than what we see in Canada. But here in the U.S., essentially, all brokers report trades to Argus on the instruction of their clients. All of them want to see a robust index that represents all of the trades done. Argus reviews the trades as they come in, and then we calculate a volume-weighted average of each day's trades. And that average sets our price index for WCS Houston for the day.

Jeff: Well, thanks a lot, Alex, and to Brett, and to all of you who've been listening. You can tell that we think we have a pretty useful new pricing tool here in the form of Argus WCS Houston. It now trades more than 50 times a month, as we've said, it gives us multiple price signals every day of the value of heavy crude at the Gulf Coast area around Houston. We think it's a far more accurate price than the Maya formula, which, in the end of the day, is really just a government-set official selling price that's determined by an unhedgeable K-factor.

Argus WCS Houston is a liquid, transparent, and soon to be hedgeable grade. It's a big step in the maturity of the heavy crude market in the Gulf coast. And we think it's a step that should open this market to far broader participation in the months and years to come.

Brett: So that brings us to the end of this episode. We appreciate you listening. And be sure to listen to the other five parts of this series about U.S. crude. If you want more information about any American crude markets, including WCS, please check out the Argus Americas Crude report.

Alex: We also have a date set for the next Argus Americas Crude Summit, which will be February 3rd through the 5th of next year, in 2020. Check out argusmedia.com for more details. Thanks for listening, and we'll be back next time with another look into one of the prices that create our world.