Export cargo demand on the US west coast has outstripped supply of medium range (MR) clean tankers in the region, allowing shipowners to increase freight costs. 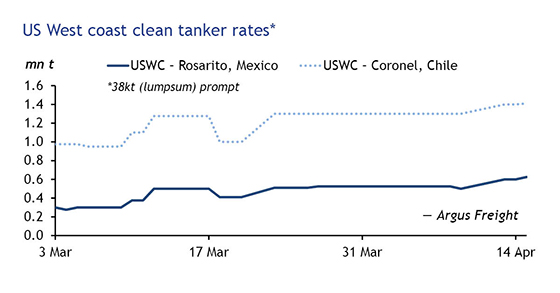 Refined products export loadings on MR tankers in the US west coast reached 320,000 b/d in the week ending 12 April, which was the highest weekly total stretching back to at least 2017, according to data from oil analytics firm Vortexa.

A glut of refined products in California, largely a result of diminished demand from Covid-19 containment measures, has pulled prices there lower. Cash differentials in southern California diesel markets moved negative to the ULSD futures contract on 6 April. Levels have since traded consecutively lower, reaching a six-year low of -17¢/USG yesterday. Outright prices of EPA ULSD, the export grade of California diesel, have averaged $0.97/USG during the first two weeks of April, including hitting a 17-year low of $0.77/USG yesterday.

While many of the recent export cargoes out of the US west coast are heading to west coast Latin American buyers, some are pointed toward Asia, which is set to receive a wave of naphtha shipments from the Americas.

Vessel tracking shows four MR tankers - the Marlin Marshall, Silver Ellie, Sven, and the UACC Manama - on their way to Asia from the US west coast. By comparison, clean MR tanker shipments on that route amounted to only 3,000 bl/d in 2019, the equivalent to roughly three MR tankers for the entire year.

Podcast: Oh Canada – and its crude