US exports to Africa totaled 206,100t in November, up from 185,000t a year earlier, according to the latest US Census Bureau data.

Egypt took 126,900t in November, its first US coke order since February, according to the latest data. Egyptian cement buyers focused on importing US coal for much of the year, as prices were more favourable than US coke. The startup of a domestic coker also pressured seaborne coke demand.

But by October, US coke prices had fallen enough to make it more attractive than US coal, and Egyptian cement buyers began purchasing coke for November delivery.

Togo also received its first-ever US green coke cargo, according to data going back to 1992.

US coke exports to Africa may have been higher if not for Morocco, which did not receive any coke in November. It was only the second time this year that no US coke shipped to the north African country. 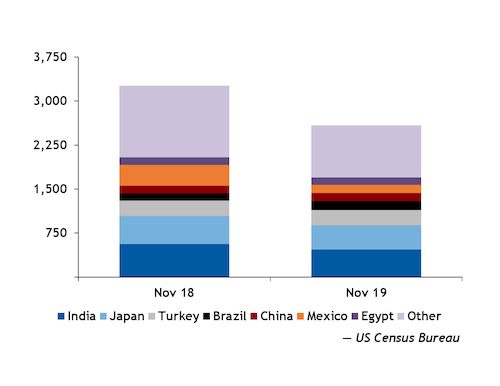 US coke exports to Turkey of 261,100t for the month recovered from particularly low levels for most of the year, making the country the third largest destination for US green coke in November. Despite the shipments being the largest to that country since February, November volumes were still 1.4pc less than the same month a year prior. Turkish demand for seaborne coke has been softer in 2019 and is expected to remain so after the startup of several nearby refineries.

India remained the top destination for US green coke for the third month in a row, with 472,400t shipping in November. This was followed by Japan with 412,800t. But despite leading the pack in November, both India and Japan reduced their purchases of US coke by 16pc and 13pc, respectively, from the year prior.

Slow economic growth has dampened demand from Indian cement makers, who have also been eyeing domestic coke as the Indian rupee weakens against the US dollar. Domestic refiners lowered November coke prices, further reducing interest in seaborne US coke.

And though US coke shipments to Japan were lower than the same month a year prior, November 2018 had been a near record-high. The country's January-November 2019 coke receipts are 9pc higher on the year as the US-China trade war encourages sellers to seek alternative markets. 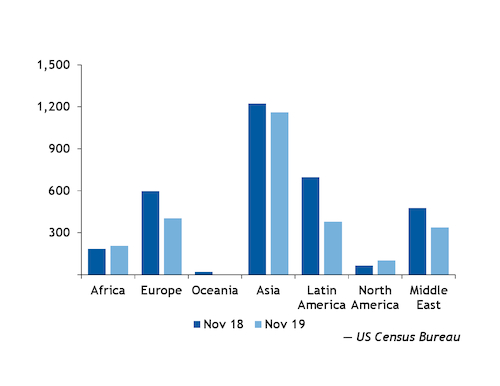 Conversely, US green coke exports to China have tumbled all year as a result of the trade war, while shipments rose slightly to 138,400t in November. Exports from January to November have fallen by 33pc to 2.19mn t.

Coke exports to the Latin American region also softened by 37pc on the year in November. This was largely because of a smaller share by Mexico, whose economy is struggling. The country took just 137,000t of US green coke in November, down by 61pc from a year prior.

Countries like the Dominican Republic, Honduras and Ecuador, which have taken more than 300,000t each since January 2019, also took no US coke in November.

Overall, the US exported 2.59mn t of green coke in November, 21pc less from a near record-high of 3.26mn t a year prior.