Bitumen is the Cinderella of oil products – it has gone from languishing at the bottom of the pile, while more desirable products hog the limelight — to becoming something of a star performer, relative to products such as gasoline, diesel and jet, which usually trade far above it.

Part of the strength has come from good demand — road paving work is largely considered essential and has not simply stopped in many countries — while a reduction in road traffic has helped accelerate project work in some places. If there have been stoppages, protective gear and distancing measures have allowed activity to quickly resume. 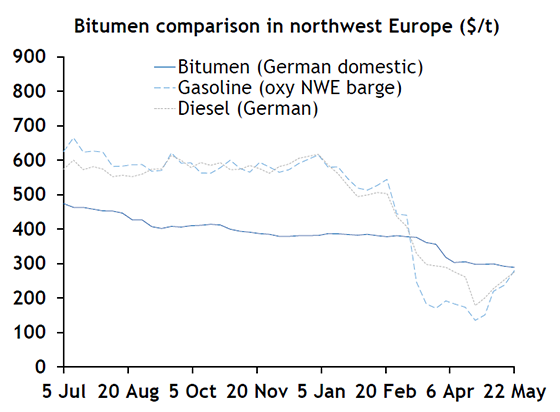 As of the end of last week (22 May) gasoline, diesel and bitumen for domestic consumption in Germany were all trading within $15/t of each other – almost unheard of, especially with bitumen being the most highly priced – but then we are in unprecedented times as the pundits are keen to remind us.

Bitumen traditionally trades as a differential to high-sulphur fuel oil (HSFO), but here too domestic bitumen has maintained much higher values. Bitumen has traded around $100/t stronger than HSFO in Germany during this May than in the same month last year. The premium peaked at nearly $260/t at the end of March, but HSFO has strengthened significantly since then.

The relationship with crude has also been volatile, but bitumen still unusually retains a premium to light sweet crude prices. With crude prices at their lowest in late April, Rotterdam domestic bitumen traded at more than $100/t above Ice Brent crude futures, but on 22 May the weekly bitumen price was just $12/t above the crude marker.

When crude prices crashed in March it offered an immediate boost to bitumen margins to record levels, described as “spectacularly good” by some European refiners. Since then crude and product prices have recovered and are likely to have passed the bottom.

Current warm and dry weather across much of Europe has also helped, with markets such as the Netherlands ahead of last year’s consumption levels.

As crude prices have rallied the gap has narrowed and the fairy tale picture looks a little less rosy, but bitumen’s previous status as a waste product has surely come to an end, aided by tighter supply as refinery run levels are lower during the pandemic. The bottom of the barrel product has gone to the top of the heap in much of Europe at least. How long that will last depends on how quickly demand recovers for crude and the other oil products hit hardest by the pandemic.

Find out how the heavy products have reacted to the compound effect of IMO 2020 and Covid-19 in this latest Argus update.

Crude and jet fuel markets on the runway for price recovery

It may seem remote right now, but despite the recent unparalleled loss of global oil demand, economic forces will sooner or later conspire to rebalance the market as demand recovery takes hold and crude production in high-cost regions falls.

Listen in to the latest Driving Discussions podcast, this time spotlighting the state of Russia's gasoline market in the midst of the global Covid-19 pandemic.