Depending on energy and environmental policy choices, global oil demand in 2040 could be as low as 58 mb/d or as high as 109 mb/d, according to long-term outlooks released these last two months by BP, Total, Opec and the IEA. An Argus Consulting “business as usual” projection formulated in July came in near the upper end of that range, implying peak global oil demand around 2030, followed by relatively gradual decline in the ensuing decade. The Argus, BP and Total “business as usual” scenarios result in 2040 oil demand remaining close to pre-Coronavirus levels around 100 mb/d. In contrast, IEA and Opec both model existing policy scenarios with demand remaining rather higher, on an apparent plateau near 109 mb/d through 2040.

Transport and petrochemicals sectors to be key

With the transport and petrochemicals sectors accounting for over 70% of oil use in 2019, the outlook for these sectors, particularly in rapid-growth Emerging Markets (EMs), will be key to oil demand trends longer term. So too the focus of post-Covid recovery investment efforts, structural change in global supply chains and consumer behaviour brought about by the pandemic, and the resilience of existing environmental policy affecting these sectors as economies emerge from Covid-19 recession. 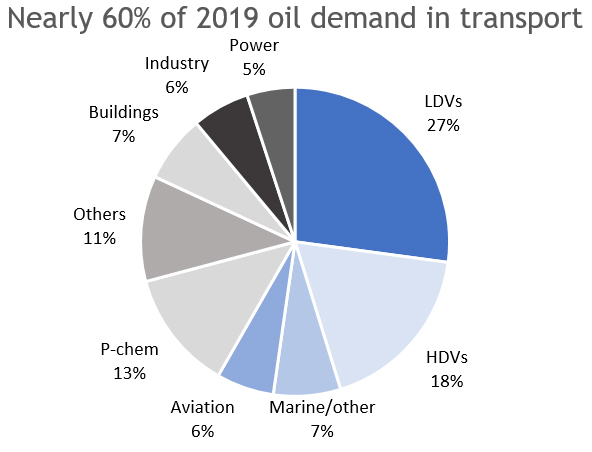 Recent months have seen further elaboration of the EU’s plans to place energy transition at the heart of post-Covid recovery, China’s announcement of its 2060 carbon neutrality pledge, and the growing likelihood of a Biden Presidency in the US, which is likely to re-integrate the US in the Paris climate accord. With record-low interest rates seemingly here for the foreseeable future, incorporating capital-intensive renewable energy in pandemic reconstruction programmes also looks more affordable. All these factors would seem to argue for a future oil demand profile in the lower half of the range shown above.

Nonetheless, Energy Transition is not a one-size-fits-all phenomenon. The appropriate mix of policies, fuels and infrastructure to achieve both clean air and lower carbon emissions will differ within and between regions, and across different sectors of the global economy. In addition, Covid-19 has raised awareness of a need to improve industrial supply chain resilience, a concept that may prioritise local energy resources and manufacturing capabilities, whether based on renewable energy or traditional hydrocarbons.

Amid rising international diplomatic and commercial tensions with China, some politicians also express reservations about a headlong rush to reliance on Chinese-manufactured solar panels or electric vehicle components, industries in which China has a dominant market share. Similar logic, of course, might see China accelerate its own clean air objectives and the electrification of urban vehicle fleets to reduce dependence on imported hydrocarbons.

Finally, the economic hit from Covid-19, and the optimal allocation of rescue package funding to deal with it may prioritise some elements of the energy transition at the expense of others. Contributors to the Argus Petcoke Live Virtual Conference in September, for example, noted that government support for energy efficient buildings and investment in more resilient, renewables-ready power grids might take precedence through mid-decade over incentives for passenger electric vehicles (EVs). High unemployment, increased precautionary household saving and slower vehicle fleet turnover, it was argued, might further weigh on EV penetration in the next few years, unless significant increases in government incentive programmes or tighter mandates are forthcoming.

Don’t throw the baby out with the bath water

Clearly, Covid-19 and the inter-play between national economic recovery plans on the one hand, with Energy Transition priorities on the other, will help determine which global oil demand profile becomes the most likely. But demand is only one half of the oil equation. The chart above illustrates not only the “envelope of uncertainty” for oil demand for the next 20-30 years, but also a hypothetical oil production trajectory in the absence of continued upstream capital investment.

Mainstream media have highlighted calls by the more extreme among environmental activists to ban conventional hydrocarbon investment altogether. While that is unlikely to happen, the cost and availability of capital for new fossil fuel projects is indeed becoming strained. International oil companies, financial institutions and even habitually “fly-below-the-radar” commodity traders have recently showcased a raft of diversification strategies, renewables investment portfolios and ESG-related financing instruments in response to rising public concerns about climate change and related government policy initiatives.

Questions persist as to the relative rates of return from renewables vs. hydrocarbon projects, even if renewables revenue streams can look enticingly stable in an era of intense oil price volatility. Nonetheless, from a business reputation perspective it is now impossible for corporations to ignore public disquiet over global warming and government policy priorities toward lower carbon energy, whether directly via fuel mix or by CO2 emission remediation.

Equally evident though, and regardless of the eventual trajectory of oil demand, the existing upstream resource base and capital stock cannot simply be left to wither. Without ongoing investment, baseload supply decline of 4-4.5% per year as reservoirs deplete would leave an oil production trajectory potentially falling faster than demand under even the most ambitious of environmental policy frameworks. Avoiding the economically crippling crude price surge that would accompany such an, admittedly unlikely, scenario needs ongoing upstream oil and gas investment of between $600 to $800 billion per year in the period to 2040, according to the IEA.

Given current anaemic levels of crude prices, weak relative valuations of traditional energy producers in equity markets, and an increasingly skeptical investment community, securing the necessary funding could prove challenging for private upstream companies. Little surprise therefore that producer NOCs seem to have softened their antagonism towards the idea of Energy Transition, potentially envisaging a low-cost “last-man-standing” role if oil demand indeed gets squeezed in the years ahead.

From the Economist’s Chair: Dog Days

The Covid-19 caseload is rising again and commodity markets have lost some of their earlier optimism, so a steady hand will be required to implement policies that help avoid another phase of blanket lock-down.

From the Economist’s Chair: Paint It Bleak

As summer arrives and the world emerges from lock-down, hopes are high for gradual economic and oil demand recovery. Alongside reasonable levels of Opec+ discipline, this could help place a floor under crude prices. But whisper it quietly, a bleaker scenario also exists...

From the Economist’s Chair: US shale – this time is different

US shale’s decline and recovery trajectory from 2014-2017 is unlikely to be replicated this time around. A different market backdrop, financial pressures and sector consolidation all point towards a “hockey stick” path, with a steep decline and shallower recovery likely...