The Ice ARV paper swap, which settles on Argus WCS Houston, has seen a rapid rise in open interest and trade volume over the past 6 months. What in the physical market is supporting this growth?

In this episode of The Crude Report, vice presidents of business development Jeff Kralowetz and Bruce Fulin discuss the connection between the physical and financial markets for heavy Canadian crude at the US Gulf coast.

My name is Jeff Kralowetz and joining me today to talk about the rapidly maturing Canadian heavy crude market at the [US] Gulf coast is Bruce Fulin. We both do business development for crude for Argus out of the Houston office, but Bruce has experienced trading both physical and paper crude out of the Gulf coast. So, Bruce, welcome.

Jeff: That brings me to the first topic, I think, we could get into. And that is, we've seen a rapid rise in the open interest in the trade volume in the last five to six months on the Ice's ARV paper swap contract, and that's the contract that settles on the trade month average of Argus WCS Houston. We can get into some details of that Argus WCS Houston physical price in a second, but I guess, the first question is, how do you think having a liquid and transparent financial market for heavy crude at the Gulf coast helps that market? And how do you think people are going to use ARV or CME's version, called WHT?

Bruce: Hedge positions right off the top of my head, Jeff. Not just on WCS, but perhaps other crudes like Castilla, Oriente or many of the regional heavy crude sold in the US Gulf coast. Perhaps even one day, we're going to see it used against Maya on the Argus WCS positions that are done in the Gulf coast currently. 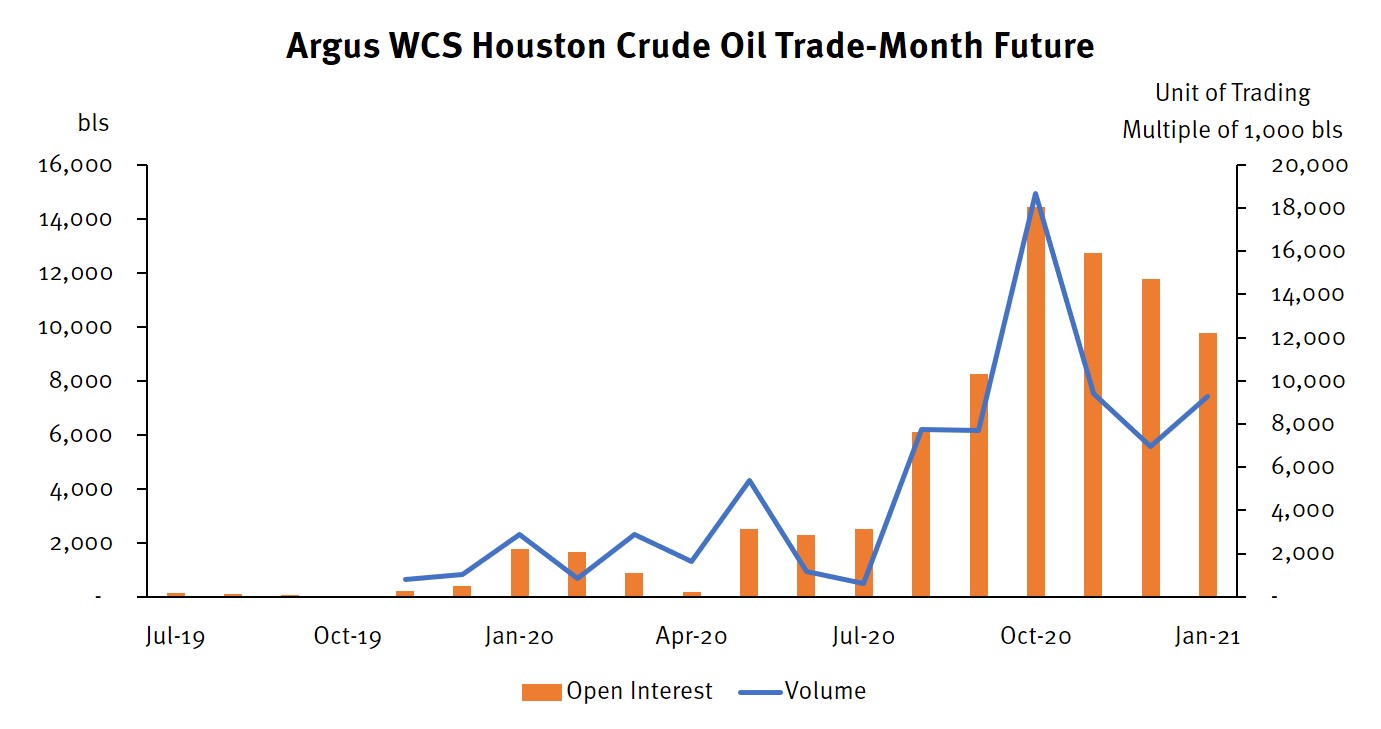 Jeff: Okay, great. And so, maybe this is the chance to backtrack a little bit and describe the Argus physical price for WCS at Houston. It's actually Cold Lake and WCS trades done at three different places in the Houston area. And it now gets about 200,000 b/d of reported physical trade backing up that daily number. It reflects the growing physical presence of Canadian crude at the Gulf coast. And it's worth noting just a couple numbers here. In October, Texas took 500,000 b/d of Canadian, and in November, the last month we have data for from the IEA, there were 630,000 b/d of Canadian crude that reached PADD 3, the Gulf coast. So, I guess I could also mention that WCS trades at Cushing.

So, anyway, in light of all of this, you work a lot with refiners. What do you think the refiners are thinking about Canadian heavy crude? Is it a base load for them? Is it replacing Venezuelan crude that's not coming in? How do they see the Canadian market?

Bruce: Yeah. The refineries, they're extremely comfortable with WCS and Cold Lake. This is a very common knowledge crude that's used across the US Gulf coast. They need to optimize their runs and their refining capacity. So, it's interesting to note that there is a lot of Canadian heavy that comes down as well, like AWB, DDB and other high TAN crudes. A lot of the US Gulf coast refiners can run these high TAN crudes. So, it's a natural market for a lot of Canadian crudes coming down from the production that's high TAN or heavy crudes. And I can also mention here that Argus is starting to get more of those assessments or more of the price trading data around the high TAN crudes that are reported to us. We're always open to the concept of launching a high TAN Canadian physical spot price index for the Gulf coast if we can get enough broad cross-section support from the producers, the refiners, the traders, and the brokers that are, you know, engaging with the Canadian heavy crudes as it is right now.

Jeff: Great. You know, another thing that's interesting, as you were talking about the high TANs, it's interesting that both the WCS Cold Lake and the high TANs, a good chunk of them are getting re-exported from the Gulf Coast to places like India and China. Spain has taken some heavy Canadian. And in the last couple of months, we're up to, like, 100,000 b/d of Canadian being re-exported mostly out of Beaumont. And I just asked our editorial team yesterday what the state is of exports. And they know of one February loading two million-barrel WCS cargo going to India. And there's another million-barrel cargo headed to India or Singapore, and they think that's WCS.

So, anyway, there's a lot of stuff going, and my question for you is, how do you see this stuff being traded on what basis? The team told me WCS is currently pricing at about $2.75 under Basrah Heavy on a deliver basis at Singapore. Is that how it's getting priced, or how do you think it's getting priced FOB at the Gulf coast?

Bruce: Yeah. So, let me walk you through this. So, the ARV makes risk management a lot easier in these situations when we're taking crude from the US Gulf coast into the Asian market. So, if you're a buyer in Asia wanting to price something on Ice Brent or Dubai, which is commonly how they like to purchase their crude gains, but you know, you're sitting there as a Canadian or North American producer. Let me walk you how that would happen.

So, you being the US or Canadian seller and you wanted to sell that VLCC of Cold Lake or WCS out of that Beaumont-Houston area, most likely as the seller, you're benchmarked against that price exposure WCS Houston on the US Gulf coast. So, the buyer who wants to purchase that on a Dubai basis into the Asian market, let's say China or India, the seller is the one that's going to be left with that price risk exposure between the Houston WCS and Dubai. In order for that seller to lay off that risk exposure, they would need to sell the ARV with ICE and then go ahead and do a swap between the WTI and the corresponding Dubai futures for that contract month of delivery for that cargo on the water.

Jeff: I'm just looking at the clock here and we're already running a bit low on time. But maybe the last point to raise is about above ground risk. One of the executive orders, that stack of 17 that President Biden signed on day one was a revocation of the cross-border permit for Keystone XL which was going to have a capacity of 830,000 b/d. But a lot of people are telling us that, "Look, there are lots of different ways to get crude to the Gulf coast. A lot of those pipes, existing pipes are getting expanded." And the rail capacity is about a half a million barrels a day. And the last month was actual shipments by rail of 173,000 b/d. So, I guess, the question is, do we expect these flows of Canadian crude to continue to the Gulf coast? And you have just been at Beaumont looking at facilities there. Can you tell us a little bit about the Gulf coast's ability to receive rail barrels from Canada and maybe a little bit about DRU? So, that's four questions in one. 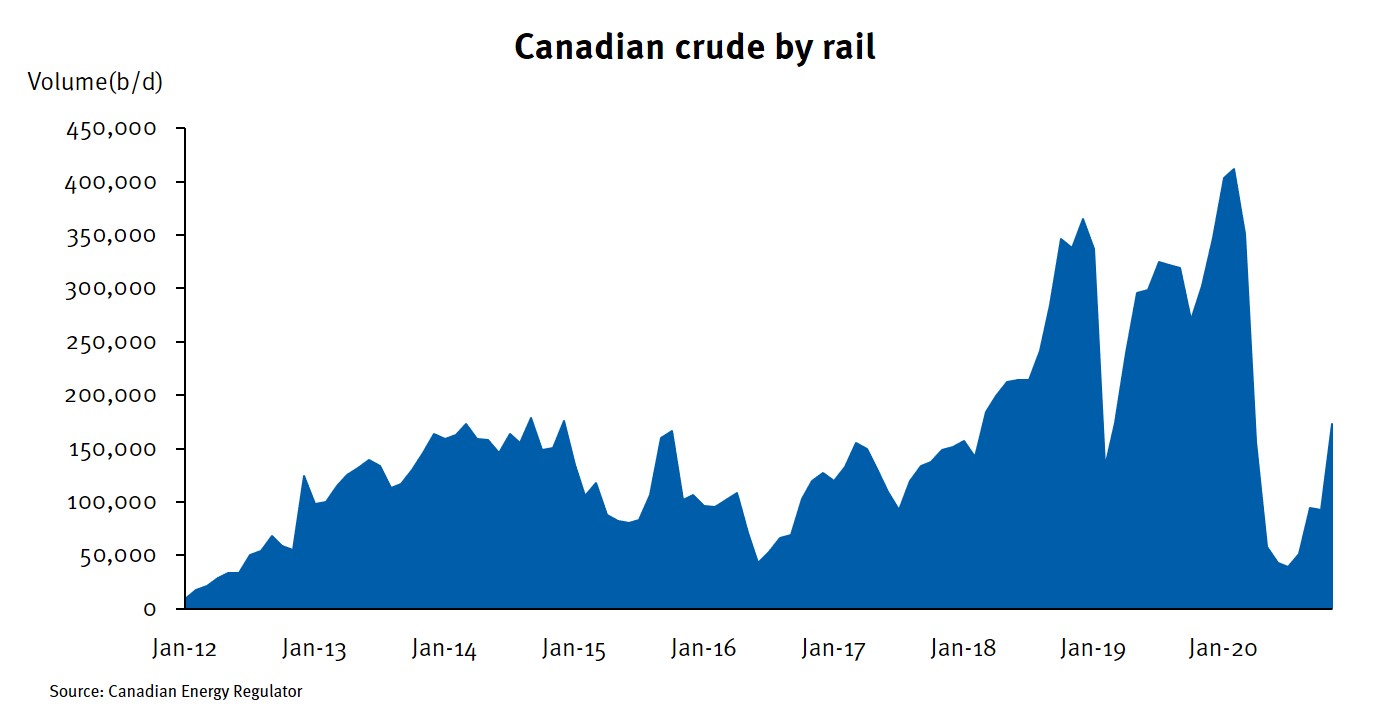 Bruce: Thanks, Jeff. Sure. Let's start with the beginning. Yes, there's over 500,000 bls, that's record levels of Canadian crude that's flowing down to the US Gulf coast. And there are extensive facilities, world-class, new, modern facilities built in, for example, in Beaumont that I was just recently visiting that can receive trains from multiple line systems. We've got pipelines that could carry heavy crude into the area. And they have the offloading facilities to not only heat the crude and to put it under the ship. So, I mean, it's pretty extensive for trade points down to the Beaumont as well as in the Houston area. So, we do have some world-class facilities that are still under construction and development that are ready to go to move these barrels out of the US Gulf coast.

But for the DRU bit, let's keep that brief. There's only about 50,000 bls of diluent recovery that's being built at Hardisty. That unit is designed to take most of the light diluent out of the bitumen before it's loaded into heated tank cars for the US Gulf coast. Once that bitumen gets to the US Gulf coast by rail car, it can then be offloaded at places like, in this case, Port Arthur, put on to barges or have diluent added so it could be run through pipelines into the US Gulf coast refineries. So, it's a rather new system that's being put down into that Port Arthur-Beaumont area. But we do expect to see, again, an example of continuation of heavy crude making its way to the US Gulf coast.

Jeff: Okay. Thanks a lot. And I think we'll probably wrap it here. Thank you guys all for joining us. Please don't hesitate to contact Bruce (Fulin) or me (Jeff Kralowetz). You could call us at the Houston office at 281-968-0000 and they'll get you to us, or you could submit a question via the website.

It looks really as if Canadian crude trade at the Gulf coast is going to keep growing and that the exports from the Gulf coast will keep growing. And, you know, Canada now is, by a significant margin, the largest provider of heavy crude to the Gulf coast. And so, something to keep an eye on. Thank you again for joining us for this initial look at it. And please join us again for the next episode of The Crude Report.