Four months after the US election, and despite expectations that an incoming Biden Administration would prioritise an early breakthrough, resuscitation of the Joint Comprehensive Plan of Action (JCPOA) on Iran’s nuclear programme more realistically looks like a late-2021/early-2022 target. With nuclear diplomacy potentially further impeded by Iran’s upcoming Presidential election in June, recent reports of covert oil flows out of Iran to China may further complicate the negotiations.

Brent futures’ rapid ascent towards $70 has been arrested in March, despite strong cohesion among Opec+ producers, an improving macro-economic outlook and renewed risk-on sentiment as Covid-19 vaccine deployment loosens the link between daily virus caseload, and hospitalisations/fatalities.

One contributor to this plateauing in prices is an apparent resurgence in crude exports from Iran into China, despite ongoing US sanctions. Tanker tracking agencies suggest deliveries in first quarter 2021 potentially averaged 500-600 kb/d, their highest since 2019 and significantly above officially reported 2020 Chinese imports from Iran averaging 80 kb/d.

Press reports suggest that recent China-bound cargoes from Iran may have been “disguised” as Omani or Emirati barrels, after tankers loading in Iran only turned on transponders during stop-over at Gulf ports en route. 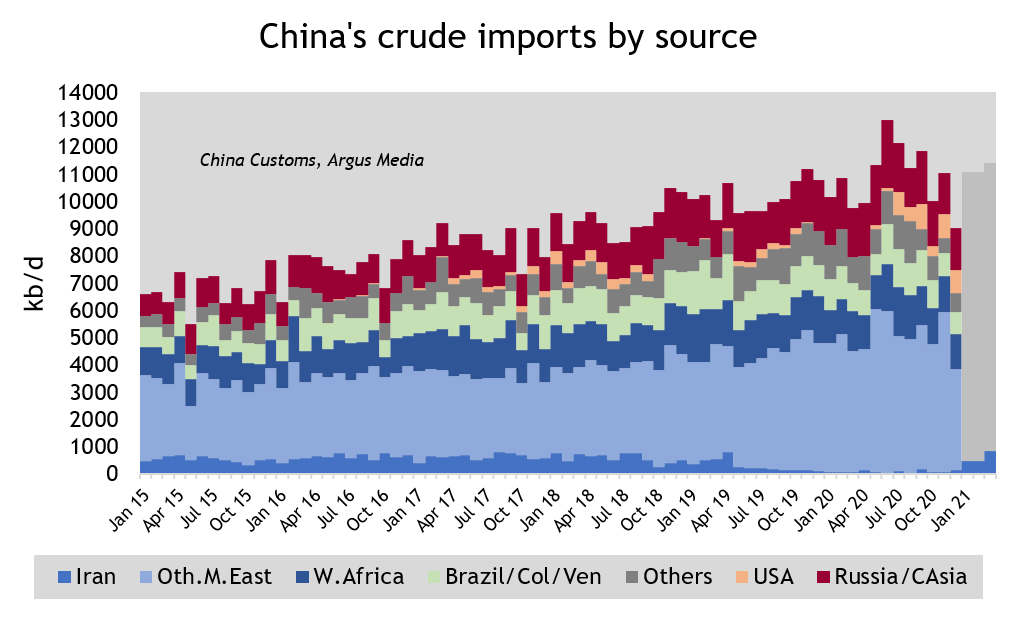 Washington officials have been quick to inform Beijing that sanctions on Iranian oil remain fully in force, thereby dispelling a theory that tolerating export leakage was a quid pro quo from the incoming Biden Administration designed to get Tehran back to the nuclear negotiating table.

Publicly, the US government insists that Iranian breaches of its nuclear obligations under JCPOA must be reversed before negotiations on re-instating the treaty can begin.

Meanwhile, Iran counters that Washington must remove all sanctions re-imposed in 2019 by former President Trump before it will dial-back its nuclear reprocessing activity, and that renegotiation of an existing treaty is in any case unnecessary. Tehran has resisted international calls for JCPOA to be broadened to limit Iran’s ballistic missile programme, also rejecting measures designed to dilute its political influence in Iraq, Syria and Yemen.

There is nothing surprising about this preliminary “jousting” before multilateral negotiations recommence. However, Iran and the original P5+1 signatories of the JCPOA (China, Russia, USA, UK, Germany and France) are all politically invested in restoring the deal, albeit with differing economic, trade, geopolitical and security concerns.

Simply put, with JCPOA seen by US Democrats as the signature foreign policy achievement of the Obama administration, and with Iran reeling economically from the combined impact of Trump sanctions and Covid-19, re-instating the deal ultimately seems much more likely than not.

But just because something can be achieved doesn’t mean it can be done quickly. With China increasingly assertive on the international stage (rising Iranian crude purchases being one manifestation), and the US going out of its way to demonstrate solidarity with its traditional allies in Asia, an evolving Beijing-Washington relationship could also affect the timing and ultimate form of any re-instated JCPOA deal. Nor can it be discounted that recently increased Iran-China crude flows themselves represent a joint testing by Tehran and Beijing of Washington’s political resolve.

Those expecting a rapid resolution of these issues also need to consider the upcoming Presidential, local council, parliamentary and Assembly of Experts elections taking place in Iran on 18 June.

Nationally, political observers expect a relatively low turnout and, partly for that reason, a high likelihood that a conservative candidate will succeed the reformist incumbent President Hassan Rouhani.

Although Supreme Leader Ali Khamenei and most conservative front-runners for the Presidency also seek the economic relief from sanctions that a reinstated JCPOA would bring, there is equally little appetite for boosting the Rouhani government’s ebbing support by enabling a rapid loosening of sanctions before polling day. 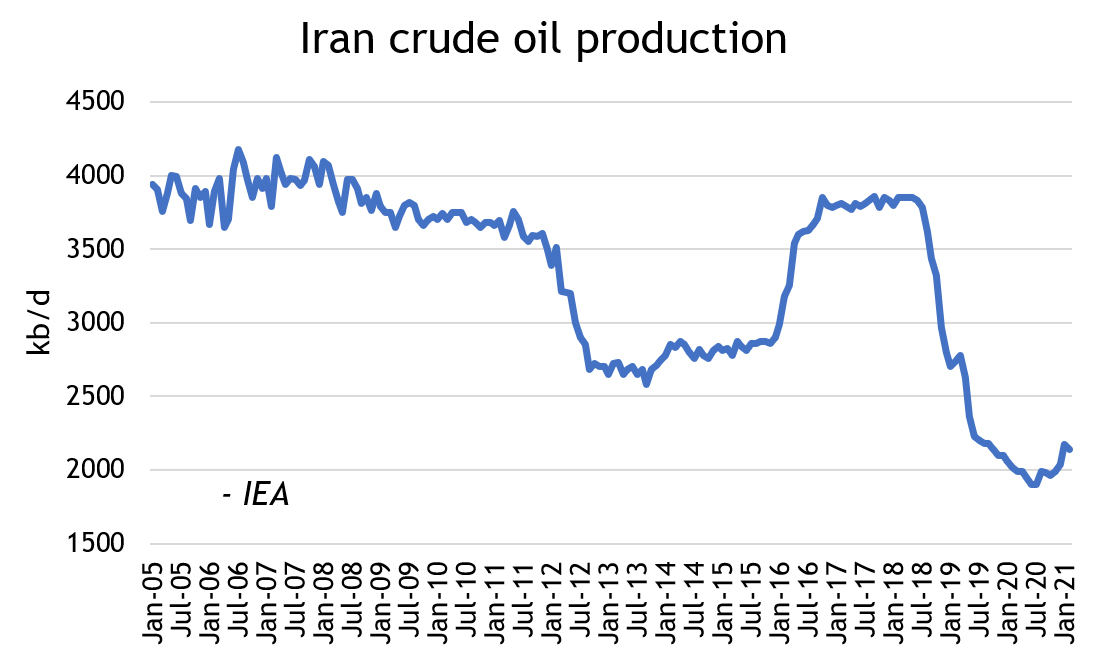 Iran’s deputy oil minister in January was quoted saying that the country could regain pre-sanctions production near 4 mb/d within two months of sanctions being lifted. Other market observers suspect that a slower, and at best partial, recovery in Iranian supply is more likely. They point to the 2016 supply trajectory after the initial JCPOA came into force, when Iranian crude production took some 10 months to regain pre-sanctions levels.

Nevertheless, an additional 1.5-2.0 mb/d of Iranian supply re-entering the market in late-2021 or early-2022 may coincide with ongoing uncertainty over global oil demand recovery just when Opec+ confront tricky negotiations on the renewal of their own market management deal.

This heady combination could continue to provide a ceiling for crude prices over the next 12 months or so.

A U-turn on plans to transform the Dated Brent benchmark has left its future more uncertain than ever.

First in, first out. Although Chinese oil demand was first to be affected by Covid-19, it was also the first to recover, ending 2020 higher by 1.3mn b/d. Despite the recovery, there are now signs that Chinese crude buying is cooling.

From the Economist's Chair: The pros and cons of super-cycling