The outbreak of conflict in Ukraine last week saw a short-lived surge in commodity prices, extensive sanctions imposed on Russia, and a flight towards safe havens. Although commodity markets eased on Friday (“buy the rumour, sell the fact”), and energy exports are presently ring-fenced from specific sanction, the inflationary impact from what may now prove to be stubbornly high commodity prices represents a further headwind for the world economy in 2022.

Long-standing uncertainty surrounding the tensions between Russia and Ukraine ended in the early hours of 24 February when Russian military forces invaded Ukraine along several fronts. Moscow’s goal now appears to be outright regime-change in Ukraine, rather than an initial pretext of protecting separatist groups in the country’s eastern Donbas region. This suggests that disruption and market volatility will be prolonged, even if Russia attains its immediate military objectives relatively quickly.

Given Russia and the Ukraine’s prominent roles as commodity exporters, a sustained period of uncertainty is likely to keep global energy, fertilizer, food and metals prices both high and volatile. Russian exports account for around 10% of globally traded oil supplies, 25% of globally traded gas and fertilizers, 35% of traded nickel, and, together with Ukraine, 25% of globally traded wheat. Elevated risk of supply disruption has driven prices higher, even if supplies are unlikely to be deliberately curtailed either by Russia itself, or via direct sanctions from western nations specifically targeting commodity exports. 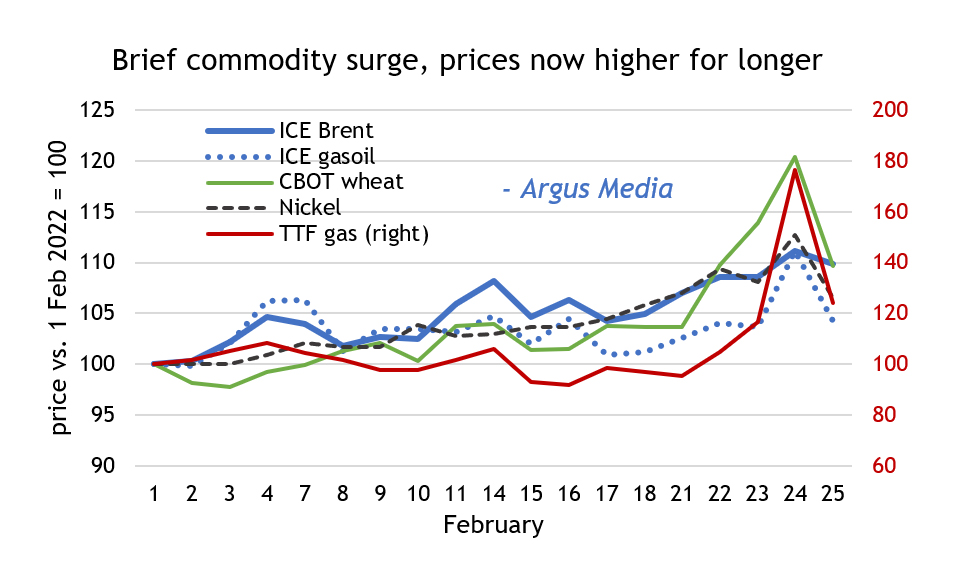 The immediate response in commodity futures markets during early trading on 24 February saw prices for crude oil, gasoil, wheat and nickel rise by +5-10% from Wednesday’s close, with European natural gas up by over 40%. Prices subsequently eased early on 25 February, not least following reassurances from both Russia and the EU/US that flows of energy exports would not be disrupted. 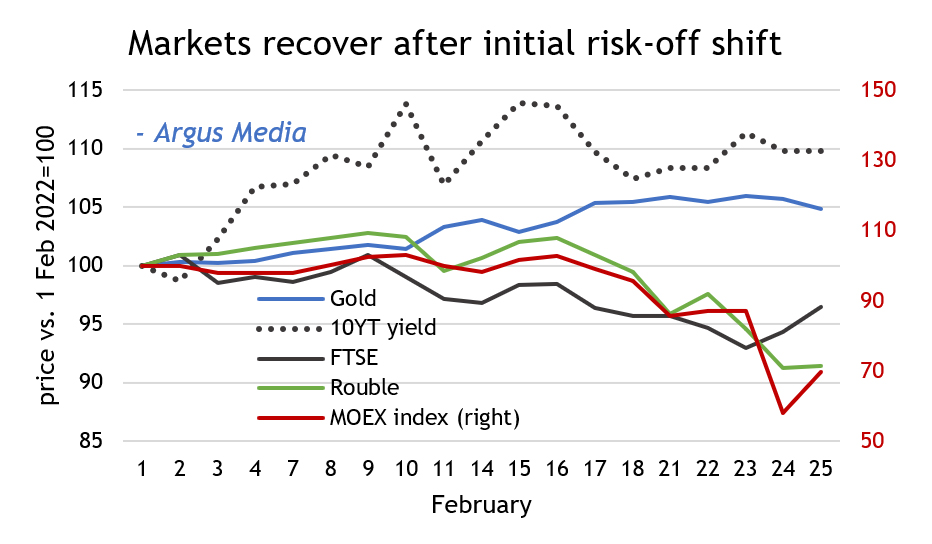 Despite such assurances, there are media reports of shippers and insurers shying away from business involving the chartering of Russian maritime vessels, and of major buyers of Russian crude oil being unable to obtain letters of credit from banks. So long as uncertainty persists over progressively tightening financial sanctions on Russia on the one hand, and the evolution of events on the ground within Ukraine on the other, commodity supply chains are likely to remain disrupted, and price volatility appears baked-in. Consumer governments have stated that further releases of strategic oil stocks may be deployed in order to limit crude price increases current near-$100/bl levels.

Broader market response saw an initial flight away from riskier, towards safer assets, with the rouble, Russia’s MOEX equity index, the S&P500, and US 10-year Treasury yields all weakening, while gold and the USD index rose. Concerns centre on commodity price rises stoking already-elevated levels of consumer price inflation. Post-invasion, Oxford Economics raised their 2022 CPI inflation estimates for Europe, the US and the World by upwards of 0.5pp each, to 4.6%, 6.5% & 6.1% respectively.

Major central banks now face a conundrum for their early-March deliberations on whether to stick with a plan tighten monetary policy and remove further liquidity from the market at a time of such political and economic uncertainty. Financial market analysts seem to believe that the US Federal Reserve will indeed begin to raise rates starting in early March as planned, but that the extent of rate rises through 2022 may now be moderated. Others see the ECB, in contrast, potentially continuing with Quantitative Easing and delaying interest rate hikes into 2023.

US and European governments on 24 February imposed tighter financial sanctions on Russia following the earlier US sanctioning of the pipeline operator Nord Stream 2 AG on 23 February. The EU followed a US lead by blocking Russian banks’ access to their capital markets, but with exemptions for energy-related transactions. The US will review their energy exemption in June, although as Russian forces began attacks on Ukraine’s capital Kiev at the weekend, the UK was reportedly lobbying G7 counterparts to also place specific restrictions on energy trade.

The EU also banned exports to Russia of EU oil refinery equipment, semiconductors, and aircraft equipment, while the US will prohibit a swath of technology exports. After initially suggesting exclusion of Russia from the SWIFT global interbank payment system would be held back as a sanction of last report, the US, EU, UK, Canada and Japan subsequently at the weekend agreed to block “certain” Russian banks from SWIFT. An EU diplomat was quoted as saying the so-far publicly unspecified banks represent 70% of the Russian banking market. Sanctions on the Russian Central Bank will also limit its access to over $630 million in international reserves. Cumulatively, the financial measures announced to date seem likely to lead to a significant downgrade for Russia’s sovereign debt, and further early-week falls for the rouble.

In the aftermath of Russia’s annexation of Crimea in 2014 the Russian economy contracted by -2.5% and the country suffered a major financial crisis. Observers have noted that this time around Russia has a stronger balance sheet, higher reserves, lower external debt and less extensive financial links with the advanced economies, with correspondingly closer financial and economic ties to China. Nonetheless, international financial isolation for Russia and increased inflationary pressures for the rest of the global economy are likely to weigh further on 2022/2023 economic growth projections which have already been progressively adjusted lower over the last six months. For their part, Oxford Economics have reduced 2022 and 2023 real GDP compared to pre-invasion estimates for Russia by -0.7% and -1.2%, for Europe by -0.3% and -0.5% and for the world by -0.2% and -0.3%. 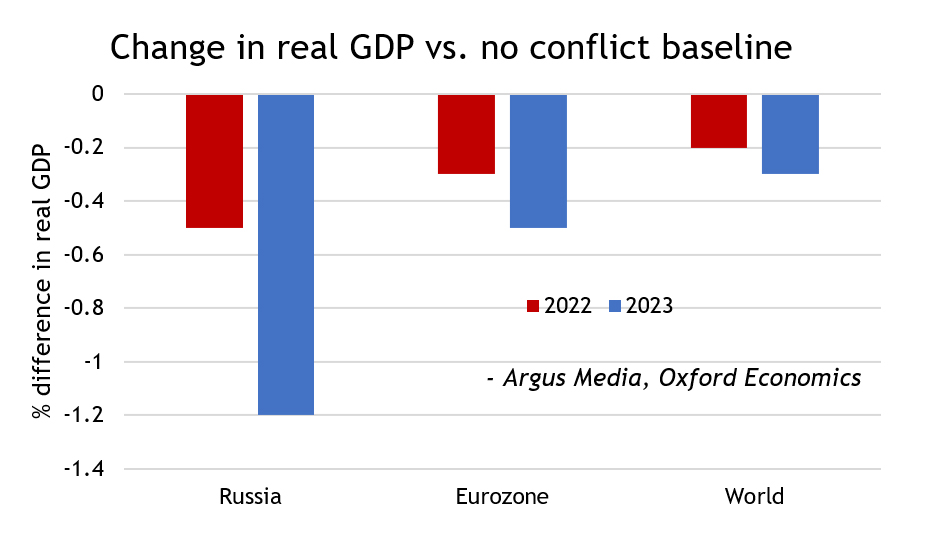 There is of course no guarantee that current high energy price levels will be sustained through 2022, not least since oil near $100 could itself begin to encourage demand and supply-side responses in the market. However, aggregate energy expenditures at today’s price levels – if sustained – would be equivalent to nearly 8% of world GDP, a level not seen since the early-1980s. Remembering the economic turbulence of 40 years ago, post-pandemic economic recovery this year risks becoming much more muted than expected amid the spectre of resurgent price inflation. 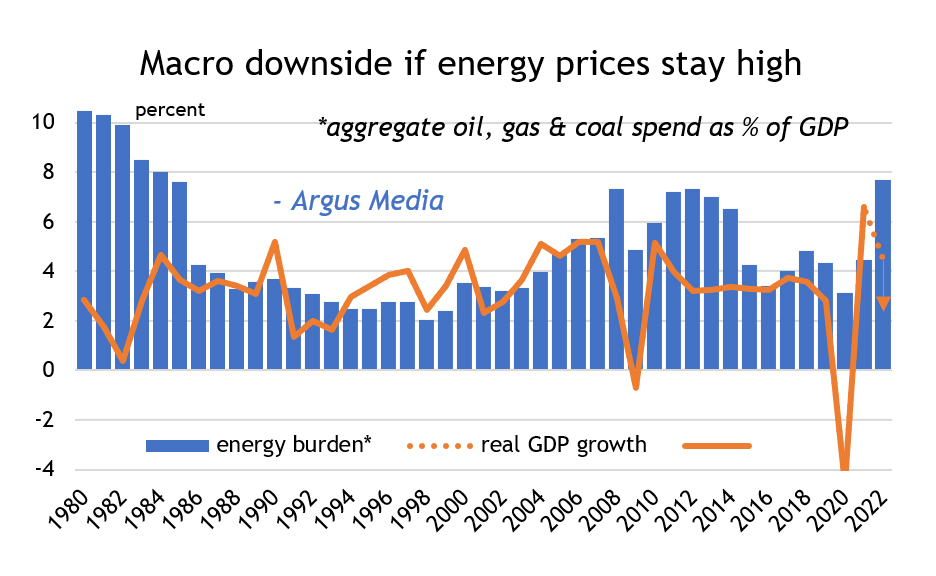 From the Economist's Chair: Drag still battling thrust in the US shale space