East of Suez Suezmax tanker rates have been subdued since the start of May, following competition from Very Large Crude Carriers (VLCCs), on reduced demand from China as the country continues to implement its zero Covid-19 strategy. Could this downwards cannibalisation continue and affect smaller Aframaxes? Or are there potential upsides?

The bigger they are…

Rates for 130,000t Suezmax vessels on Mideast Gulf to east Asia and to west coast of India routes have been volatile since the Russia-Ukraine conflict began, first led by uncertainty, and then a “second wind” brought about by firm demand for US Gulf and west African crude from Europe as alternatives to Russian crude.

In both instances freight rates were unable to sustain at the higher levels, first as uncertainty eased and later as higher rates led to competition from VLCCs that pressured the market.

But compared with levels prior to the Russia-Ukraine conflict, freight rates and earnings are at a higher level for Suezmaxes, although this pales in comparison to Aframaxes. 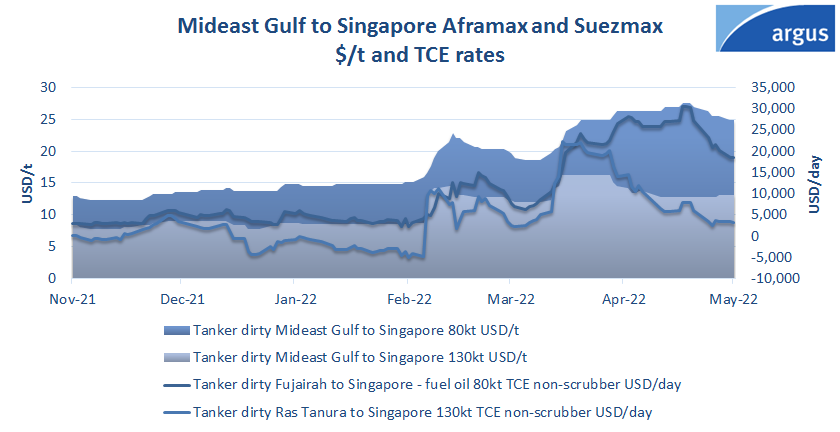 Freight rates on the smaller 80,000t Aframaxes were able to keep at higher levels on Mideast Gulf to east Asia and to west coast of India routes. Aframax supplies in the region were tight, as many vessels had ballasted towards the Mediterranean during early to mid-April. A cross-Mediterranean voyage was about $40,000/d higher than the Fujairah-Singapore route on 12 April. Tonne-mile-demand has also been higher than average, as Russian Urals that usually moves on VLCCs have been shipped by Aframaxes lately, market participants said, because Urals' record deep discounts have made smaller size imports possible.

China’s economy has taken a hit, as the resurgence of Covid-19 cases in March and demand for crude has fallen as the country continues to abide by its zero Covid-19 policy. Chinese crude runs in April fell by 11pc from a year earlier, a faster pace of decline than the 2.4pc registered in March. Production and manufacturing delays because of the pandemic can be blamed for this decline. With Covid-19 remaining a major catalyst to economic trends, there was a significant fall in consumption rates in April.

A glimmer of hope remains from refiners as restrictions have eased in Shanghai since 16 May and with detailed plans to lift the city-wide lockdown restrictions by the end of May. Fifteen of the city's 16 districts have achieved "zero social infection" — transmission of Covid-19 outside shutdown areas — Shanghai vice-mayor Zong Ming said on 16 May. But a swift resumption of normal levels of economic activity appears increasingly doubtful, as more restrictions are now being enforced in the capital Beijing. Its Fangshan district, which is home to 1.3mn people, will implement strict work from home measures for all residents. Chinese refiners also need to work through a large overhang of crude before they return to the market in force.

Cannibalisation on the horizon?

Yes, it is already happening and could continue to be a prevalent part of the market. Weaker demand has led to an increase in overall tonnage supplies, which has led to VLCCs competing for Suezmax cargoes and Suezmaxes competing for Aframax cargoes.

But compared with a typical downward cannibalisation, Suezmax vessels are the ones pressured most from the lack of demand and uncertainty. Based on lump-sum freight rates of the three crude carriers, VLCCs stand to be the most economical for east Asia. In cases where port clearances are limited to smaller size vessels, charterers may prefer to book Aframaxes because of the flexibility of operations it offers. But smaller trading firms could lack the ability to obtain a larger letter of credit, so bigger shipments might be not always be feasible. So this leaves Suezmaxes in a disadvantageous position, being cannibalised from both sides, as they only able to partially compete for Aframax cargoes and yet are being forced to face the full brunt of competition and economies of scale from larger vessels.

Freight rates for Aframax vessels could still see some support, as uncertainty may cause charterers and trading firms to prefer smaller shipments to limit their exposure.

But looking at crude demand, the overall dirty tanker markets are likely to be pressured in the short term, as demand mainly continues for short-haul voyages to other parts of Asia. China’s domestic demand for oil products remains relatively weak. But China has granted a new batch of export quotas for products, offering a supplement to its refiners to ease their inventory pressure, which could hasten their return to the crude market.

But in the medium-term the rise in spot chartering dirty tanker activity bound for China, albeit still relatively small, does give hope that a rebound could be closer to this year’s second half. But this depends on China being successful in curbing its current Covid-19 outbreak and returning in full force to the market.