Two new International Maritime Organization environmental regulations do not take effect until the beginning of next year, but they are already the subject of much speculation. The Carbon Intensity Indicator (CII) and the Energy Efficiency Existing Ship Index (EEXI) are affecting the global shipping market ahead of their 1 January effective date, and they may result in some unintended consequences as well, just like the 2020 sulfur cap before them.

The regulations may have already started to affect the time-charter market, according to Euronav’s head of fuel oil procurement Rustin Edwards, who said that charterers have been more willing in recent months to fix newer and more efficient vessels to multi-year deals. These increased rates have been driven by an expectation that the regulations will stretch the global fleet and support freight rates going forward, coupled with longer ton mile routing with the global change in oil flows.

Edwards also said that the regulations may be one factor supporting rates in the freight forward agreements (FFA) markets, especially for longer-haul routes. FFA rates on the US Gulf coast-China very large crude carrier (VLCC) route are currently trading around $7.7mn lump sum for 2023, according to shipbrokers, lower than the current Argus-assessed spot rate of $10.45mn, but up by 64pc from the 2021 average of $4.7mn.

The regulations are expected to support freight rates by leading to increased “slow-steaming,” which vessels do to reduce carbon emissions. Sailing slower tightens tonnage and supports freight rates because the ships spend more time in transit, leaving fewer ships available to load cargoes.

The rules are also expected to create a two-tier market, in which charterers are willing to pay more for higher-rated CII vessels while shunning lower-rated vessels, per the regulations.

But an expectation that the rules would lead to an increase in demolition activity has not been borne out yet. Older vessels have avoided the scrapyard as owners sell them on the secondhand market. High freight rates throughout this year and the potential for increased sanctioned trades following the EU bans on Russian crude and refined product imports have boosted demand for vessels older than 15 years.

A potential unintended consequence of the regulations is that it might accelerate the flow of older, non-compliant tankers into aforementioned sanctioned trades.

Vintage tonnage is typically sold by larger, more commercially visible shipowners to smaller, less-transparent owners who are more willing to use the vessels in sanctioned trades. In the past, Iranian and Venezuelan exports have been the main trades for these owners, but the upcoming EU ban on Russian imports will further boost demand for the global “shadow fleet”.

“Older vessels will tend to be less encumbered with debt or, in many cases, debt free,” shipping analyst VesselsValue said. “Furthermore, they will tend to have niche insurers and be less favoured by top-rated charterers. These ‘soft’ consequences might not present anything new in terms of obstacles or trading considerations.”

Many larger shipowners have recently been trying to offload older tonnage ahead of the regulations, and they have been met with strong demand for shipowners who presumably will use the ships for sanctioned trades. September was a record month for tanker sales and purchase transactions, according to Shipbrokerage BRS, with 61 units changing hands for future trades. This included a “significant volume of vintage tonnage,” including seven VLCCs, five Suezmaxes and eight Aframaxes —“… all of which would make good candidates to eventually haul Russian crude.”

How the alphabet soup is made 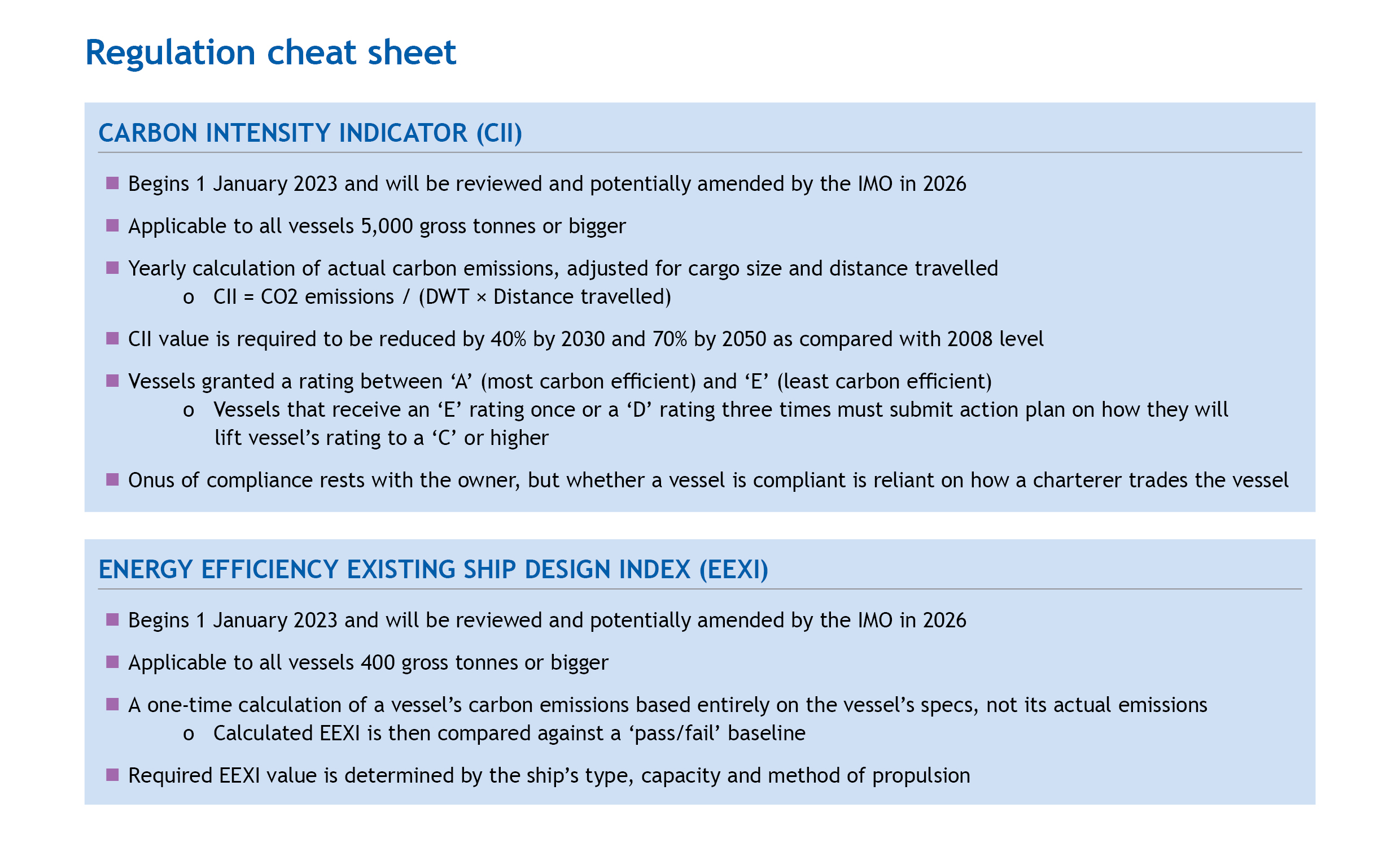 The CII will require vessels over 5,000 GT to each year calculate and submit an Annual Efficiency Ratio (AER), which is the amount of carbon dioxide emitted divided by the product of the cargo capacity and distance travelled. Vessels will be assigned a rating based on their performance, ranging from ‘A’ (most carbon efficient) to ‘E’ (least carbon efficient). Vessels that are assigned an ‘E’ rating once or a ‘D’ rating three times must submit a plan for how they will lift their CII rating to a ‘C’ or higher.

The EEXI, like the CII, is a calculation of CO2 emitted adjusted for cargo size and distance travelled. But unlike the CII, the EEXI is for vessels over 400 GT, is calculated just once in a vessel’s lifetime, and is not a measure of actual emissions but of potential emissions based purely on the design parameters of a vessel. Vessels’ EEXI rating are then compared against a baseline.

EEXI is a more straightforward regulation because the burden of compliance rests solely with the shipowner, but CII is more complicated because compliance is partially determined by how the vessel is traded. “Under a spot voyage, it is the owner’s obligation to manage the vessel’s performance to attain the CII rating the owner desires,” shipbrokerage Gibson said. “However, under a time charter, the situation could be much more complex. Given that CII ratings are retrospective, a vessel on time charter could be traded inefficiently and returned to the owner with an inferior rating, putting the owner at a commercial disadvantage following the charter.”

Medium Range (MR) clean tanker freight rates from northeast Asia have fallen from their record highs in late September on reduced spot activity, as many participants were away for the week-long APPEC conference in Singapore during the same period. But what are the short...