Ask natural gas producers in the US’ prolific Appalachian region what keeps them from raising output and they will no doubt point to the lack of pipelines flowing from the Marcellus and Utica shales. There’s always fresh demand cropping up somewhere, and markets outside of the basin are always more lucrative, but they remain just out of reach.

Producers have been more than willing to grouse about expansion project authorization delays from the US Federal Energy Regulatory Commission (FERC) that keep them going back to the drawing board on their supply contracts. So it is no small wonder that they breathlessly anticipate pipeline expansion start dates like children at Christmas eve; visions of FERC start-up authorizations practically dance in their heads.

So it was with Williams’ 1.7 Bcf/d (48mn m³/d) Atlantic Sunrise project, which spans 183 miles (295km) from northeast Pennsylvania through the state to Transcontinental Gas pipeline’s mainline. It effectively creates a shortcut for Marcellus shale gas to reach the new Cove Point LNG export facility in Maryland — and more lucrative markets overseas as well as further down Transco’s mainline in the Gulf coast. 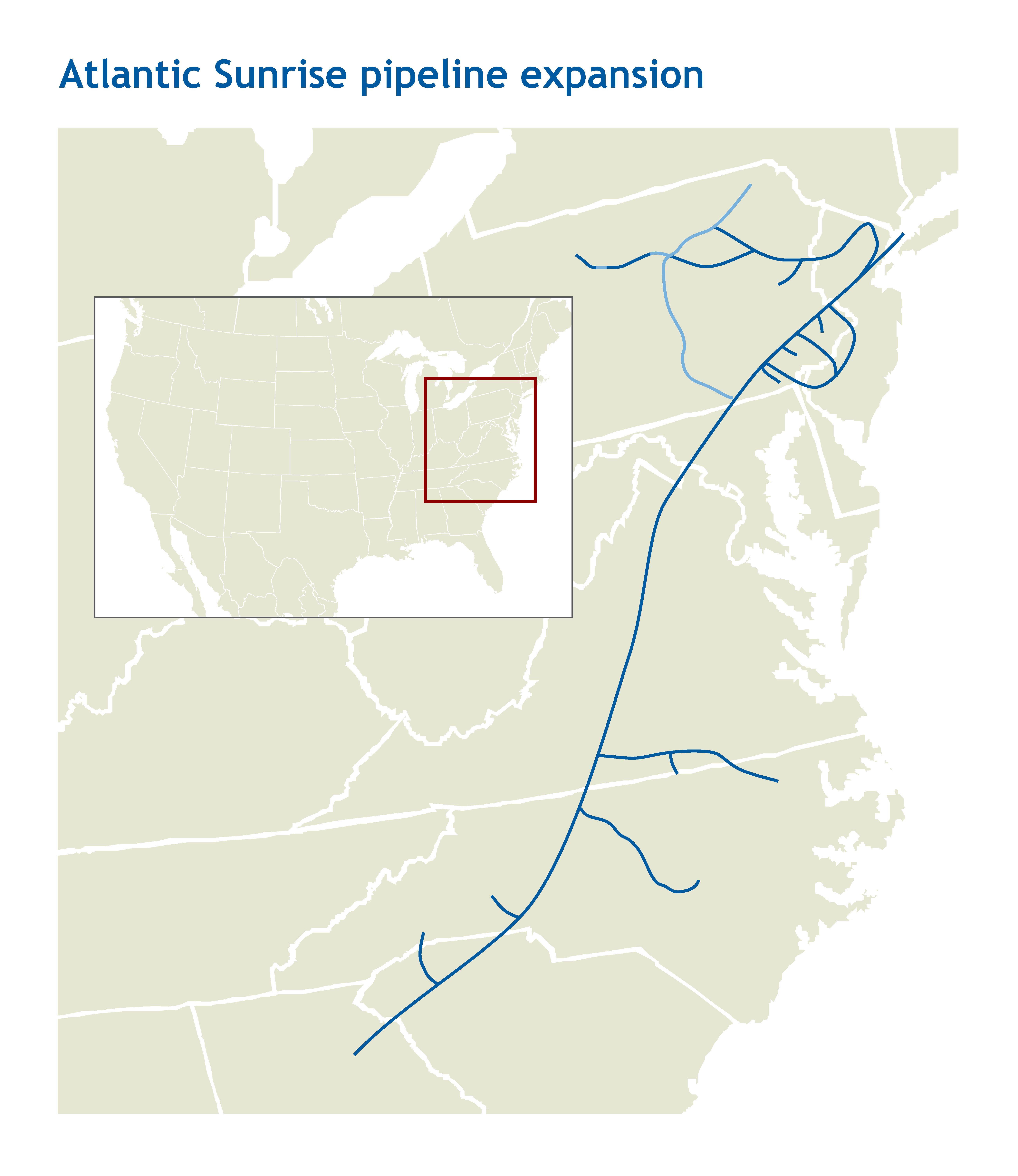 Top producers operating in northeast Pennsylvania — an area where gas previously had no easy path to market centers — eagerly awaited the project's full in-service date, with one producer lowering output guidance after FERC stalled on approving its full start-up. The expansion began partial flows of 550mn cf/d in June, and was ready to ramp up to full capacity in August but did not receive FERC approval until early October.

At least all that delayed gratification had a pretty big payoff. Spot prices at the Leidy Line index on 6 October through 30 November averaged $3.46/mmBtu, up by half from their prior 38-day period value, and more than double their year-earlier average of $1.43/mmBtu. The index topped $4.58/mmBtu last month, an 11-month high and the highest price level reached there without the support of an extreme winter cold event, such as experienced in January 2018 and in January 2014. 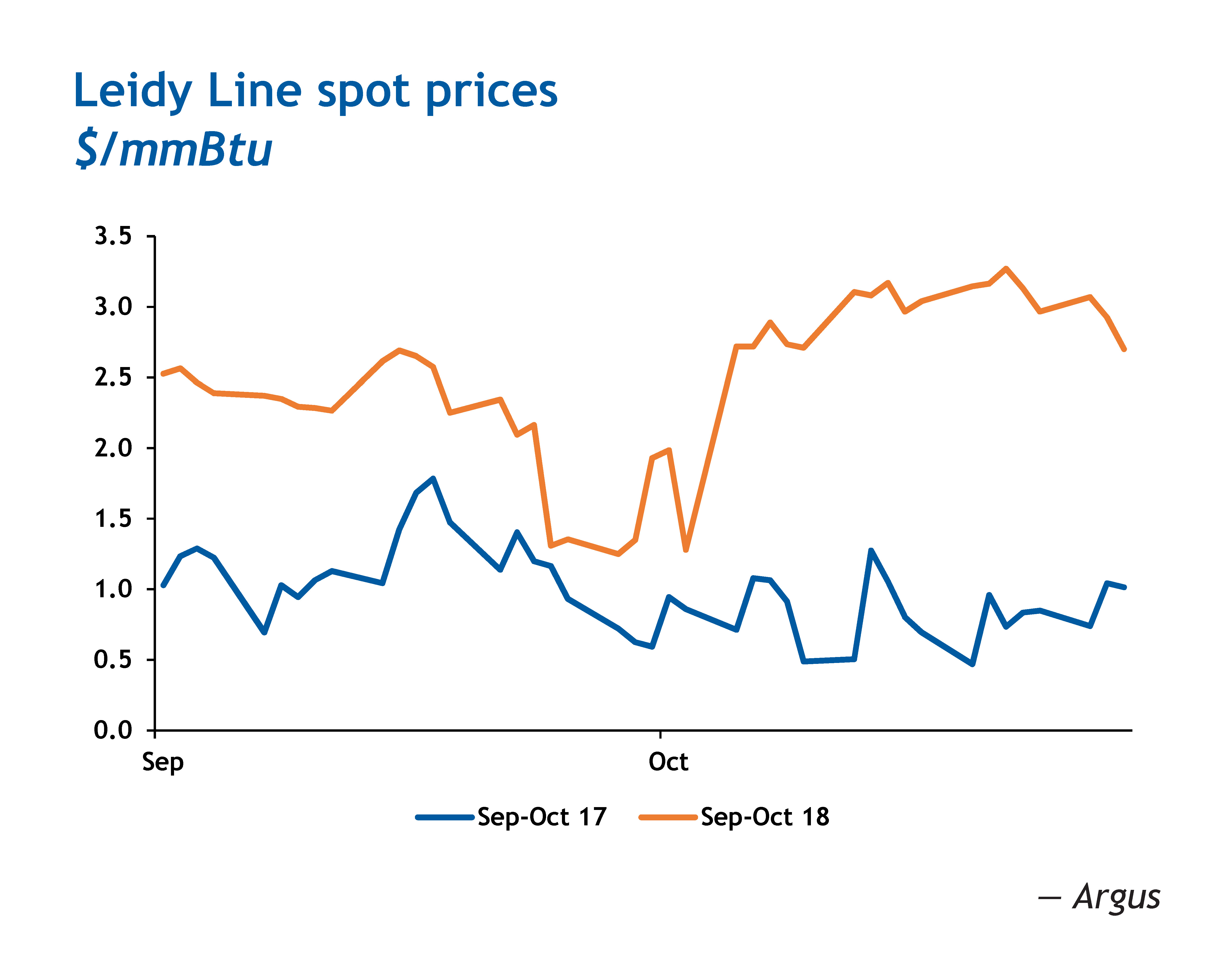 Cabot Oil & Gas is contracted for 700mn cf/d on the project and reported its realized prices more than doubled once Atlantic Sunrise started flowing. And Range Resources reported higher in-basin pricing driven in part by the project.

Williams is now planning an additional 580mn cf/d project known as Leidy South that will ferry more northeast Pennsylvania gas to mid-Atlantic markets. Cabot has committed to about 250mn cf/d of capacity on that expansion, which is targeting an in-service date during the fourth quarter of 2021 — perhaps just in time for Christmas.

Shoulder season more than just a shrug for US northeast gas

Surprisingly high demand for natural gas during the typically ho-hum fall shoulder season in the US northeast combined with new pipeline expansions to boost prices as much as 87pc above year-earlier levels.

BP’s annual statistical review highlighted the growing correlation between global gas markets, but the Henry Hub is not yet providing the price floor. Northeast Asian and European gas markets are already closely connected and their correlation with US gas prices has ...