Markets are still reeling from higher oil prices amid the ongoing conflict in Ukraine, and Europe is looking to US producers to fill the gap left by Russian crude.

Welcome back to Argus’ monthly blog: The US Crude Export Chronicles, by deputy crude editor Amanda Hilow, joined this month by reporter Zach Appel. Come back every month for a recap on US crude exports and how they are faring under volatile global conditions.

The global oil market has been split into two camps since the Russia-Ukraine conflict escalated in late February: bargain hunters — companies content to buy discounted Russian crudes — and buyers seeking an alternative, for fear of crossing sanctions and the reputation hit that they could take from inking a deal with Russia.

Expectations were that the conflict in Ukraine would damage Russia’s ability to find buyers for its oil, and this was compounded after several countries including the US, UK and Australia imposed bans on Russian crude and products imports. But flows have yet to see any major impacts as most importers take advantage of the near-term cooling off periods provided by countries that enacted sanctions, such as the 45-day window the US allowed for companies to wind down energy-related business with Russia.

In the meantime, India and China — our classic bargain shoppers — have had no compunctions about consuming discounted Russian oil with an additive of international scorn. And now Indonesia’s Pertamina, which has not imported oil from Russia in over four years, is eyeing Russian supply at the current price tag.

But Russia’s role in the global market may soon be confined to Asia-Pacific deliveries, with energy watchdog agency IEA predicting the country will have to idle 2.5mn bl of oil exports as a result of sanctioned trade elsewhere. Even if India and China continue buying exorbitant amounts of discounted oil, Russia could still need to idle 30pc of its export capacity in the face of a European market set on finding alternative supplies — even if that means going to net-zero carbon in the case of the UK.

US flows to Europe increased in January, but a difficult arbitrage caused US exports to bypass the Rotterdam port hub in the Netherlands. Imports to that country — which were expected to rise in the month — instead fell by 60pc.

The French-Mediterranean port complex Fos-Lavera tripled its intake to 280,000 b/d of January loadings while exports to the Netherlands sank to 113,400 b/d amid the difficult-to-work arbitrage. Rotterdam is likely the most liquid trade, import and transfer hub in Europe, where many of the eastern countries in the region take their crude. Gas-to-oil switching in late 2021 and early 2022 supported light sweet US crude flows to Europe, but more shipments appear to have been delivered directly to the destination countries in January amid high delivered prices at Rotterdam.

Flows to Rotterdam are poised to regain their losses by the second quarter as many European refiners turn to the US to fill the gap left by Russian supply.

Bellwether WTI averaged a roughly $3/bl premium to Ice Brent on a waterborne basis at the US Gulf coast during the April US trade month, which concluded 25 March, after hitting a record high premium near $5.20/bl the week following the initial events in Ukraine. This reflects a roughly $1.30/bl increase against the international benchmark compared to the March trade month, underpinned by a higher global call for US crude oil. 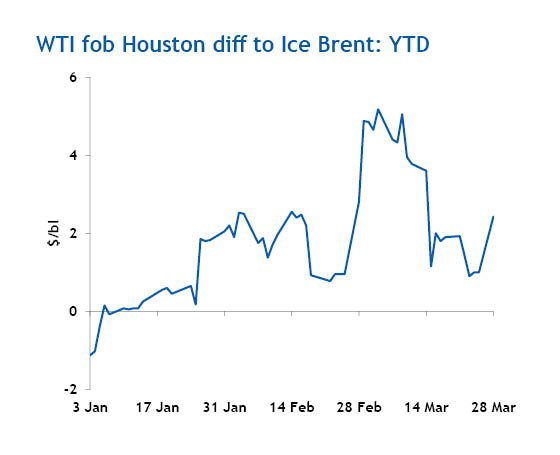 US medium sour Mars is also positioned as a key alternative to Russian sour Urals crude, which remains highly popular in countries like India and China. A shift toward Asia-Pacific for Russian crude grades has created a gap in Europe, likely to be filled by similar-quality crudes from the Americas.

The first Mars cargo to Europe for this year has already departed this month, ahead of two cargoes of medium sweet Liza crude from Guyana planned for April. Liza has only been shipped to Europe one other time before this year.

Meanwhile, Opec+ is sitting on the sidelines for this crisis. Despite calls for Opec+ to raise their production levels above the current 400,000 b/d monthly increment, ministers are adamant that the latest oil price hike is driven by politics and not fundamentals. The organization will meet again at the close of the month, with no signals it plans to deviate from the original plan.

Argus is watching, as always, how markets will play out amid heightened geopolitical tensions and a pending recovery from the worst of the Covid-19 pandemic. Come back again next month for an update on the role of US crude exports in volatile global markets. Until then, it’s (less than) smooth sailing.

The US Crude Export Chronicles: February 2022

The US Crude Export Chronicles: December 2021

Crude prices have regained some of last month’s losses, but growth is limited near-term amid surging cases of the Covid-19 Omicron variant and a looming global crude surplus in 2022.