But in the long term, the return of Libyan crude could be negative for Aframax tonne-mile demand, and therefore for freight rates, by reducing European refiners’ need to import crude from further afield.

Libyan crude exports stopped in January, when state-owned NOC declared force majeure after the Libyan National Army (LNA) ordered operations at central and eastern ports to stop. The stoppage continued until September, when an agreement between the LNA and rival Government of National Accord, and tribal factions, paved the way for the force majeure to be lifted and production to resume.

Production has recently recovered to 1.25mn b/d, similar to levels before port and field blockades were imposed in January. And production of the flagship Es Sider grade, a light sweet crude, is scheduled to rise by almost 35pc month on month in December.

Before the blockades in January, around 76pc of Libya’s crude-oil was transported to regional destinations, with over 80pc of these cargoes carried on Aframax vessels, according to Vortexa. This equated to an average of around 35 Aframax loadings a month in 2018 and 2019.

The sudden loss of this demand weighed on Aframax freight rates at the start of 2020. A busy December 2019 CPC Blend programme, tight vessel availability and Turkish straits congestion saw cross-Mediterranean rates finishing 2019 at a five-year high of $16.42/t. But by 7 February, they had fallen by 68pc to $5.15/t.

Predictably, the return of Libyan demand from September buoyed the Aframax market, even though these gains were short-lived, as the pick-up in Libyan demand was insufficient to offset the general reduction in demand for oil transportation in 2020. Since the beginning of October, around 38 Aframax vessels have loaded in Libya, and this increased demand helped to lift cross-Mediterranean freight rates — which had settled at $4.23/t for over a month — by 15pc to $4.97/t on 16-28 October. Rates have now returned to their pre-October level as wider oversupply hits home.

In the long term, the restart of Libyan exports could actually reduce tonne-mile demand for the vessel class, and even weigh on rates further. In the absence of sweet, light crude from Libya, European refiners sought similar supplies from elsewhere. The largest beneficiary was the US — the US’ share of light sweet crude imports at the eight ports that were the largest importers of Libyan crude has more than doubled to 31.3pc in 2020 from 15.1pc in 2019. The volume of US light sweet crude shipped to these eight ports is up by 33pc on the year in 2020, despite a decline of over 30pc in total European crude receipts linked to lower refinery runs, according to Vortexa.

Imports of Nigerian light sweet crude through these ports has also risen, although the outright numbers are considerably lower than those from the US, while exports from Nigeria are mainly handled by Suezmaxes. 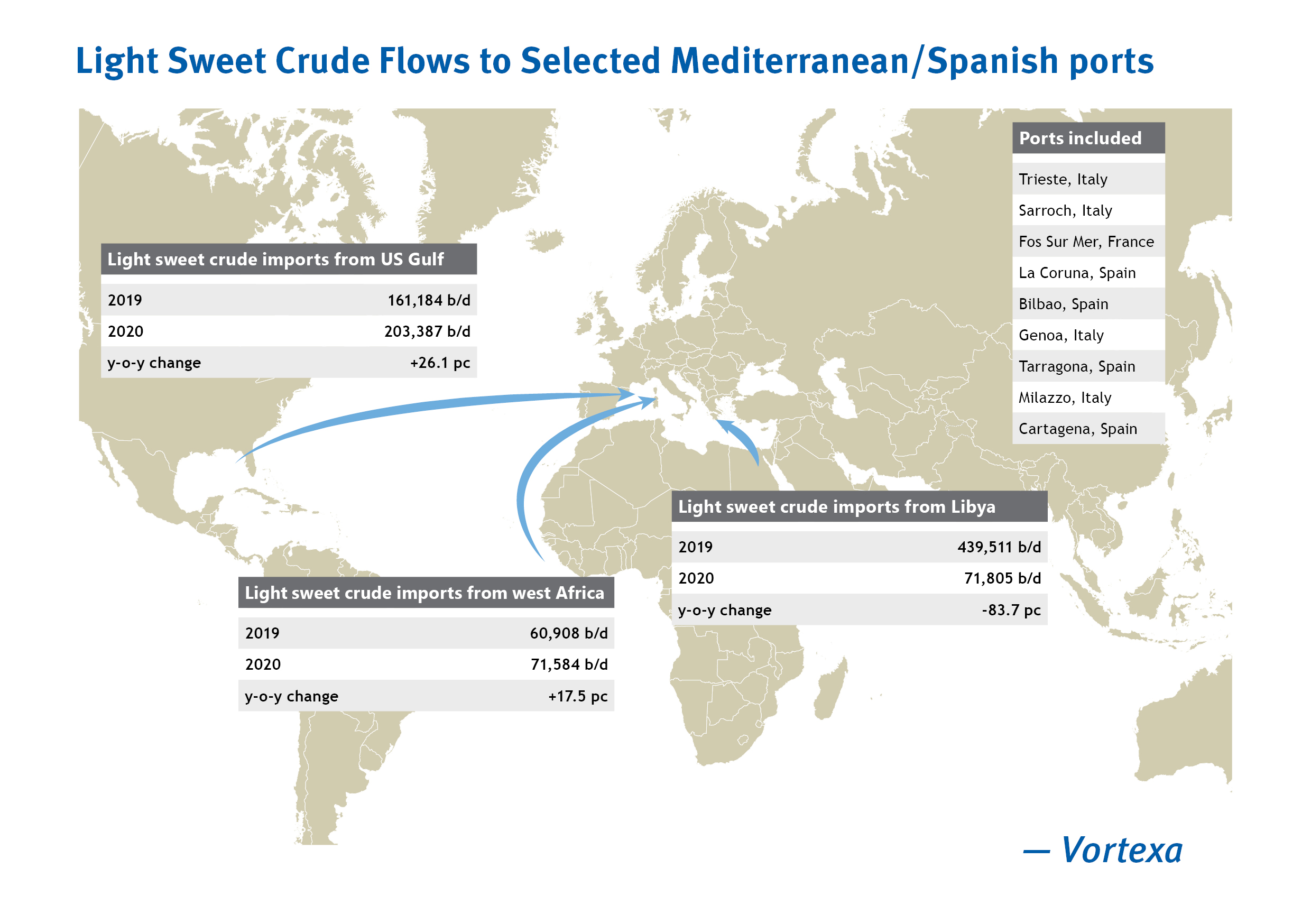 Charterers use Aframaxes for most US-Europe crude shipments, and the longer journey time compared with cross-Mediterranean voyages from Libya means much higher tonne-mile utilisation per shipment. The trip from the LOOP terminal on the US Gulf coast to Trieste, Italy — the largest single importer of Libyan crude — takes almost 23 days at 11.5 knots, according to Vortexa, so a round trip including loading and discharge could take around 48 days, even without delays.

For comparison, a round trip from El Sider, Libya, to Trieste would take around 10 days. If Libyan production continues to climb, it will increase liquidity on the Mediterranean Aframax market, but it could reduce demand for long-haul shipments from the US and diminish tonne-mile demand for the Aframax segment as a whole.

Crude imports from the US and Nigeria have declined since Libyan production restarted, although it is unclear if these have been displaced by Libyan barrels or whether this is simply an effect of renewed lockdowns in Europe impacting refinery runs. The political landscape in Libya also remains volatile and market participants appear cautious about the long term stability of exports from the country.

But assuming that exports are sustained, it is unlikely that refinery throughputs will rise sufficiently in the short term to accommodate similar import levels from the US Gulf and Nigeria, on top of the return of Libyan crude. The European refining sector is facing structural oversupply and possible closures, with low margins resulting in many companies’ refining arms making a loss in the third quarter.

The restart of Libyan crude is one factor affecting the Aframax outlook. The return of Libyan cargoes to the Mediterranean Aframax market has driven demand for this tanker class, improving the employability for such vessels in the region. However, with longer-term fundamentals still uncertain, the potential drop in tonne-mile demand could end up weighing on Aframax freight for some time to come.

Fundamentally, demand is limited by the Opec+ cuts, which are scheduled to ease from the beginning of 2021. A full Opec+ meeting to discuss whether to extend current output cuts into next year was due to take place on 1 December, but has been rescheduled to 3 December.

Global crude demand is forecast to rise by 5mn b/d next year, after an expected 8.9mn b/d decline in 2020, and shipping companies including Tsakos Energy Navigation cite elevated demand in China and India caused by “aggressive industrialisation” as grounds for optimism. But a 3 to 6-month extension to the Opec+ cuts has also been mooted, which would delay any pick-up in tanker demand.

Opec+ ministers will meet w/c 30 November to discuss next steps for their production agreement, the decisions of which will obviously have impacts on global crude oil trade flows.