The Aframax tanker market outlook looks quite bleak for the rest of 2021. Struggling ton-mile demand and uncertainty around the global pandemic are weighing heavily on the overall sentiment for the market. Extra pressure is coming from the abundance of tonnage in both Aframax and Suezmax fleets in the region, while rising bunker costs actively eat into shipowners’ earnings. So how bad is it, and is there a recovery scenario behind all the doom and gloom?

How bad is it?

When we look at the health of the tanker market in 2021, it is important to put it into proper perspective. Comparing it with the previous year may be a bit inaccurate, as 2020 proved that two black swan events that no one saw coming.

So, while 2020 offers a nice contrast with its dramatic spike in tanker rates which were fuelled by the onset of the Covid-19 pandemic, and a steep oil contango, 2019 better reflects a market driven by general fundamentals.

However, even comparing to the milder 2019, east of Suez Aframax rates fell considerably in the first half of 2021. For example, the Southeast Asia to East Coast Australia route dropped by 23.1%, while shipping ESPO crude from the Russian port of Kozmino to North China got cheaper by 30.9%. 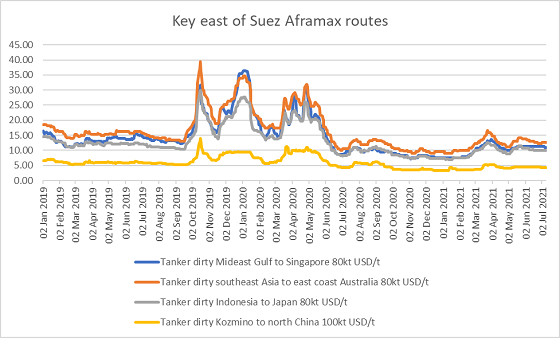 And the fall in rates happened despite higher bunker costs. With the IMO 2020 regulation now in force and the price of crude on the path to recovery, the fuel bills got much higher for shipowners. For example, the average price of very-low sulphur fuel oil (VLSFO) with 0.5pc sulphur content in Singapore in the 1H of 2021 was $78.78/t higher than the average price of high sulphur fuel oil (HSFO) with 3.5pc sulphur content prices in 1H 2019, which was the major fuel burned by vessels before the new sulphur cap arrived in 2020.

In a strong, or at least recovering market, shipowners would be able to cover increased bunker costs in the form of higher freight rates. The fact that they struggle to do so further underscores the fundamentally weak position that they’re in.

The reasons behind the depressed state of the Aframax market are brutally simple. Without the sudden geopolitical shocks to prop them up, the freight rates are left at the mercy of long-term supply and demand fundamentals. And so far this year, things have not been looking good.

In the Asia Pacific, depressed cargo loadings from the southeast Asian region led to lower Aframax tanker demand for both southbound and northbound shipments from the region.

For example, southbound shipments to Australia’s east coast had been on a declining trend even before the global pandemic. Competition from newer refineries in the region pressured Australia’s ageing refineries, like BP’s 146,000 b/d Kwinana refinery and ExxonMobil’s 90,000 b/d Altona refinery converting into oil product import terminals which halved domestic production and in effect, crude demand.

Aframax shipments from southeast Asia to north Asia also fell on declining crude demand and oil product consumption from 1H 2021 lockdowns in major refining markets including Japan and South Korea. Demand from major oil importer China also weakened in 1H 2021 from due to high domestic stocks. This coincided with an influx of readily available, cheap Iranian crude, which consumed most of the allotted import quotas for independent refineries in Shandong.

Also, since a lion’s share of Iranian barrels going to China tends to be carried on VLCCs and Suezmaxes, they offer limited ton-mile demand to Aframaxes in the region.

This competition between vessel classes is also likely to mute the impact of the anticipated increase in Opec+ production. In particular, the larger Suezmaxes that has also been suffering from low rates tend to grab Aframax cargoes from the Middle East, either by taking partial load or topping up to a full 130,000-140,000 t parcels. As long as cheap Suezmaxes remain a viable alternative, any recovery for the Aframax market will be capped.

So, despite the gradual unwinding of Opec+ cuts, with around 4mn out of the original 9.7mn b/d cuts from May 2020 back as of July, the $/t rates on the Middle East to Asia 80,0000 t route stayed depressed at an average of $10.16/t in the first half of 2021 and the prospects for recovery remain limited.

With demand faltering, Asia Pacific remains consistently oversupplied with Aframax tonnage. There is little incentive for shipowners to reposition vessels into other loading regions like the Middle East, as the Aframax market remains weak across the board.

Rough waters ahead for tankers

Looking ahead to the second half of the year, a turnaround in fundamentals seems unlikely in the immediate future as the balance of market forces is still tilted against the shipowners.

Despite a recent impasse between Opec+ majors Saudi Arabia and UAE, the gradual unwinding of Opec+ production cuts are still expected to continue throughout the second half of the year.

Coupled with the potential return of up to 1.5mn b/d of Iranian oil, this could provide a considerable boost to tanker demand from the Mideast Gulf. However, the resulting support for freight rates might be less exciting than some may hope.  This is especially the case for Aframaxes in the East of Suez, where a long backlog of bigger vessels may easily swallow the extra barrels.

Another spanner in the works is the continuous uncertainty in economic recovery due to the rising threat of the Covid-19 delta variant and the rise of infections in the Asia Pacific.

For example, Indonesia recently extended its Covid-19 lockdown to more areas of the country and Australia also extended its lockdown in its largest city Sydney until 16 July. At the same time, Japan re-imposed a state of emergency in Tokyo till 22 August following a resurgence of Covid-19 infections, and South Korea has entered level 4 Covid curbs – short of a full lockdown – after a recent surge in infections in early July.

And in China, crude imports may also be curbed as China's top economic planning agency the NDRC started clamping down on the trading of unused quotas from late May, which drastically limited the ability of independent Chinese refiners to take crude beyond their allocated allowances.

Shandong’s independent refiners boast 3.4mn b/d of crude unit capacity, but crude import allowances granted by China’s Ministry of Commerce only totalled 1.4mn b/d for 1H 2021. And the second batch of crude import quotas for the year released in late June was smaller than the first and saw several refiners getting considerably reduced quotas, comparing to 2020.

With Asia Pacific demand set to remain subdued in the second half of the year, the overhang of the Aframax fleet is likely to persist. The tonnage capacity should be sufficient to supply any increased exports from the Middle East with extra ballasters, making any rallies in rates short-term for the remainder of the year.

As increasing and more diverse light sweet Denver-Julesburg (DJ) crude volumes are delivered into Cushing, Oklahoma, from the Rocky Mountains, a need for better pricing has become all the more important.

Indirect talks between Iran and the US have not yet resolved disagreements over a roadmap toward lifting US sanctions and enforcing Tehran's nuclear compliance. But refiners are watching the developments closely, and the eventual lifting of US sanctions is expected to t...