In this episode of The Crude Report, Argus Deputy Editor Amanda Smith and Vice President of Business Development Jeff Kralowetz go over the latest update on the Mars infrastructure and how this price has maintained its resiliency.

Jeff Kralowetz: Hello, everyone. Welcome to this edition of The Crude Report. This is our podcast series on trends in the global oil markets, and today, we want to talk about the market effects of Hurricane Ida, which hit the Gulf coast at the end of August, and it was the most damaging hurricane in the Gulf coast since Hurricane Katrina back in 2005.

Specifically, today, we want to talk about the damage that Ida did to the Mars pipeline infrastructure, which delivers medium sour crude from the offshore platforms into the market hub of Clovelly, Louisiana.

So joining us to explain all of this is our deputy crude editor of Argus' crude markets editorial team based in Houston, that's Amanda Smith. So welcome, Amanda.

Jeff: And as Amanda intro-ed, my name is Jeff Kralowetz. I do business development based in Houston.

So, Amanda, maybe the best place we could start is by having you tell us a little bit about how bad the damage was from Ida and what is West Delta-143, which we hear so much about.

Amanda: Sure. So initially, the approach of Ida shut in nearly all of the roughly 1.8mn b/d of offshore crude production in the US Gulf. We saw staff left the platforms, things were shut down. And then Ida, when it came ashore, it went right over Fourchon, Louisiana, which is where the Mars pipeline comes through. Early inspections by air by Shell made it clear that their West Delta-143 platform was down and had suffered damage. This platform - it's at a critical place where there's multiple lines coming together, so from the Mars platform, Ursa, and Olympus. So those come together and meet at that West Delta-143 platform offshore.

Jeff: So let's stop there just a second to be clear. In the weeks after the storm, it was not all of Mars production that was cut off but just the part that flowed ashore through the West Delta-143 platform, and I think you said, Amanda, that's about 240,000 b/d. But now, we have news that some of the crude flow through West Delta-143 has been restored. Can you explain what's going on there?

Amanda: That's right. So Shell said on October 4th that some repairs have been made to the West Delta-143 facility and that they have been able to restart the Olympus platform. So they had previously said that that part would restart sometime this quarter. Now, the Mars platform and Ursa platform production remain shut in. Shell said last month that the part that handles the production from those platforms, so the West Delta-143 A platform, will not be in service until sometime in early 2022.

Jeff: Okay. So that's really helpful. It kind of brings us up to the early days of October in terms of where we are with West Delta-143 functioning. So maybe this is a good time to step back a little bit and talk about, why is Mars such a big deal in the Gulf coast crude markets? What role or roles does it play? 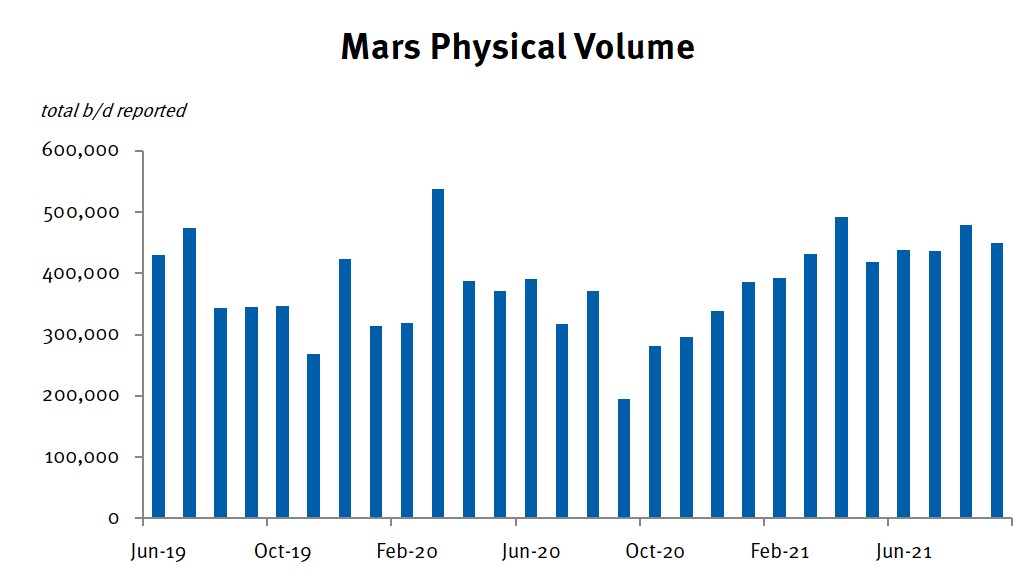 Amanda: So, yes, Mars is a key medium sour feedstock for Louisiana refineries. It's very actively traded in the spot market. It's a transparent market. We see we are able to assess that price readily. There's an active financial contract settled using the Argus Mars price index. It's also one of three grades that's used in the ASCI price for the sour crude benchmark price by Argus. That's part of the official price formulas for the Saudi, Iraqi, and Kuwaiti imports to the United States. And then Mars has also become a popular export grade, mostly through LOOP, to Asia.

Jeff: So it sounds as if Mars is a pillar of the Gulf coast crude markets in a lot of ways. It's part of ASCI, it's an export grade, and it's a key feedstock for the refineries along the Mississippi River. So with all of that said, I'm wondering how Argus continued to publish a daily price for Mars, which is such an important grade, if West Delta-143 has been down and the main platforms producing Mars had to be shut in.

Amanda: There's a couple of things. So we're still seeing spot trade in the market most days. So that's what our price does reflect in terms of actual crude that's flowing into the Mars stream. Shell has said that the Amberjack pipeline is running normally, and so the Amberjack typically puts in, like, 245,000 to 265,000 b/d into the Mars pipeline at Fourchon. There's also Mars crude that would come out of storage. There's dedicated storage in LOOP caverns in Clovelly. So some can also trade out of storage. So we've still seen Mars spot volume being reported nearly every day, and then, of course, we can also look for a methodology to other markets as a guide to help assess it.

So we can look to, you know, like Poseidon or SGC and look at relationships between them to be able to assess if there's not sufficient trade on a given day to assess it with the volume-weighted average for Mars as we typically would do.

Jeff: Great. So there's still plenty of pricing that was in this market. And a minute ago, you mentioned ASCI. Maybe this is a good time to talk about how ASCI has been affected by this situation with Mars.

Amanda: Sure. So the ASCI price is a composite of all trades from Mars, SGC, and Poseidon. Now, when we launched that back in 2009, we designed it with hurricanes in mind, like what would happen if a crude stream was knocked out. So it's actually a volume-weighted average of all the trades each day reported for those three grades as if it were one, you know, they're all on the same basket together, as long as there's a minimum of 6,000 b/d in trade. And the liquidity has still been pretty good. We do have methodology if there's under 6,000 b/d, looking at the assessments for each individual grade and then applying what the past percentages have been. And that's spelled out in our methodology more in detail. But the ASCI price discovery really has continued to be pretty robust despite the hurricane damage and situation.

Jeff: Okay. So thanks for that. I think it's helpful to understand exactly what methodology we use in coming up with ASCI. So recently, I mean last night, I charted Mars price relative to Nymex-Cushing, and it's actually declined a bit in the last few days, which intuitively sounds a little strange for a grade that has had half of its supply cut off. What's going on with that? 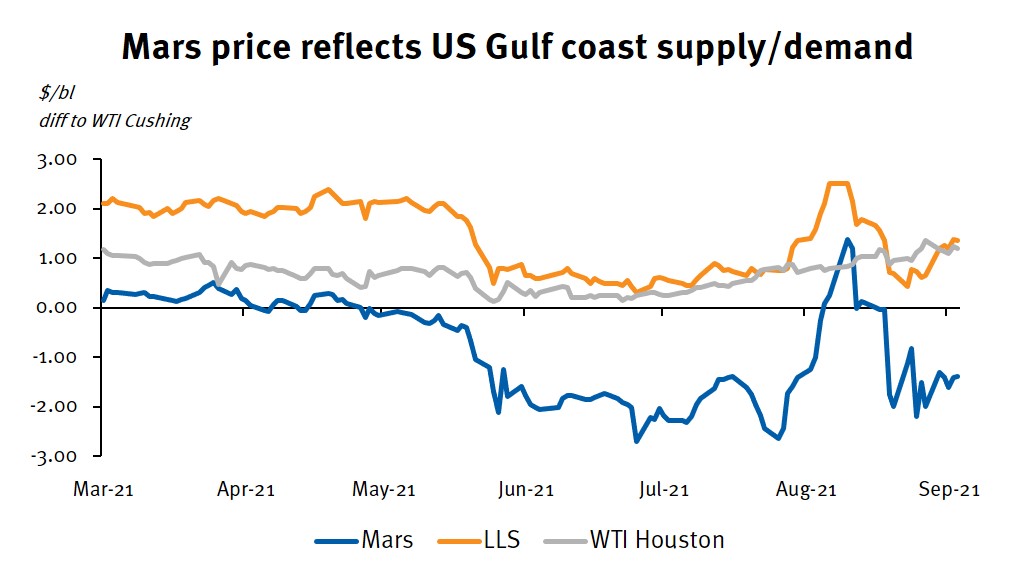 Amanda: So there's a few things that have, I guess, weighed on that price. So initially, there was an emergency release from the Strategic Petroleum Reserve, the US Strategic Petroleum Reserve (SPR). It was 3.3mn bls, and so 3mn of that is sour. So that was directly for refinery that is impacted from the hurricane. There's also already planned 20-mn bl SPR release, which is sour crude, that's going to be delivered on October, November, and December. So that's also a factor. So maybe before some of that perhaps would have been exported or other could have been exported, but now, it'll be able to meet some of the shortfalls from so much Mars production being online. And also, the price signals, with the Mars being stronger earlier, actually prompted some Russian Urals to come. So there's two cargoes, two Aframaxes on the way right now, Russian Urals, that are expected to reach LOOP in mid-October. So that's about 1.5mn bls in two Aframaxes. And then there was one that already unloaded around September 20th, and it had been originally expected to discharge in Corpus Christi. And then it switched paths and went to LOOP and offloaded at LOOP.

Jeff: You know, I always have my eyes out for impacts on Canadian crude. You mentioned Urals, you mentioned the SPR release, but are there other grades that can substitute for Mars while the Mars supply is kind of impacted here?

Amanda: There are different options and different things that can be done. So there's other Gulf Coast grades like Poseidon or even lighter grades like Thunder Horse or Bonito, and there's different tweaks that the refineries can make. We know that when there were issues with Southern Green Canyon like a year or so ago that we saw refineries blend heavy Canadian with light crude to kind of create a substitute SGC. So it's possible something like that could be done for Mars as well. We could see an increase in Basrah, or Saudi grades, or Kuwaiti, Brazilian heavy sweet, Colombian grade. So we could see refineries increase their nominations for certain barrels, or we could see different blends being made from different components to kind of make up for that shortfall.

Jeff: Okay, thanks. I think that completes the picture pretty well. We are running out of time, but, Amanda, I want to give you a chance to answer a question about what we should expect to see in the future for Mars. As you mentioned, some of the flow through West Delta-143 has now been restored, and we expect the rest of the flow through that platform to be restored sometime throughout the first quarter of next year. But looking even beyond that, what do you think the role of Mars is going to be going forward?

Amanda: Sure, Jeff. So we have every reason to believe that the Mars price will continue to be widely used and that it will function as a solid regional benchmark. And it's going to be exported again when the arbitrage supports that. The price indications will continue to be important. The Argus Mars price, it's actually being used as the price in the formula for the SPR sale for the 20 million barrels of SPR sale. So we really do think that Mars is just going to continue being a strong secondary benchmark for the Gulf Coast.

Jeff: Okay. Well, thank you very much. This has been a great kind of context builder for what's going on at the Gulf coast after the storms. So I thank you for that.

And I want to remind those who are listening that Argus has, of course, daily coverage on all of this, in both an international and our Americas crude reports, but we also have a suite of other crude-related services like the Latin Markets report, a logistics publication called Petroleum Transportation North America, we have daily waterborne freight report, a weekly global markets report that looks at the arbitrages globally for crude and refined products and what are the fundamentals that feed that. So there's lots of stuff that we could tell you about. And so please don't hesitate to be in touch with us, or check out our website at argusmedia.com for more information about that. And also please join us again for another edition of The Crude Report.

The Crude Report: ANS flows across the other, bigger pond