Just as a re-emergent energy policy trilemma complicated Cop 27 negotiations, so a looming liquidity trilemma may embed extra volatility in the crude market over the festive season and beyond. Much depends on decisions to be taken by Opec+ ministers and their G7 counterparts in the coming days around output policy for early 2023 and a price cap for Russian oil. Any resultant tightening in market supply will vie with interest rate rises and recession risks for market headlines.

Crude volatility will be with us into December and beyond, driven by a confluence of impending decisions by Opec+ ministers, G7 policy makers and the US Federal Reserve’s Federal Open Market Committee (FOMC) in the first half of the month. After the UN Cop 27 climate conference in Egypt, much attention centred on a rediscovered “energy trilemma”, and its perceived role in diluting efforts to accelerate climate change mitigation measures. The crude market now faces its very own liquidity trilemma, as imminent further tightening in monetary policy bumps up against potentially restricted physical oil supplies.

Opec+ producers meet this Sunday to assess production policy for early 2023. The group lowered its production ceiling by 2mn b/d on 1 November, despite appeals from the US for sustained supplies to the market. Opec+ ministers are likely to have one eye on rapidly decelerating economic activity among the G7 nations and China, which is likely to result in anaemic 2023 global GDP and oil demand growth at best. The past week has seen market rumours of further supply cuts from January as a pre-emptive measure to place a floor under Ice Brent, which has tumbled by $14/bl in a month. The organisation always denies working to a specific price target, but $80/bl may be the new $90/bl in a recessionary environment such as this. However, the last-minute shift from an in-person to a virtual Opec+ meeting suggests the group could, in the end, delay major policy change until it can digest the impact of upcoming G7 and US Federal Reserve decisions.

Opec ministers’ task is complicated by so far inconclusive negotiations between G7 member states on where to pitch their impending price cap for Russian crude sales. The cap is a measure designed to dilute the impact on global trade flows of the EU’s embargo on Russian crude purchases and its associated ban on providing maritime and insurance services for cargoes destined elsewhere, which together come into force on Monday 5 December. At the time of writing, no decision has been taken by EU member states on the level for the price cap, despite earlier rumours that ministers were converging on something near $65/bl. On the one hand, with fob prices for Russian Urals crude recently slipping below $50/bl, the price cap may seem an irrelevance. But without a definitive price decision, a significant slice of the 1.5mn-2mn b/d of Russian crude previously sold into Europe potentially gets stranded at Russian ports. 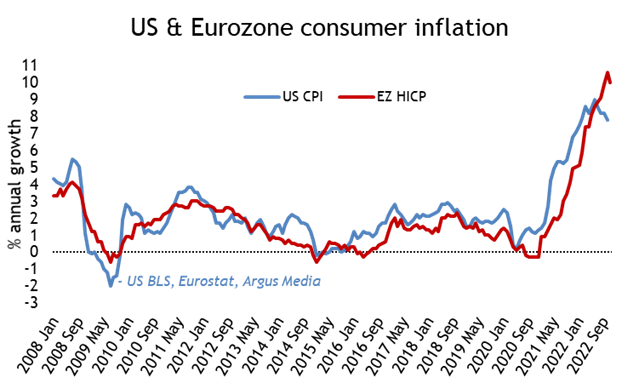 While Opec+ and G7 policy decisions have gone right down to the wire, greater certainty surrounds the likely stance of the US central bank’s FOMC, now believed likely to announce a 50 basis point (bp) rate increase on 14 December. This has been interpreted positively by the market, representing a softening of its hitherto hawkish stance after four consecutive 75bp increases. The S&P500 is up by 10pc from a mid-October low point, albeit weakening in recent days. And some comfort can also be gleaned from recent eurozone and US inflation readings, the former easing to “only” 10pc in November, while the US CPI measure clocked just under 8pc for October. But before the global economy starts celebrating the vanquishing of inflation, it’s worth remembering Fed chairman Jerome Powell’s acknowledgement that although the pace of rate rises may now slow, absolute interest rate levels may have to remain higher for longer before the inflationary battle is truly won. A strong dollar and elevated borrowing costs will surely continue to weigh on activity levels in 2023 for both developed economies and emerging markets alike.

In the end, this is the conundrum that Opec+ ministers face: ensuring adequate supply despite potentially disrupted Russian exports, but equally avoiding a surplus as GDP growth decelerates. Market unpredictability will feature just as prominently in 2023 as it has in 2022.

Find out more about Argus crude

From the Economist's Chair: Are we nearing a dollar inflection point?

As the US dollar index breaches 20-year highs, many foresee an imminent cyclical devaluation, although rumours of the demise of the dollar as the de-facto global currency look premature.

From the Economist's Chair: Watching the storm clouds

Recent commodity market focus has centred on gathering economic storm clouds, with predictions that rising interest rates, burgeoning inflation and European energy crisis could tip the Atlantic Basin, if not the broader global economy, into outright recession. While thi...

From the Economist's Chair: Silver linings for oil demand among the recessionary storm clouds?