A sharp increase in coal prices offset record high dry bulk freight rates in 2021, so there was no increase in the ‘Weight of Freight’ — or freight cost as a percentage of the delivered price of the commodity — for international shippers.


The Weight of Freight in importers and exporters’ final delivered prices fluctuated, with most dry bulk rates hitting multi-year highs at some point in 2021. But despite freight rates being higher on average over the whole year, the average Weight of Freight for coal actually declined because of higher commodity prices. There was a steep decline especially in the Weight of Freight of Puerto Bolivar-to-Rotterdam which decreased by more than 8pc to 16.3pc. European and South African coal prices were supported by tight global supply and sharp increases in gas and power markets. Higher gas prices made coal more competitive, and demand for thermal and coking coal was much stronger in 2021. 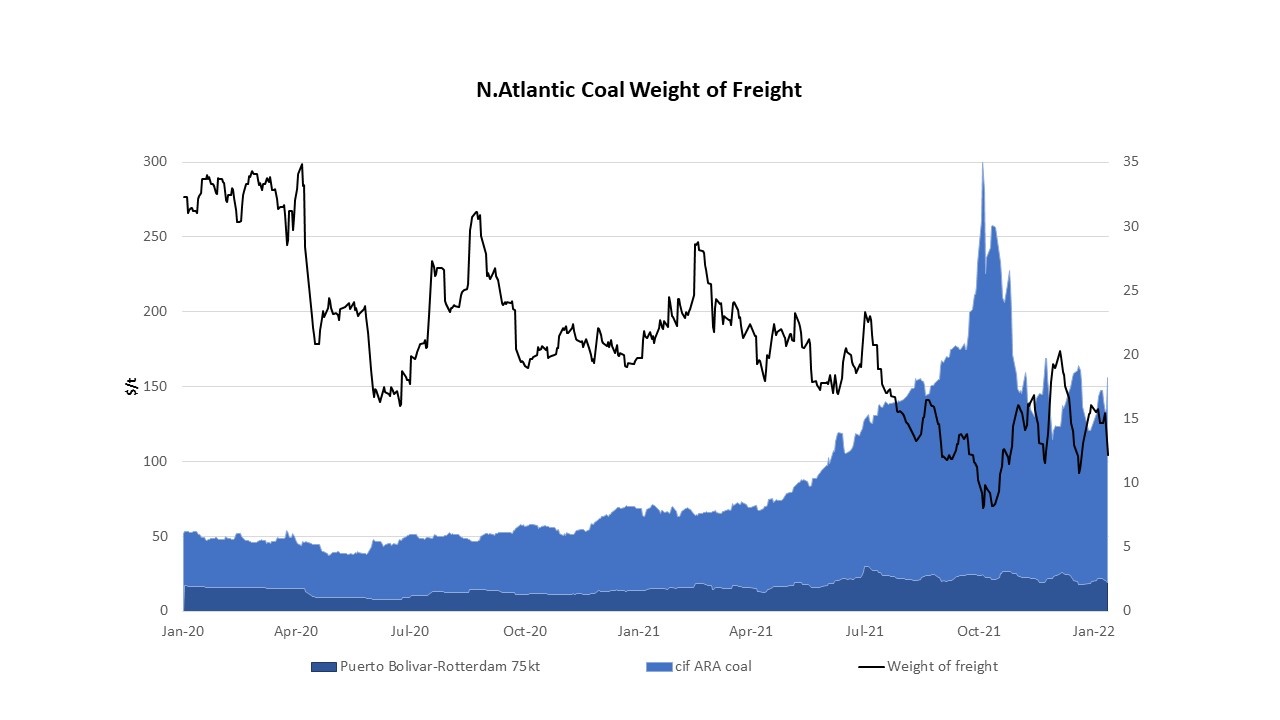 Supply was unable to match demand, with constraints for some major producers. South African coal production fell by 7.9pc on the year in November, with some mining firms scaling back because of problems with rail deliveries and La Nina-related heavy rainfall. This triggered a sharp rise in prices, particularly in the second half of the year.

Heavy rain and floods in eastern Australia also contributed to Newcastle, the country’s largest export port, being unable to increase throughputs. And China’s ban on Australian coal imports played a part in higher prices. In the absence of Australian coal, Chinese buyers have turned to alternative suppliers in Indonesia, South Africa, Russian and Colombia for their requirements.

In 2022, the Weight of Freight has declined even further. Global coal prices have continued to climb, while freight rates have come under downward pressure.

Chinese steel manufacturing cuts and weather-related iron ore production constraints in Brazil have combined to reduce Capesize rates, with rates on the bellwether Tubarao-to-Qingdao route falling below $20/t last week for the first time since March. And Asia-Pacific Panamax freight rates have been falling on weaker demand and increased uncertainty caused by Indonesia's ban on thermal coal exports in January.

Weight of Freight: Powering through the pandemic with the Panama Canal’s deputy administrator

This latest Weight of Freight podcast episode focuses on the effects of the pandemic on the Panama Canal, logistical changes made at the canal over the prior year and the increased transit volumes it saw during its 2021 fiscal year.

The dry bulk market has experienced a record-breaking year in terms of freight rates across the Pacific and Atlantic basins. The resurgence of economies post-pandemic, an increase in Chinese commodity demand and vessel supply inefficiencies have all underpinned strong r...

Over a year has passed since China imposed an informal ban on Australian coals. What is China's stance today and what has been the impact on the wider market?