Two stories at the start of July pointed to a large increase in Europe’s gas supply this summer and talk of a “price war”.

But it would be wrong to call this a price war, or even the start of the skirmishes.

Gazprom’s response to a drop in European prices may be to increase supply, but this is not a battle to keep LNG out of the region.

There is some evidence that the Russian firm has a somewhat unorthodox downward sloping supply curve — even before the so-called wave of LNG.

Gazprom’s sales to Europe hit a record high during the winter and while dropping off slightly in the second quarter, they remained up compared with previous summers.

The firm’s sales have increased since the start of 2015, despite oil-indexed and hub prices mostly dropping over this period.

The scatter graph plotting Gazprom’s quarterly sales against an oil-indexed prices since July 2012 shows a clear negative correlation. The lower the price, the more Gazprom sells.

Gazprom — and the firm’s pricing chief, Sergei Komlev, in particular — have regularly argued that this firm is a price taker.

In many ways this is correct. Traditional long-term contracts gave the buyer delivery flexibility, allowing it to increase nominations when gas was cheap.

Another way to look at this is how buyers reacted when hub prices were above the cost of crude-linked gas, such as last year.

Firms can profit easily by selling their crude-linked gas at European hubs at above the cost of their imports. This encourages maximising nominations and Gazprom sells more when hub prices are above oil-indexed levels. 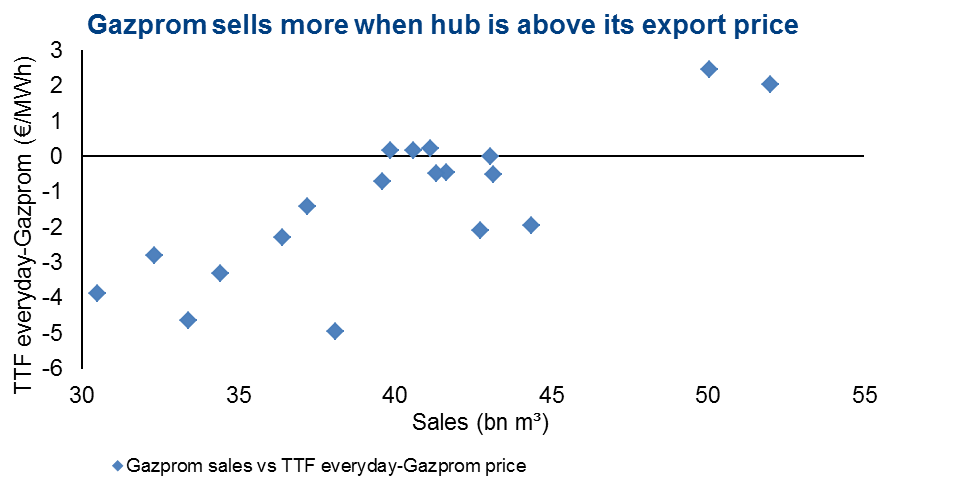 Gazprom’s record sales came during that 2016-17 winter period, when hub prices were above oil-indexed import costs. Hub and crude-linked prices were at levels that encouraged burning gas ahead of coal, allowing a step up in demand to meet the increase in Russian supply.

This makes Gazprom’s sales rising when prices drop look like a legacy of oil-indexed contracts with the buyer having delivery flexibility.

But Gazprom’s export arm plans to take back market power, setting up a new trading unit with two aims. It wants to “earn more from gas sales” and become a “price maker”.

Other sellers have already moved to take back control of the nomination rights, which would allow the producer to adjust output with changes in prices more effectively.

Norway’s Statoil, which regained delivery flexibility in return for hub-indexation, responds to prompt prices moving to a discount to forward contracts by turning down output from its flexible Troll field.

But there could be more to Gazprom’s higher sales it than just the contract structure. While the majority of Gazprom’s sales are under long-term contracts, it also exports to its London-based trading arm, which it records as sales to the UK.

Physical delivery from Gazprom’s export arm to the trading unit takes place in continental Europe. This allows Gazprom’s sales to the UK to be a proxy — albeit an imperfect one — for the firm’s traded volumes, which have increased.

But the firm has more outlets for its trading sales than just the marketing and trading arm. Gazprom has also taken full control of trading firms Wingas and WIEH, which it can use for spot sales, as well as selling more to affiliates such as Centrex.

Gazprom has also started auctioning more gas in Europe, which effectively requires selling at levels that are competitive with hub prices.

And spot sales — to the UK, continental subsidiaries or through auctions — have risen in recent years, despite hub prices mostly falling over the period.

The results are a little ambiguous with an R² of 0.15 and a correlation of minus 0.39, but there is a clear downward trend for increasing supply when prompt prices are lower.

It should be reiterated again that sales to the UK are an imperfect measure of Gazprom’s spot deliveries.

One of the reasons for the rise in Gazprom’s sales to the UK is its “contractual pause” with Germany’s RWE that started in summer 2013 and was extended for three years in June 2016.

RWE buys from Gazprom’s London-based marketing and trading arm at spot prices during the “commercial pause”.  This has resulted in Gazprom recording more sales to the UK and less to the Czech Republic, despite little change in the physical delivery point. But the combined amount to both countries has increased — effectively an increase in spot sales.

The other big signal that Gazprom is keen to maintain high sales — even if this means more spot gas at lower prices — is strong Russian exports during the second quarter.

Sales were a record high for the second quarter despite hub prices dropping below oil-indexed levels. The latest data point is not at outlier, but is towards the edge of the range from previous years.

This would suggest strong deliveries to trading subsidiaries, given that there was little incentive for high nominations by firms with crude-linked contracts.

Tomorrow’s second part of this blog will look at a possible theoretical reason for Gazprom and other commodity producers having an unusual negative sloping supply curve.