China is unique when it comes to sulphur storage, as the key ports of Fangcheng, Beihai and Zhanjiang in the south of the country and the north China ports of Tangshan, Weifang, Zhenjiang and Nanjing have the capacity to hold in excess of 3mn t of sulphur.

And the space at these ports is either owned by sulphur buyers or rented out to those with tonnes in hand that are yet to find a home at end-user facilities.

Between the start of 2016 and early-July 2019, weekly inventory levels averaged between 1.3mn t and 1.58mn t but since mid-July last year, when inventories hit a six-year high of 2.1mn t, they have stayed above this level and even hit the 3mn t mark in mid-February of this year.

Argus inventory records date back to the start of 2012 — prior to July 2019, the longest period Chinese port stocks remained above 2mn t was 21 weeks from 21 February 2013-1 August 2013. With inventory levels currently having been above 2mn t for 45 weeks and over 2.5mn t for 22 of those, it now looks like this is the new normal for China.

Why did inventories build?

Sulphur prices in China on a $/t cfr and Yn/t ex-works basis began to fall in October 2018 in response to softening prices in the phosphate market, which had started on a downward trajectory in July 2018. 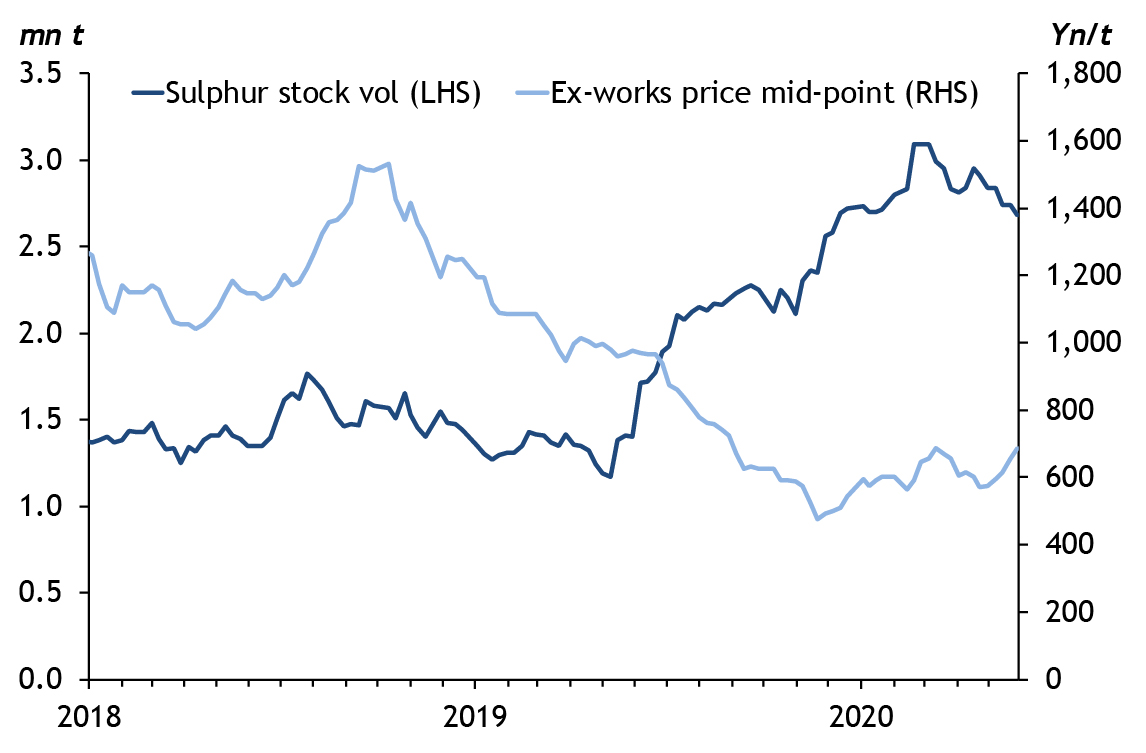 Sulphur prices, as well as phosphate prices, continued to slide, forcing sulphur prices to move away from the cycle of steep fourth-quarter price rises and relatively stable first-quarter prices that had occurred previously.

Poor end-product market sentiment had therefore pushed end-users away from picking up sulphur on the cfr market and purchases from port inventories were minimal, with hand-to-mouth buying becoming the norm.

This buying attitude continued in to 2019, but was largely expected as the lunar new year holidays always reduce China’s buying appetite and the second quarter is traditionally the quietest and lowest-priced quarter of the year for the country as the domestic spring application season is over.

And, because of this prolonged period of low consumer buying, it was broadly anticipated by the sell-side community that end-users would return in force in the third quarter.

So, in April and May 2019, cfr product was purchased in large quantities by Chinese traders for sale on an ex-works basis in the third quarter.

Across this timeframe, China’s cfr price for granular sulphur was trading from $118-121/t cfr on a top-end basis, equivalent to around Yn1,000/t. But when these tonnes landed in China in July, a six-year inventory high of 2.1mn t was achieved, prices had softened on a Yn/t ex-works basis to under Yn900/t and continued to drop almost continually until 21 November, when they hit Yn525/t on a top-end basis.

As prices dropped, sales from port inventories did not pick up, particularly as buyers had not moved away from taking tonnes on a hand-to-mouth basis. Because of this, inventories built up and hit a new 2019 high of 2.72mn t in December.

The increase in inventories was exacerbated by the failure of fourth-quarter contract negotiations between UAE sulphur supplier Adnoc and Moroccan fertilizer producer OCP. Adnoc had delivered at least 750,000 t/quarter to Morocco from 3Q18-3Q19, but with no agreement in 4Q19 just 209,000t was delivered, most likely on a spot basis via traders and as residual third-quarter deliveries.

With global sulphur demand generally weak in the fourth quarter, UAE-origin product was sent to China to be held in the unique “space for rent” at ports as there were no homes in other markets as the period of poor end-product markets continued.

Traders were also turning to China’s port storage to hold sulphur that was struggling to find a home, and this further boosted inventory levels, which topped 2.73mn t at the start of 2020.

Then in 2020, following the general lunar new year holiday lull, the Covid-19 pandemic hit the Chinese market in full force, bringing lockdown measures to much of the country as well as the near halt of many consumer operations.

China’s inventories increased to over 3mn t in mid-February, a new all-time high, and stayed there for three weeks. From mid-April until the end of May, inventories declined steadily as fresh cfr business was minimal as buyers remained cautious amid reduced demand during the Chinese second-quarter lull.

And supply has been moving towards being tight, with refinery-based sulphur production reduced because of the decline in demand for oil products in response to global coronavirus prevention measures.

Regardless of the recent gradual declines in port inventories, they are still healthy and in excess of 2.6mn t. Indeed, there has been limited liquidity in recent months because of the Covid-19 pandemic, but end-user operational rates are at a maximum of 65pc in many cases, which is curbing consumption to an extent.

It is this lack of activity at the consumer end of the market that has spurred confidence in the domestic trader market, similar to April-May 2019. But port inventories are not likely to fall significantly until ex-works prices are nearer Yn1,000/t, as this limits losses for sellers.

Yet inventories are not expected to increase significantly either, as buyers in both the trader and end-user communities remain cautious about securing large volumes on the cfr market at present.

Podcast: Covid-19 and Europe - coping during the key season

The latest update on Europe's Fertilizer supply chain and the impact of Covid-19 during the industry's key season from the Editor of Argus Europe Fertilizer.