Both Opec+ and the main central banks are tasked with ensuring adequate liquidity in world markets. But as the last week has shown, deciding when and how far to move is difficult, not least as their respective decisions now increasingly affect each other’s room for manoeuvre.

Who’d be a central banker or Opec+ Minister? The role of providing adequate liquidity to intrinsically unpredictable markets is a thankless one, as illustrated this past week. Central Bank governors from the US to the UK and beyond faced criticism for behaving like – and I quote - “unreliable boyfriends”, having variously suggested that interest rate rises were imminent, or that a timeline for tightening rates would be spelt out. In the event, bankers resisted the temptation to raise rates or signal precise timelines, amid signs that economic recovery still rests on fragile foundations.Inflationary pressures aside, the combination of spiking winter Covid-19 caseloads, widespread slowing of industrial growth in October PMI data, and a combined power supply and real-estate crunch in China, have all weakened expectations for the pace of recovery in late-2021 and early-2022. 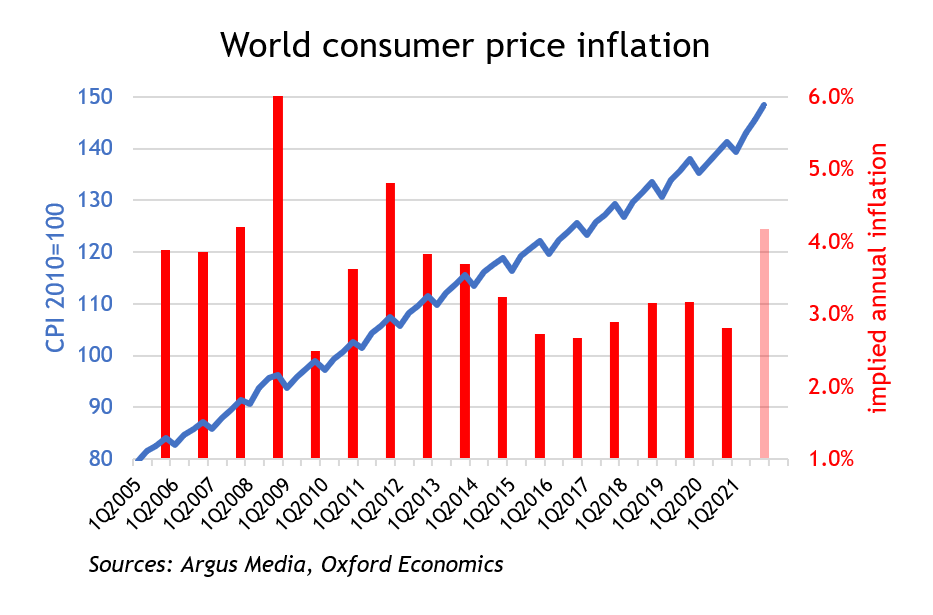 At the same time, Opec+ Ministers last week decided to stick with their plan to increase supplies to the crude market by a scheduled 400 kb/d in December. They therefore resisted calls from consuming countries – not least the Biden Administration in the US – for accelerated supply increases to help deal with a winter fuel crisis, rising pump prices and galloping inflation. Criticism by importers of Opec+ being slow to add sufficient volume to the market was rapid and widespread after the group’s announcement on Thursday [4 November].

Cutting both groups some slack however, the balance they must strike is a delicate one, their role is - by definition - reactive, “adequate market liquidity” is a concept only truly discernible in retrospect, and both their respective toolboxes are comparatively limited in scope. Moreover, both groups’ conviction that recent inflationary pressures are partly transient does contain some merit.

What is clear is that both Opec+ and central banks find it easier to identify a clear course of action when dealing with outright crisis than they do when reacting to gradual economic and oil demand recovery. Renowned oil academic Robert Mabro once famously likened Opec to a teabag, noting that it only works when in hot water. And certainly, both oil producers’ “shock and awe” removal of 10 mb/d of supply from the market in April 2020 on the one hand, and central banks’ expansion of quantitative easing (QE) by $9.1 trillion during 2020 on the other, illustrate the scale of what both are prepared to do in extremis.

That said, neither Opec+ or the Central Banks work in isolation, with their decisions and actions ultimately affecting each other. Opec+ production policy drives today’s crude prices and expectations for both crude and broader inflation in the months ahead. The ascent of crude to $80 a barrel and gasoline to near $4 a gallon in the US may look pedestrian compared to the rollercoaster increases seen for spot international coal and natural gas. But they are nonetheless major contributors to the current surge in consumer price and industrial cost inflation. A continuation of rising fuel prices and broader inflation into 2022 could force interest rate rises sooner rather than later.

Were October’s fuel prices extrapolated globally through next year (admittedly for now an unlikely scenario), they would push aggregate fuel expenditures to levels only experienced in recent memory during 2011, 2008 and the early-1980s. While the energy intensity of economic growth has lessened since then, nonetheless such an elevated “fuel burden” would again weigh heavily on economic growth, just as it did then. High prices eventually remedy themselves, weighing on economic activity and eroding consumer purchasing power. That is not to advocate inaction by either Opec+ or the central banks, rather a recognition that if economic damage is to be minimised, both groups may need to shift their current modus operandi – one way or the other - before too long.

Thank you for listening to this edition of “From the Economist’s Chair” and don’t forget to check www.argusmedia.com for more commodity market commentary and analysis.