Last month’s Argus Fundamentals projections spelt out potential oil demand impacts from a world slipping into outright recession in late-2022 and 2023. It implied demand growth slowing to 1.5 mb/d this year and barely 400 kb/d next year, compared to base case expectations of growth nearer to 2 mb/d for both years. While the recession scenario continues to be held in reserve for now, nothing occurring in the last month from a macro-economic standpoint encourages us to definitively place it back into cold storage. If anything, the signals of sharp global slowdown continue to accumulate.

The US recorded a second consecutive quarter of GDP contraction in 2Q22, albeit a persistently strong labour market has prevented analysts and policy makers from proclaiming a genuine recession. Moreover, this week also saw the release of July manufacturing Purchasing Manager Index (PMI) data that can best be desribed as anaemic. Despite clear signs of slowdown, the US Federal Reserve last week made a second 75bp hike in interest rates, helping support a USD index that had earlier begun to ease from recent 20-year highs. 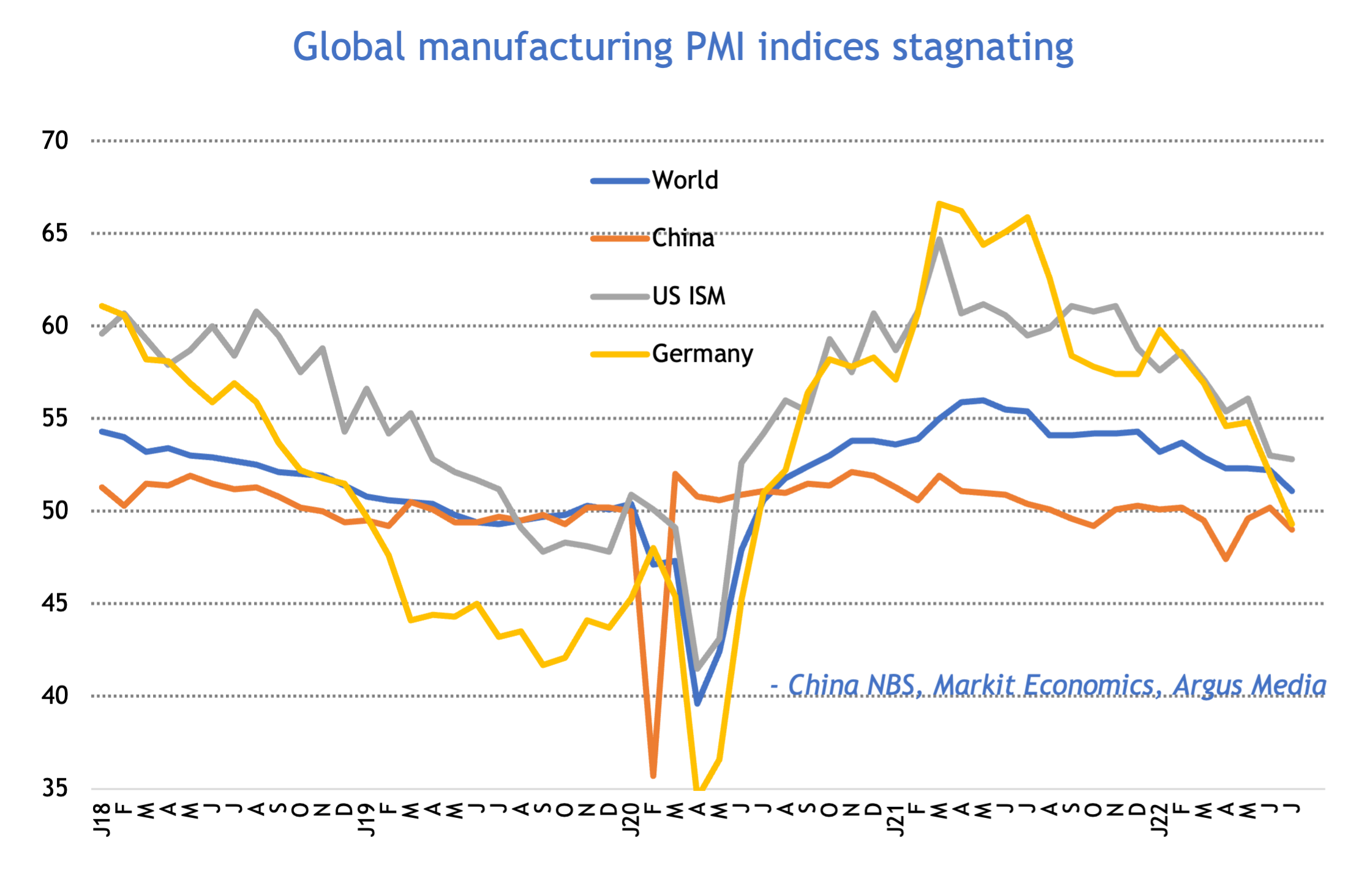 Despite slowing activity levels, supply chain and labour bottlenecks remain prevalent worldwide, even if the New York Fed’s Global Supply Chain Pressure Index is now easing  from its late-2021 high-point. With consumer price inflation in major Atlantic Basin economies flirting with double-digits, policy is now firmly targeted on curbing price growth, even if that risks adverse consequences for economic activity and employment. And while inflationary pressures are less pronounced in Asia, knock-on impacts of USD strength are being felt there too.

China’s 2Q22 GDP growth registered just +0.4% yoy, with government spokesmen now acknowledging an official target of +5.5% for 2022 is more an aspiration than a realistic prospect. The Chinese economy continues to grapple with an ongoing “dynamic net-zero” Covid policy and the impact of a year-long clamp down on liquidity for a real-estate sector representing 25-30% of national GDP. Third-party estimates for China achieving a more modest +4% GDP growth in 2022 depend on the effective deployment of fiscal stimulus to boost infrastructure investment, allied to some cautious monetary easing to ensure “acceptable” growth levels in a year of major political importance for the CPC and President Xi himself. All this while a depreciating Yuan renders commodity imports still more expensive, and as the government scrambles to avoid capital flight – something that is also hampering its efforts at monetary policy easing. 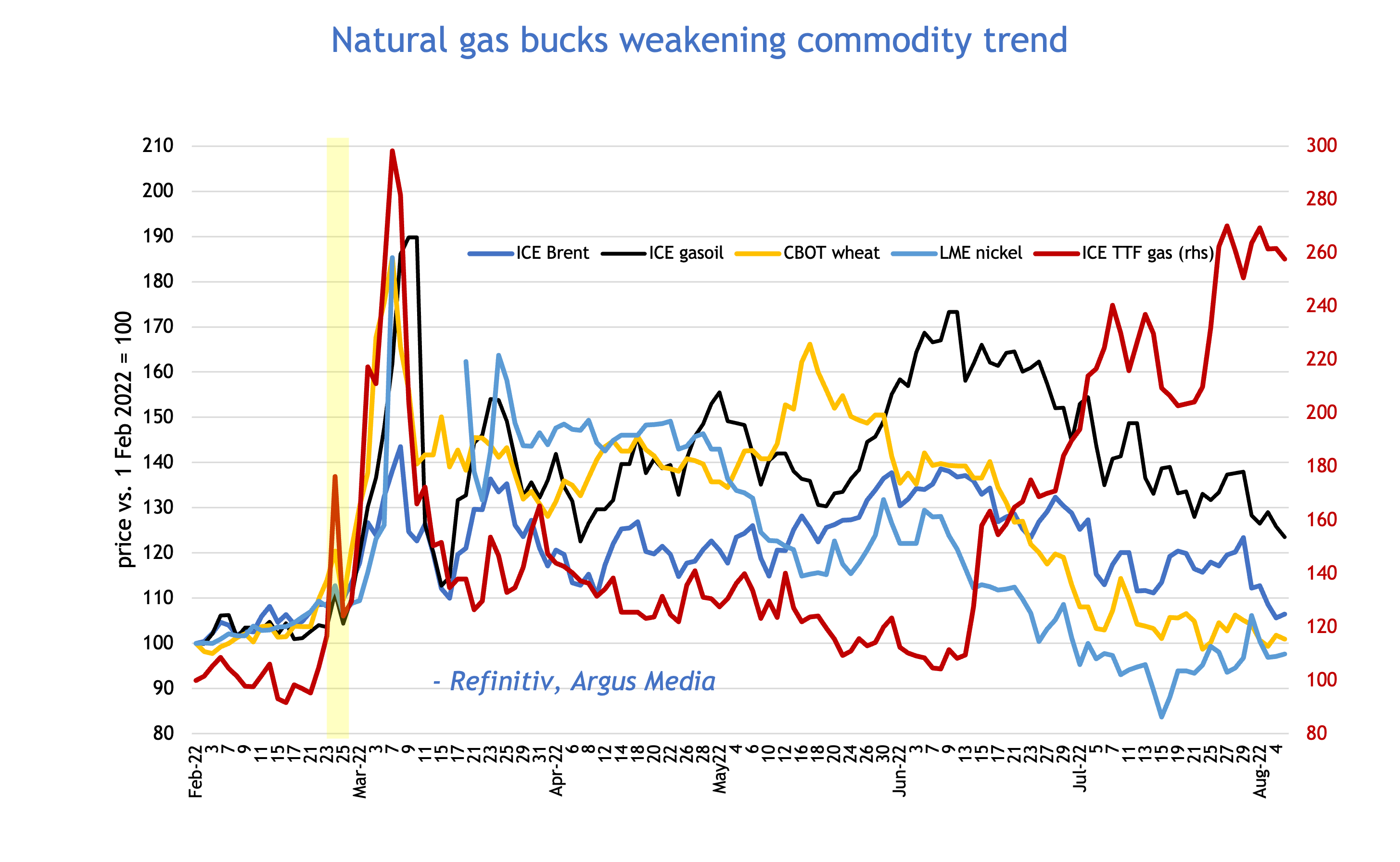 Other commodity-intensive emerging markets (EMs) are also feeling the pinch from the US Federal Reserve’s declared war on inflation via higher interest rates and a strengthening USD. Like China, the EMs face capital flight. Further cyclical pressures derive from the appreciating “greenback”, including higher debt-servicing costs, the knock-on impacts from China’s economic slowdown and the risk that local currency depreciation stokes further domestic inflationary pressures. From a more structural standpoint, developed economy moves to boost supply chain resilience for critical commodities and components also risk diluting the developing world benefits that have accrued from several decades of globalisation.

This erosion of worldwide macro-economic and commodity demand momentum is now feeding into weaker futures prices. Physical markets remain better supported, beset by supply chain issues as demand continues to recover from the depressed levels seen at the height of the pandemic. However, oil, metals and agriculture futures have weakened since June, the former two amid actutal or threatened demand destruction, and agricultural commodities in part due to the tentative deal now enabling resumed maritime grain exports from Ukrainian ports. European natural gas remains an outlier, as Russian pipeline supplies into the continent decline. With gas prices once again breaching $55/mmbtu, fuel switching might ultimately provide a partial offset for an otherwise weakening oil demand profile.

Join Spot Ticker reporter Jason Metko and Senior Vice President, Head of Global Oil Stephen Jones, as they give an update on the status of the US oil and fuels markets on the halfway point of the summer driving season.

The shunning of Russian Urals in Europe’s spot crude oil market has left a hole in supply, and also in price identification. To fill the gap, we have launched Argus Brent Sour – a new index that will help sellers and buyers agree price levels for heavier sourer grades.

From the Economist's Chair: Does the cap fit?

The US has persuaded EU and G7 partners to dilute their maritime insurance ban on oil shipments to Asia with a price cap mechanism, the structure, implementation and effectiveness of which remains highly uncertain.