The electricity sector accounts for around 27pc of the world’s greenhouse gas emissions (GHG). Given its sizeable contribution to GHG emissions, policymakers have sought to decarbonise the sector. Government incentives/mandates have helped accelerate the uptake of variable renewable energy (VRE) technologies, such as wind and solar. These electricity generation technologies are considered variable as their output is a function of resource availability at any point in the day.

Unlike electricity from coal or gas-fired power plants, the output from VREs cannot be altered by the power plant operator and are considered non-dispatchable electricity generation sources. Figure 1 illustrates the impressive pace at which the installed capacity of VREs has grown over the last two decades. 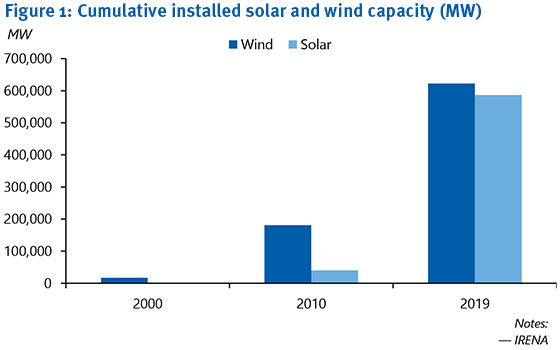 A consequence of these rapid capacity additions has been the falling price of VRE power. In several jurisdictions, the levelised cost of electricity (LCOE), which is a common metric to estimate costs of generating electricity over the plant’s lifetime, of VREs are lower than their fossil-fuel counterparts. Figure 2 illustrates this in the case of India.

As shares of intermittent electricity sources on the grid increase, there are instances where the supply of electricity exceeds demand. This requires curtailment of output from VREs or the reduction in output from fossil-fuel plants. Both options are expensive. For instance, Germany’s electricity redispatch costs have ranged between €1.2bn-1.4bn/yr between 2017-19.

A means of storing this excess electricity over weeks and months rather than hours could allow for deep decarbonisation of the electricity sector while reducing system costs. This store of excess electricity could be called upon when demand for power exceeds supply. Long-term electricity storage would also complement the seasonal variations of output from VREs. 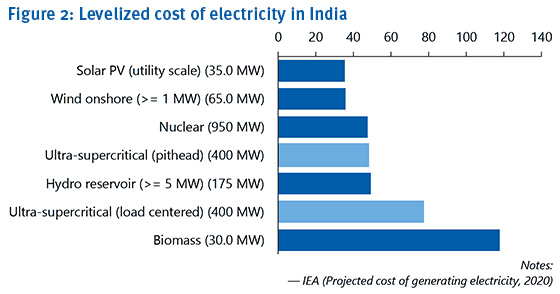 Hydrogen is under consideration as an effective means of storing excess electricity. When the supply of electricity exceeds demand, electricity prices fall. This cheap electricity is expected to be used to produce cost-effective hydrogen via electrolysis and stored over ground in tanks or underground in salt caverns, depleted natural gas or oil reservoirs.

One issue is that at low utilisation rates, the cost of producing hydrogen via electrolysis rises. The economics of the production pathway requires careful analysis to ascertain the economic feasibility of the process. Underground storage allows for a much larger scale of storage for long periods.

Hydrogen is expected to be quite competitive with battery technology in this regard. This stored hydrogen could either be blended with natural gas to produce power or burnt directly in power plants when electricity prices are high.

The commercialisation of solid oxide fuel cells, which also produce usable heat, would allow efficient use of the hydrogen stored and facilitate distributed power systems. Fuel cells also have a higher efficiency than combined cycle gas turbines (CCGTs). The losses along the production and use pathway when CCGTs burn hydrogen are higher than when fuels cells consume the hydrogen.

Hydrogen could provide an avenue for extant natural gas-fired power plants to decarbonise. As of last year, global natural gas-fired generation capacity was around 1,900GW. Most CCGTs in use can handle blends of natural gas and hydrogen. But the limit on the volume of hydrogen in the blend varies, depending on the turbine model and vintage.

Aside from the constraints imposed by the turbines, infrastructure might also impact the hydrogen blend ceiling. For instance, the existing natural gas piping system might be acceptable if a low concentration of hydrogen is used. At high levels of hydrogen, a fuel accessory system configured for the required flow rates is required.

To ensure proper control of the mix and safety, hydrogen would have to be transported to the plant separately from natural gas. This would necessitate a fuel blending system. All of these would add to the costs of producing electricity but help power plants decarbonise.

While some power plants might be able to decarbonise via carbon capture and utilisation/sequestration (CCUS), blends of hydrogen might be the only means available for others. Hence, the zero emissions targets imposed in several countries might underpin hydrogen’s use in the power sector.

Turbine manufacturers are developing power plants that run 100pc of hydrogen producing zero emissions power should green hydrogen be sourced for the plant. These turbines are expected to be commercially available by the end of the decade.

Hydrogen might also decarbonise coal-fired power plants. Trials are underway in Japan to determine the techno-economic feasibility of co-firing ammonia, which is a carrier of hydrogen, with coal. As of 2020, global coal-fired capacity stood at 2,150GW. Co-firing coal with ammonia up to 20pc by energy content would reduce emissions from these plants by around 1.7bn t of CO2 per annum if green ammonia is used.

In principal, the demand for green ammonia co-firing would raise the seaborne ammonia trade by multiples of the 20mn t/yr that it currently stands at. Investments in infrastructure would be required to make trade possible.

Hydrogen, which makes the trade of renewables between countries possible, has gotten policymakers quite enthusiastic as to its potential to decarbonise the economy. This is especially true for countries that find it harder to decarbonise using renewables given their lower resource endowments of solar and wind.

Hydrogen’s use as a fuel in the power generation sector would require technical progress, development of new and economically viable supply chains, construction of infrastructure and sustained policy, especially in countries where the hydrogen will be consumed to produce electricity. Should these come to pass, hydrogen might be able to aid deep decarbonisation of the power sector.

Argus’ consulting team is well-placed to research and advise on the possibility of extending hydrogen use. Argus Consulting has conducted a feasibility study on hydrogen imports and downstream applications for a southeast Asian country.
Click here to contact us to find out more details or how this trend will affect your company.