The price volatility of the energy complex is higher. From January to February, the North Sea Dated (NSD) crude oil price averaged $87.37, a high last seen in October 2014, before the global crude price drop accelerated due to massive production oversupply. The NSD price climbed to $137.90 on 8 March before settling to $97.45/bl 25 April. Argus forecasts see NSD drifting to $98/bl average by June based on prevailing conditions, far above 2021 averages.

This volatility spans the energy complex. For example, Natural gas prices at the UK’s National Balancing Point (NBP) have recently varied significantly. While the NBP average for 2021 was $15.97/mmBtu and just $9.38/mmBtu for the first three quarters, prices spiked to $37.52/mmBtu in October, followed by a spike to $59.82/mmBtu in December. The situation in Ukraine intensified the context, spiking prices briefly to $65.26 on 7 March. Similarly, the Dutch TTF prices reached $30.30/mmBtu on 27 April 2022. Before significant price volatility began in early October 2021, TTF prices had not spiked above $30 since March 2018. 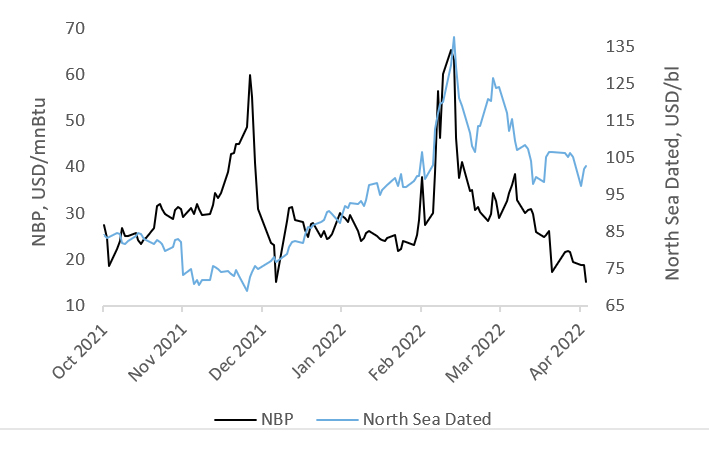 The price spikes in European natural gas and the North Sea Dated (NSD) crude index highlight the energy situation in Europe. The price variations in the last year are historic, with increased frequency and larger amplitude relative to the previous five years.

Economics modeling based on a flexible mixed-feed steam cracker in northwest Europe shows 25 April cash margins for propane feedstock at $731.87, versus a butane cash margin of $472.39 and a naphtha margin of $516.61. These margins represent a substantial improvement from a month prior, where margins for butane and naphtha were negative during most of the previous two months. The ethylene contract price in Europe passed $1,839/t on 1 April, climbing over historical averages.

A variety of issues contribute to how quickly margins can compress or expand. One is flexibility. Per our modeling of potential European steam cracker feed slates, the percentage of crackers capable of utilizing ethane feedstock represents just 12pc of steam cracker capacity in western Europe. Comparatively, some 85pc of capacity is capable of using naphtha. Still, many crackers in Europe have the flexibility to switch between fuel oil, LPG, and naphtha.

Overall, the sustained rise in the energy complex weighs margins. Abrupt step-up in near-term energy costs and higher base throughout the forecast feeds product prices. Sustained higher prices can lead to demand softening throughout the value chain. 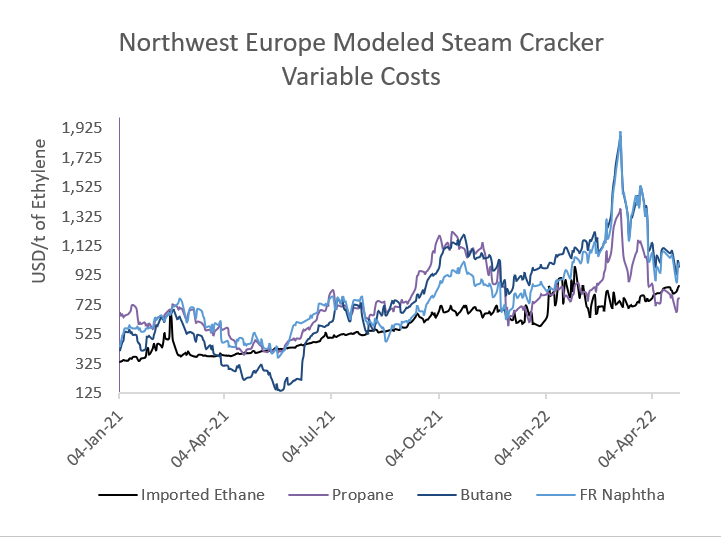 Another issue is freight. Freight issues continue to create a disconnect between global regions, potentially causing demand to falter and pull prices downward.

Compounding this is container shortages impacting various petrochemical products and transport cost increases on the higher base of the energy complex. High freight prices will work their way through the value chain and offset demand. Although not as significant as feedstock and product price dynamics, such issues underpin them, and when margins are narrow, their relative importance increases.

Energy prices were rising to five-plus year highs in the run-up to the situation in Ukraine. The dependency on Russia for Europe’s energy complicates factors. Shutting off Russia could be difficult, causing prices to rise further. Reliance on external sources for energy is a risk but, at times, a necessity.

Recent developments in Europe have demonstrated an increased response to energy complexity. While the Netherlands aims to halt Russian gas imports by the end of the year, the EU has published sanctions against Russia, including coal, wood, polymers, and bans ships owned, operated, and chartered by Russian entities from entering its ports.

Given the far-reaching implications, some European countries have questioned the prospects of completely shutting off Russian gas. A complete EU ban on Russian natural gas imports could send prices up at the TTF to three times prevailing rates, contends Germany’s Bundesbank. Germany has recently amended legislation to improve response to supply shocks, such as establishing trusteeships for any infrastructure operator issues that may create risks to supply while also requiring additional approval to close facilities.

Russia now reportedly demands that European buyers pay for their gas in rubles. Gazprom has recently cut gas supplies to Poland and Bulgaria in response. In the short term, the dependence on Russian oil and gas will pressure steam cracker economics in Europe, on energy, correlated feedstock prices, and overall demand predicated on economic performance that may come under pressure in the months ahead. Sustained demand destruction amid shortness in energy and feedstock supply could complicate margin economics for producers.

Gaining insight into changes in market dynamics is crucial to securing accurate market intelligence. We invite you to review our reference and modeling approach document that demonstrates the components of our method of tracking and forecasting global steam cracker margins for three key regions. The three-month forward view is beneficial in considering how LPG and naphtha-based steam cracker economics will shift short-term.

If you would like to read more about this monthly forecast service and request trial access, please review the Argus Global Steam Cracker Economics product page and contact Argus for more information.

Argus European monthly methanol CP down €47.5/t in May

Join Amy Strahan, Editor of Argus NGL Americas, and Brian O’Rourke, Manager Business Development NGLs and Olefins, for a discussion of US petrochemical consumption of propane and the corresponding impact on North American propane markets.

This episode is driven by data and insight from Argus Global Steam Cracker Economics, a global monthly report and downloadable dataset.