Rough is the UK’s largest and only significantly sized gas storage site, with the UK NBP gas hub registering large prices movements after the announcement.

There are two main ways in which it may affect the LNG market.

The winter 2016-17 contract jumped by 6.67pc at the end of last week to $6.21/mn Btu, as Rough gas will now be unavailable this winter — although Centrica is investigating the possibility of some limited withdrawals from November. And the August contract dropped by 5.7pc to $4.36/mn Btu, because gas that was expected to be stored at Rough now has to be sold in the spot market.

As explained in my previous blog post, when the NBP price moves, the LNG market takes notice. The Argus northeast Asia (Anea) spot LNG price premium to NBP was only 69¢/mn Btu in the first half of this year.

Secondly, there could be demand for more LNG.  And actually, if Rough is off line for any period, this would be the best time in the past few years to secure spot cargoes, with LNG prices continuing to fall. 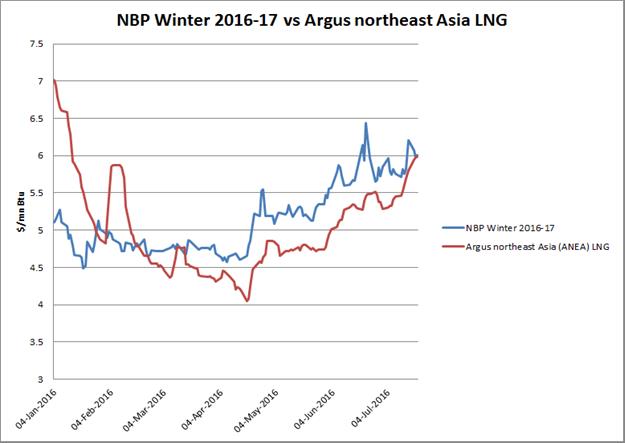 The US Henry Hub  Oct – March 2016-17 strip averaged $3.06/mn Btu yesterday, while the NBP winter 2016-17 contract reached $6.01/mn Btu. The spread between the Henry Hub and NBP gives plenty of opportunity for US exporters to deliver LNG to the UK. The 25mn t/yr Sabine Pass project started up this year, with the first two 5mn t/yr trains expected to be operational before winter.

Lower crude prices and new production in the past two years have put pressure on LNG values. LNG projects in Australia, Papua New Guinea, the US, and Angola could add almost 60mn t/yr of new export capacity by the end of this year compared with 2013.

The UK also has ample LNG storage at its three underutilised terminals, which could become more valuable with Rough unavailable.

But the UK may not need spot LNG at all. The country could burn more coal for power generation and use the gas to cover heating demand. NBP front-winter prices have risen by enough to attract pipeline imports from the continent.

UK gas prices are likely to be especially volatile this winter, with the Rough stoppage reducing flexibility. But LNG is there if it is needed. If you’re willing to pay for it.